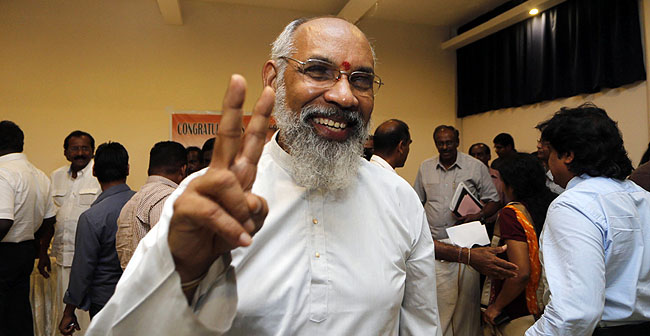 In August 2009, a Municipal Council election was held in Jaffna, the most populous district in the country’s North in which the UPFA captured 50.7% of the popular vote and 13 out of 23 seats on the Council.
When the country held parliamentary elections in 2010, the TNA won the majority in nine out of ten polling divisions in Jaffna district. Overall in Jaffna, TNA won nearly 44% of the vote while the UPFA won just over 32%. In Kilinochchi polling division – also a part of the Jaffna electorate – TNA won 45.51% of the vote and UPFA obtained 36.55%.

In July 2011, Local Authorities Elections were held in Jaffna. Those results pointed to widespread dissatisfaction with the UPFA. Elections were held for 16 local government bodies. The TNA won the vote in 13 of those contests. The three won by the GoSL – in Velanai, Delft and Kayts – were strongholds of the Eelam People’s Democratic Party (EPDP). Overall, TNA captured at least 63% of the vote and UPFA 34% of the vote.

In the recent September 21, 2013 NPC elections, if one takes Jaffna and Killinochchi, the TNA received 82.8% of the vote while the UPFA garnered just over 16.1%.
The trend is unmistakable.

Analysis
The present administration had to have known it was bound to lose this election; a vote the GoSL needed to hold in light of sustained international pressure, the upcoming Commonwealth Heads of Government Meeting (CHOGM) in November and the 25th session of the United Nations Human Rights Council (HRC) in March 2014. Nonetheless, it’s hard to imagine that they expected to be defeated so soundly.

Since the GoSL’s victory in the 2009 Jaffna Municipal Council elections, one has been able to discern a steady erosion of popular support for the present administration. Recent electoral results in Jaffna are representative of a larger, more profound shift – support for UPFA declined from 50.7% to 16.1%.

Immediately after the conclusion of war, it’s true that many Tamils were perplexed about the next stage of Sri Lankan politics – perhaps hoping for the political solution that has so consistently been promised to them by the administration and genuine progress towards reconciliation. In July 2009, some members of TSA who had pondered this very issue remember being told by people going to the polls, “If we vote with the heart we’ll vote for TNA and if we vote with the head, we’ll vote for UPFA.”
Times have changed.

The military’s persistent intrusion into all aspects of peoples’ lives, increased centralization, institutionalized impunity and widespread land expropriation are all major problems for the Tamil community. Besides, reconstruction and development policies which have promoted exclusion and the unequal distribution of benefits have further antagonized people. The bottom line is that community members in the Northern Province are fed up with UPFA.

The present administration has had its chance to prove to people in the North that it is capable of crafting post-war policies that allow Tamils to live with some sense of dignity and peace. Regrettably, the administration has failed to do that.

The people of the North have sent a clear message to the UPFA: “No amount of development can equate to living in dignity.” Sam Cooke’s classic, ‘A Change Is Gonna Come’ (1964) lingers when penning this piece.
Conclusion

The NPC election results are a big victory for TNA. However, they are also a reflection of how dissatisfied people are with the present administration’s policies – meaning that the outcome of this election is a much a referendum on UPFA as it is an outright victory for TNA. More than four years after the war’s tragic ending, it looks like the Tamil community has voted with both its head and its heart.

TNA’s first time in power is bound to be a challenge. Governing will be difficult and there’s already well-founded speculation that the powers vested in the provincial councils will be further diluted.
That being said, TNA needs to remain pragmatic, act strategically and understand that infighting will only embolden the administration in Colombo. If TNA’s going to protect the future of Tamil politics, it cannot forget the past.
Whether the party will rise to this historic occasion remains to be seen.
By AP News
###
Gibson Bateman and Rathika Innasimuttu are founding members of The Social Architects (TSA). Follow TSA on Twitter @soc_arch.