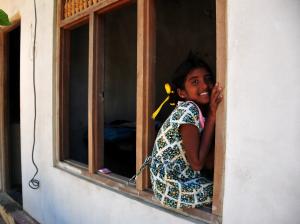 PUTHUKKUDIYIRUPPU- Genzia Mary, 10, is fascinated by the buses arriving in northern Sri Lanka, their jovial travellers singing in a language that, until two years ago, was completely foreign to her.

Mary lives in Kilinochchi District, part of the country’s northern former war zone popularly known as “the Vanni”. Thousands of southerners, mostly from the majority Sinhala ethnic group, come to visit war attractions as well as a well-known Buddhist temple north of the Vanni.

“There are lots of people in [the buses]. Sometimes there are old ammas [grandmothers] in them, all dressed in white,” she said. Many girls her age also visit, especially during school holidays. “But I have never spoken to anyone of them,” Mary said, disappointed. “They never talk to us.”

For years, the Vanni was cut off from the rest of the country. It was the main battle ground during two and half decades of civil war, as the Liberation Tigers of Tamil Eelam (LTTE) rebels fought successive governments, demanding a separate state. The war ended in May 2009 with LTTE’s defeat.

In late 2009, parts of the region were opened for unrestricted civilian travel, and thousands of travellers from the south began streaming in. The numbers have dropped from highs of over 100,000 a day, but they still figure in the thousands.

These visits could help bring communities inside and outside the war-scarred region together, but, so far, that has not been the case.

“The two communities still live in two separate cocoons. There is hardly any interaction,” said Saroja Sivachandran, head of the Centre for Women and Development, a women’s rights group in northern Jaffna. “One example of how far the gulf is: the visitors will sometimes bring their own fire wood. The only interaction with the Vanni population is if they ask for directions,” she said.

Mahendran Sivakumar, 61, is a retired government education officer who remained in the Vanni even during the bloodiest years of fighting. He said interaction with southern visitors is limited because mistrust lingers from the decades of bloodshed and isolation.

“It will take another generation to break the ice. Unfortunately no one [in authority] seems to doing anything tangible to bring them together,” Sivakumar said.

He said there is still a significant military presence – mostly Sinhalese – in the Vanni’s civilian affairs, contributing to Tamil distrust. More than three years after the end of the war, the military still plays a large role in daily village life, from attending school events to repairing water distribution networks. “If the military role in civilian affairs is reduced and we see public and elected officials taking a larger role, then people will begin to feel that at last this sense of being watched is over. But it will not happen overnight.”

Tens of thousands of security forces are posted in Northern Province – at least 80,000 according to
analysts in the north – but there are few other Sinhalese in the region.

Sivakumar said southern visitors mostly mingle with government soldiers and other Sinhalese service personnel in the Vanni. “It is obvious they feel most comfortable with those who speak the same language.”

With few chances to interact, deep divisions remain between the Tamil and Sinhalese, the country’s two main ethnic groups.

“Most of the tour buses will travel through areas devastated by the fighting, with families living in huts. But they [visitors] don’t seem to care,” Sivachandran said.

A woman walks past a wall at the former railway station in Northern Jaffna, splattered with bullet holes and graffiti left by southern tourists

She blamed the apparent indifference on ignorance. “The visitors are clueless as to what happened here, or only know part of the story. For those living in the Vanni, especially the interior, the tourists are alien.”

It does not help that there has been no national recognition of civilian deaths, stripping northerners of the chance to mourn properly, added Sivachandran. “Some of us feel like there is searing pain within that we cannot let out. The more it stays in, the more painful it is. Also, this idea of winners and losers has to end. If it’s one country, then there are no winners and losers, only survivors.”

Some 40,000 civilians died in the bloodiest stage of fighting before the government declared an end to the war, according to a UN expert panel.

The furious pace of reconstruction masks the lack of rapprochement between the Tamil and Sinhalese, said Ruki Fernando, a human rights advocate who formerly headed the Human Rights in Conflict Programme at the Law and Society Trust, a national advocacy body.

“[Mega development projects] give a false sense that things are moving here. But nothing much has happened to make a Vanni civilian feel he can trust the south.”

Officials say it may take years to finish repairs. Meanwhile, ethnic reconciliation has slipped as a priority, even though it is as essential to moving beyond conflict as physical repairs, said Fernando.

There have been few grassroots efforts to bridge the ethnic and cultural divide between Tamils and Sinhalese. But several small-scale, ad-hoc exchange programmes are helping to widen people’s perspectives.

Since January 2011, the NGO International Alert has organized three visits to Sri Lanka – including the north – for the UK-based Sri Lankan diaspora.

Johann Rebert, the NGO’s manager in Sri Lanka, said the country’s diaspora can play an important role in reconciliation efforts. “Engagement with them is more sustainable, and can lead to better outcomes, than shutting them out.”

The Colombo-based NGO Sri Lanka Unites, has also brought together youths from both communities, most recently for a conference in Jaffna this past August.

Prashan de Visser, the president of Sri Lanka Unites, counts some 10,000 members in Sri Lanka, 30 percent of whom come from the north. “We live in a very segregated society. Our focus is to allow the youth to break out [from] segregation,” he said.

If it’s one country then there are no winners and losers, only survivors.

De Visser said every year his organization takes 25 youth leaders from around the country on a month-long national tour. During this experience, he said, Sinhalese youths “finally” realize the enormousness of the destruction in the Vanni. “The three representatives from Hambantota, [the country’s southern-most district] in fact, pledged to raise Rs 300,000 [about US$2,300] for our work in the [northern] region. There is a lot of misinformation out there.”

Sivchandran, the women’s advocate, welcomed these initiatives. But she warned that without government support, such efforts will have limited results. “Agencies and activists who work on advocacy issues still sometimes find it hard to work effectively in the region.”

Bedevilling both activists and authorities is just where to begin to restore the community ties that existed before LTTE rebels killed 13 government soldiers in 1983, triggering widespread anti-Tamil riots in other parts of the country.

After 18 months of investigation, the Lessons Learnt and Reconciliation Commission, set up by the government in May 2010, concluded “human rights issues are critically relevant to the process of reconciliation.”

Between January and May 2009, the government reported 2,635 missing persons were “untraceable” in Northern Province. Between December 2009 and mid-2012, the UN Children’s Fund (UNICEF) office in Sri Lanka reported 747 cases of missing children.

“You have to answer the questions on the missing, deaths and alleged abuse truthfully, once and for all,” said human rights activist Fernando.

He also criticized the country’s main Tamil political party, Tamil National Alliance, for making power devolution a prerequisite for reconciliation. Tamil political leaders have pushed for power decentralization to address the discrimination that they say led to the conflict. But an influential group within the government is campaigning to scrap a constitutional amendment that, in 1987, set up power-sharing provincial councils, which are now widely regarded as ineffective.

“It is all good if effective power devolution takes place, but by focusing exclusively on that, we take away the importance of other underlying issues,” Fernando said.

Though a complicated issue, ethnic reconciliation is possible, said Sri Lanka Unites president de Visser. “We have inherited a mess, but this is also an opportunity for us to build strength among youth and foster unity.”