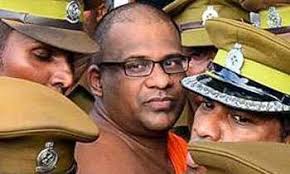 The letter signed by a set of powerful Buddhist leaders including two Mahanayakes and the Diyawadana Nilame of Dalada Maligawa, and addressed to Buddha Sasana Minister Gamini Jayawickrema Perera, appealing for the release of Galagoda Aththe Gnanasara Thera from prison, and in turn, the Minister’s recommendation to President Maithripala Sirisena (MS) to comply with that appeal on compassionate ground, seem to be a carefully calculated but sinister move to maximise its political advantage to competing parties.

President Sirisena (MS), opposition leader Mahinda Rajapaksa (MS), and Prime Minister Ranil Wickremesinghe: all three would like to claim credit for Gnanasara’s release, but it is the politics behind this ostensible compassion that should worry a discerning public.

Gnanasara is not an ordinary innocent monk sent to jail without justification. The Judiciary found this monk, who is also the General Secretary of the far right Bodu Bala Sena (BBS), guilty of contempt of court over the hearing of the case of missing journalist, Prageeth Ekneligoda. However, he and his BBS, even before his incarceration, have been alleged to have involved not only in planning and executing but also participating directly in a number of racial and religious disturbances targeting minorities.

There is ample video recorded evidence that had gone viral to prove this monk’s un-Buddhist and uncivilised behaviour. Yet, it is disappointing that Gnanasara’s obstreperousness and unruliness have not received at least a public rebuke if not outright condemnation from the Sangha. Instead of him being de-ordained and de-robed to protect the sanctity of Buddhist Sasana and cleanse the Sangha of elements like him who tarnish Sangha’s compassionate and purist image, Mahanayakes are appealing to the President for his freedom, so that he could continue doing in the future what he had done in the past. (See my piece in CT, 12 April 2018 on ‘Sangha Needs Cleansing’.)

By this move the signatories of the letter have shown their utmost disrespect to the judiciary of the country. One wonders whether these petitioners acted on their own volition and in the interest of Buddhism and the nation or have fallen prey to sinister motives and manoeuvres of some politicians. In all probability it is the latter that seems to have motivated their action. Who is/are actually behind this scheme and why?

To start with, MS’s unconstitutional parliamentary fiasco and its aftermath has created greater volatility in domestic politics and severe financial strain and productivity loss to the economy. Politically, even though UNF has won a reprieve to govern until the end of its term, the government is actually on life support and can only mark time before facing another election, which MS and MR want to be held soon and they have determined to exploit every opportunity that arises to make it happen. While UNF wants to protect the support it receives from TNA and Muslims, the opposition wants to maximise its vote bank from the Buddhist majority.

The President in the meantime, who is more interested in ensuring his chances of occupying the Presidency (with its powers undiminished) for another term than in the welfare of the country and its people, is desperately seeking political alliances (even with the devil) to achieve his objective. The country’s economy in the meantime has fallen prey to these political manoeuvres. Any long term measure and hard choices to be made to reverse the economic descent will be sacrificed in the interest of populism and political expediency.

In the absence of any sound economic program or blueprint to present before the voters, political contestants will be looking for other vote catching issues to win the race. In the political history of this country almost every election since 1950s was fought on ethnic and religious grounds. It is to exploit these explosive issues that the utility of a person like Gnanasara will become handy to whoever who could buy his and BBS support. The question is who stands to gain most by the release of this confrontationist and rabble rousing monk?

Because of Gnanasara’s open hatred of ethnic and religious minorities and direct involvement in a number of anti-Tamil and anti-Muslim violence, RW and UNP that are depending on TNA and Muslim support for survival stand to lose the most by his release. However, the appeal for his release originating from the Buddhist hierarchy cannot be opposed or rejected easily by RW, because the cost of that rejection in terms of Buddhist votes will be greater than the damage arising from his release. Hence, the least costly action for the Government would be to recommend the release rather than just forwarding the letter and leave the final decision to the President. This explains the recommendation of the Minister concerned. He and his Government can claim some credit for Gnanasara’s release.

The one who desperately want to claim credit is MS. There are news reports that the president was already in talks with BBS regarding the matter. By pardoning the monk if MS could win BBS backing, that would enable him to make inroads into SLPP vote bank in case MR and his party were to nominate Gotabaya Rajapaksa (GR) to run for presidency.

It is not a secret that BBS in the 1915 presidential elections supported MR. Did MS therefore engineer this letter to cover a decision that is fait accompli? If the president initiated the letter why should the Mahanayake of Malwatte sign it, who virtually slapped MS when the prelate refused to meet MS during the constitutional crisis? Has the Mahanayake switched side?

MR and GR always carried the support of Gnanasara and BBS. The two brothers never condemned Gnanasara’s un-Buddhist obstinacy and public unruliness. At best they remained silent. It is to their advantage therefore to get this monk released before the election. So, did MR also have an input into the missive for presidential pardon?

From whichever angle one looks at, the political agenda behind this ostensible compassion is crystal clear. If compassion is the ground for his release why shouldn’t the president extend his compassion and release at least a few other political prisoners who are languishing there for nearly a decade without being brought to trial? If at all this monk is going to be released it should be strictly conditional. Let MS consult his Indonesian counterpart, who is also reconsidering his decision to pardon the Muslim leader Abubucker Basheer.

Recently, even some far right Hindus are appealing for Gnanasara’s release. It is not difficult to understand their motive in the light of rising anti-Muslim feelings among Hindus of Eastern Province.

On the other hand, all three contestants, RW, MS and MR may have overestimated the political usefulness of Gnanasara, because the voting Sinhalese public is fully aware of the damage this person has caused to public peace and communal amity.

Finally, what will be the reaction from the Judiciary to MS’s pardon? Only the legal community can answer this question.