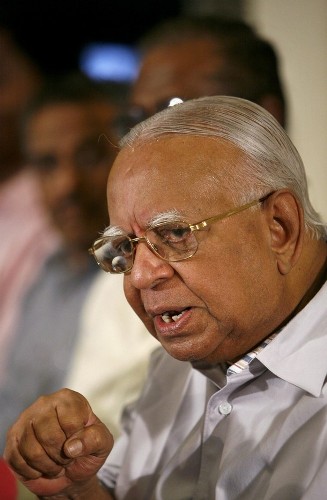 by Chandani Kirinde
Tamil National Alliance (TNA) Parliamentary Group Leader Rajavarothiam Sampanthan spoke to the Sunday Times after his Party secured a landslide victory in the local government elections in the North, despite widespread use of state power by the ruling party that pulled out all stops to secure a win there.
Mr. Sampanthan said the Government should recognize and respect the verdict of the people of the North adding that his Party was willing to extend maximum cooperation to achieve a workable and durable solution to the conflict.

What is your take on the results of the local government elections in the North where the Tamil National Alliance (TNA) won convincingly?

In every one of the majority Tamil Pradeshiya Sabha areas in the north and the east, other than the three in the island area in the North, the TNA has been returned to power convincingly. The islands in the northern area have been under the control of a para military group for the past 15 years. It was not possible for other parties to carryout a proper polls campaign in these areas.

Those results in my view do not reflect the verdict of the people. A victory of this magnitude has been achieved by the TNA despite very severe odds. A large number of people are still not resettled and were unable to exercise their franchise. The names of a large number of people had been omitted from the electoral registers and they had no vote while many others who did not have their NICs were unable to exercise their franchise. There was no level playing field in these elections. The electoral turf was under the control of the government that deployed its entire machinery both security and civilian to further its elections fortunes.

From the President downwards, many important politicians and ministers campaigned for the government. The Northern Province Governor was also part of the campaign. Leading military officials made political statements and the lower rung of the military engaged in various election malpractices. The voters were threatened, intimidated and subject to duress and undue influence. They tried to bribe them.
Water pumps, washing machines, bicycles, sprayers, vertis, saris and even money were lavishly distributed. Foundation stones were laid for several projects . Despite all these actions the people quietly cast their votes.

The government’s main campaign was development. The TNA’s campaign was based on effective resettlement and rehabilitation, housing, livelihood opportunities, suspension of several detrimental actions pertaining to land in these areas as well as a political solution which would address the needs of the people of the north and east. The people clearly demonstrated that their democratic sovereign right could not be hijacked on the pretext of development and that there was a more fundamental concern that needed to be addressed. Our earnest wish is that the government would recognize and respect the verdict of the people.

Where did the government misread the needs of the people of the north?

The government’s sole agenda of development activities cannot serve the needs of the people of the north, east or the south and west. Fundamental issues such as democracy, good and acceptable governance, human rights and fundamental rights, the independence of institutions which can ensure the preservation of these values and people being able to live with self respect and dignity are fundamental.

By spending money, you cannot achieve these values. The government has already learnt this lesson in so far as the Tamil people of the north and east are concerned.

You have had several rounds of talks with the government. Will the election results have a bearing on future talks?

I would only hope and request the government to take cognizance of the verdict of the electorate. They must not fail in their duty. The democratic will of the people and the message that they have conveyed must not be disregarded.

Do you feel the talks are moving in the right direction or are they just a waste of time as usually happens with such negotiations? Is there a genuine interest on both sides to move forward?

There is an imperative need for something acceptable to come about particularly in the context of these talks taking place at the end of a cruel war that inflicted much suffering on the people in this country. We are engaged in talks with the aim of achieving this objective. We do not want to return to violence. We would like the government to also realize that it has a responsibility to bring about an acceptable workable and durable solution to the conflict. We are prepared to extend to the government our maximum cooperation to achieve this. Unless the government is prepared to discharge its responsibility this will not happen.

The President has said he wants to appoint a Parliamentary Select Committee to draw up proposals for a possible solution to the problem?

There have been talks for so many years on almost every one of the issues that needed to be discussed
There have been previous select committees, some known to the public others not. There have been reports submitted by experts committees. The majority multi ethnic report came out when the APRC (All Party Representatives Committee) sat. .All this is available to the government to work out proposals for a political solution. Frankly I do not think a Parliamentary Select Committee, in this context is necessary. But we would like to know what exactly the government’s position is, its terms of reference and other modalities before we publicly announce a decision with regard to this matter. We don’t want to be seen as obstructing the government but we also want to be sure that steps taken by the government will have the capacity to bring about the desired result.

Do you see a role for India in this process?

India is the only country that has played a role for a long period of time after the anti Tamil violence in 1983.India’s good offices were accepted by the Sri Lankan state. India has always been helpful to Sri Lanka in a direct sense to preserve its unity and territorial integrity. There may have been some aberrations in the past but India can play a useful role and I think it is playing a useful role. The Sri Lankan government and the political leadership has discussed the issue with the Indian Government and its political leadership much more than with any other country. This happened because everyone accepts that India as our immediate neighbour can play a useful role.

What about the TNA’s relationship with India .You travel and meet with Indian leaders often don’t you?
We have all along worked with India just like we have worked with the Sri Lankan Government. We have also been in touch with India to achieve a good result for both the country and its people.
There is a lot of controversy regarding the Channel 4 video. How do you feel the government should handle it especially in the light of the UN’s claim that there are credible allegations of war crimes being committed?

When there are serious allegations made by responsible sources they need to be addressed. We may be wrong to think that things can be swept under the carpet by merely denying the allegations. Such a course of action would not be in the interest of this country and the people living in it. The country and people need to come out of this situation.

This can be genuinely done only on the basis of the truth being ascertained and solutions being worked out to take the country beyond this.
The Sunday Times