‘An Injury to One, is an Injury to All’- Let’s fight the Racism & Communalism 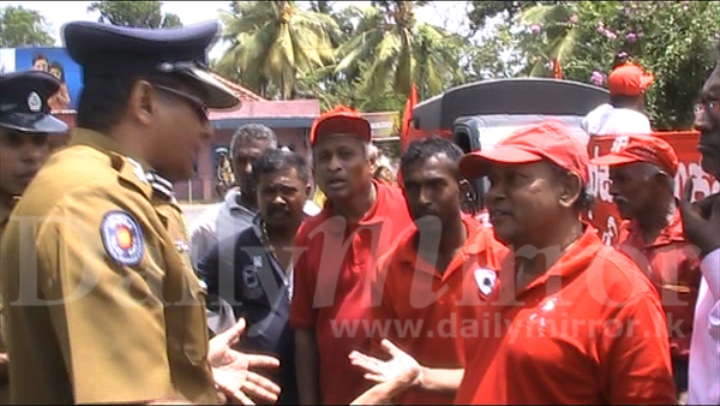 [Siritunga Jayasuriya in a argument with the Police at Aluthgama recently, after Police bloced their peace march]

Issuing  a media statement on behalf of the United Socialist Party, its leader  Siritunga Jayasuriya calls on left forces to come together along with all other progressive sections of our country to form a united platform of ‘Left & Socialists against Racism in Sri Lanka”and take on the challenge posed by the communalists and religious fundamentalists in this country.

The United Socialist Party wishes to thank all those Left Parties, Trade Unions and individuals who extended solidarity to us at the time of the launch of our initiative ‘Socialist peace March against Racism & Communilism’. We also thank all left parties who organised the press conference to condemn the brutal attack on USP Motor cycle march on 26th July. And USP is greatful to all those who showed us the sympathy and support to us after we were attacked and ambushed by the “Sinhala Ravaya and other extremist” thugs in Buddhist religious robes.

The initiative ‘Socialist peace March against Racism & Communal ism’ of the USP was to highlight the growing tendency of racism and religious fundamentalism in our country. The communalists who advocate majoritarianism are hounding the religious and ethnic minorities causing enormous damage to the unity of the people in this country. The USP through this initiative of peace march attempted to spread the message of unity and peace across the country including the villages.

We the Socialists and Left forces irrespective of the party flag and identities stand for a peaceful, united country where all religions, languages and ethnic minorities can live in harmony with full dignity as equals. Hence to decry the growing attacks both physical and ideological on these values of our society, we the USP launched the initiative marching against racism through a Motor Cycle Rally to Aluthgama-Dharga town from Colombo-Narahenpita..

Though it was symbolic, we wanted to send a message of confidence to those vulnerable section in our society that there are forces to defend their interests in this country. But the communalists such as Bodu Bala Sena, Ravana Balaya and others can not digest this move for unity, they want to play the cancerous politics of sectarianism, and further push this country to a bloodbath by their murderous activities.

While we condemn this gruesome attack on the initiative of ‘Socialist peace March against Racism & Communalism’, we feel it is a challenge that has to be met by all of us on the side of the left. ‘An Injury to One, is an Injury to All’, we call upon the left in general, Trade Unions, Socialist Parties, Groups, (big and Small ) to come together along with all other progressive sections of our country to form a united platform of ‘Left & Socialists against Racism in Sri Lanka”and take on the challenge posed by the communalists and religious fundamentalists in this country.

Siritunga Jayasuriya is leader of the United Socialist Party