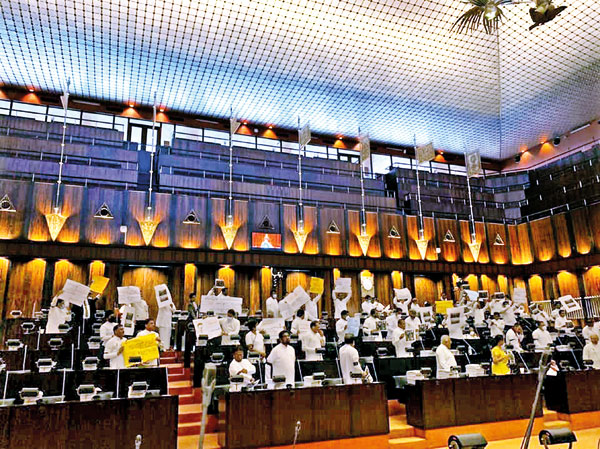 Image: The day before the debate: Uproar in House when Harin Fernando made a statement about Easter Sunday attack’ (Sunday Times photo)

It is the height of rather superb irony that the Abeyratne Commission of Inquiry tasked to look into allegations of political victimisation of public officers, employees of public corporations and members of the armed forces and the police during 2015 to 2019 and ascertain if any person or persons had unlawfully intervened into certain investigations, itself stands accused with good reason, of ‘unlawfully intervening’ into Sri Lanka’s judicial process.

To be blunt, the creation of this Commission, its manner of functioning and its findings, now poised to be ‘implemented’ by the Parliament turns this nation’s more than hundred-year judicial history unceremoniously on its head. As the Resolution before the House reportedly recites, among its recommendations are, outrageously, the withdrawing of indictments by the Attorney General in ongoing cases in the courts including in trials of gross corruption and human rights violations implicating many currently in seats of power.

Never mind that these cases have scarred Sri Lanka in the critical eyes of the world. Certainly it is folly to engage in acts of extra-legal ‘harakiri’ knowing that this would only give a fillip to international scrutiny in the face of Resolution 46/1 on Sri Lanka adopted by the United Nations Human Rights Council on March 23rd, 2021 which in fact, cites some of these cases as emblematic instances of human rights violations for which there has been no accountability. Even so, the betrayal here goes far beyond the pale of international accountability processes, let me be clear.

First and foremost, this Resolution (and not UNHRC Resolution 46/1) is a betrayal of ‘We, the People’ in a most fundamental sense. If this Resolution is approved and its ‘implementation’ secured through consequent legal instruments by the House including by those very members who are the focus of the cases that are recommended to be withdrawn, the practice, study and teaching of constitutional law will cease to have any meaning. Judges may well cease their judicial function and lawyers may leave their black coats (which many of them have undeniably disgraced) at home.

A mockery of the Rule of Law

This strikes first at the Bench and the Bar, let us note. It was reported with some mirth that the Government’s lawyers had, during submissions on the Port City Economic Commission Bill this week, responded to the objection that the Bill allow foreigners to sit on the proposed Commission by saying ‘so what? Even the Chief Justice can be a foreigner.’ Will we now hear, ‘so what? The Parliament is supreme?’ These are frivolities that must be dismissed with manifest contempt.

Not only content with reflecting the Abeyratne Commission’s recommendations that indictments be withdrawn, the House will also consider if calls for convictions entered into the trial court and affirmed by the apex court should be reconsidered. To complete this mad hatter’s tea party, it has also been recommended that prosecutors handling cases against those currently in power be ‘investigated.’ What mockery is this of the country’s legal system and the Rule of Law? The Resolution is not an artful strategy. Far from it. In fact, by resorting to such an unlikely device as a fact finding Commission of Inquiry to serve its purpose, the Government has demonstrated its mala fide in fighting shy of the judicial and legal process which has been activated in respect of these cases.

In other words, this malodorous exercise has been indulged in because of fears as to what might transpire in the judicial arena. To any reasonable ‘man or woman on the Clapham omnibus’, this speaks to guilt, irreversible and irredeemable. So to protect a few and their cronies, accused of the most unspeakable atrocities, does the nation have to pay? Let us not forget that this was a country founded on the bedrock principle that judicial power is vested only in the judicature, where indeed, it had been reposed for centuries. This was no abstract legal doctrine trapped within the stiff pages of a Constitution.

Instead, that principle had enormous practical force where any attempts to encroach on the preserve of the judiciary were jealously repelled. One of the earliest instances of course, known to any student of constitutional history is when legislation sought to imprudently vest the executive (the Minister of Justice) with the power to nominate judges to constitute a Trial-at-Bar. That attempt was summarily thrown out as an interference with the ‘strict’ judicial power of the State vested with the Court and the impugned power therein was vested with the Chief Justice.

Our judicial institution has certainly been chequered. We have had judges of the highest integrity and steadfast principle along with others who have ‘adorned’ the Bench with considerably less intellectual and moral strength. In the last two decades, the judicial institution has been more the topic of unseemly scandal than at any point since independence. This has been the subject of extensive documentation and scathing critique domestically as well as overseas. And as a practitioner and appalled observer of the grievous degeneration of the legal system and the forsaking of justice in its most substantive form, this regression has been particularly painful to witness.

But what we are facing now is far worse. This crisis does not concern the peccadilloes of a Chief Justice unable to occupy a most hallowed Chair with dignity befitting the post or the eccentricities of a legal system staggering under the weight of citizens seeking redress for their wrongs. Rather, it is the submerging of Sri Lanka’s judicial institution in one fell swoop and rendering it redundant. Is this part of a strategy of a Government which came into power on the basis that it will protect ‘national sovereignty’ but betrays that same sovereignty with most awful effect?

How can a Parliament ‘set aside’ court cases and convictions? Is this not the most clear evidence of contempt of court that one can find? If a parliamentarian is sentenced to several years for publicly criticising judges, what can one say of those who directly interfere in court cases or parliamentarians who act contrary to Article 4 c) of the Constitution which mandates that, judicial power shall be exercised by courts? Merely promising that the findings of the Abeyratne Commission will not be used to impose civic disabilities on opposition parliamentarians, as some in government ranks have sought to do, does not suffice.

This indeed, may be a red herring to divert attention from the cardinal constitutional sin that is sought to be perpetuated on the Sri Lankan people through this Resolution that is before the House. Hitherto, the complaint in regard to bodies appointed under the Commissions of Inquiry Act (1948) was that they were far too tame in nature, that their recommendations had not made any impact on those affected and that they were a waste of public funds. The excellent recommendations of many previous Commissions have been tossed into wastepaper baskets, including those of the Lessons Learnt and Reconciliation Commission, (LLRC).

It is one more tragedy among many others inflicting this country that while those Commissions were treated so rudely, the findings of this one Commission which so flagrantly exceeded its mandate is potentially poised to form the basis of ‘implementation’ by Parliament. Clearly, this is to benefit the political patrons named therein. This is how Sri Lanka is ruined and the very foundation of the nation-state destabilized.

For that we have ourselves to thank and not that convenient bogey of ‘international conspirators’, let us remind with force.