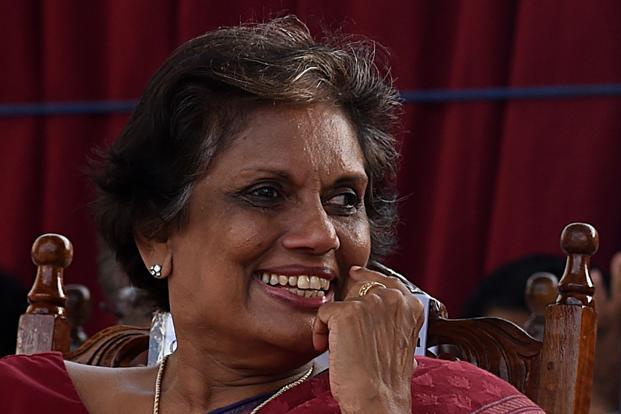 By Manekshaw.
A massive suicide bomb attack was carried out by the LTTE on former President Chandrika Bandaranaike Kumaratunga when she was descending from the platform after addressing the final rally of the People’s Alliance presidential election campaign at the Town Hall Grounds, Colombo on 18 December 1999.

The female suicide bomber managed to infiltrate the tight security ring which was put around by her body guards and ignite the powerful bomb she carried on her body.

The explosion with a big bang killed 36 people instantly and injured more than one hundred civilians who were cheering at the former President, while she was walking towards her vehicle.

Chandrika Bandaranaike Kumaratunga was rushed to the Nawaloka Hospital where her injuries were immediately attended to. She narrowly escaped the attack with an injury in her right eye.

Winning at the presidential election for the second time the former President was very emotional when she took her oaths with the dressing on her right eye for the injury in the presence of her mother, the late Sirimavo Bandaranaike who took her hand being sworn in as Prime Minister before her daughter, making the ceremony a very rare occasion.

Releasing the first statement over the brutal attack carried out on her by a woman LTTE suicide cadre, former President Kumaratunga mentioned: “Let not the LTTE terrorists destroy the last chance we have in transforming this country of ours into one of decency, harmony and modernism. The LTTE has now proved beyond doubt that they only know politics of terror.”

It was during President Kumaratunga’s period Jaffna Peninsula was regained from the grip of the LTTE and the outfit was made to retreat to Kilinochchi with the successful operation code named ‘Operation Riviresa’ carried out by the Security Forces.

With the attempt on her life and with several other assassinations of her confidantes such as legal luminary Dr. Neelan Thiruchelvam and former Foreign Minister Lakshman Kadirgamar, former President Kumaratunga wouldn’t have seen even in her wildest dreams that several years later she would receive an autobiography of a woman LTTE cadre who had written her past experiences as a member of the outfit.

Rathika Pathmanathan, who is a twenty four years old ex-LTTE conscript has launched her autobiography titled ‘There is a Darkness Called Light and I Grope for Myself in the Thick of It’ in the presence of several academics and think tanks at the Organization of Professional Associations (OPA).

Former President Chandrika Bandaranaike Kumaratunga who was the chief guest at the event, received the first copy of the autobiography written in English and appreciated the author Rathika Pathmanathan’s good effort in bringing out her story in book form.

Helpless ‘silent majority’
Rathika is from Kilinochchi, where the LTTE ‘reigned’ for fifteen years after its withdrawal from the Jaffna peninsula until it was defeated completely in May 2009.

Rathika telling her story to Ceylon Today said, she was born in Kilinochchi when the war was in progress and lived among the helpless ‘silent majority’ which had suffered in the hands in the LTTE.

Rathika who hailed from Ramanathapuram in Kilinochchi was conscripted along with scores of teenagers by the LTTE between the years of 2007 and the early part of 2009.

As it was rapidly losing its control of the Vanni region, the LTTE with the escalation of the military operation had made it compulsory to handover a girl or a boy from each home in the areas which remained under its control in Kilinochchi and Mullaitivu Districts.

Rathika who was at home after sitting for her GCE Ordinary Level Examination was conscripted along with several other teenagers when she was riding her bicycle in her village Ramanathapuram in December 2007.

The LTTE had sent Rathika for training with other conscripts and forced them to engage in the clashes with the advancing troops.

Rathika was injured in her knee when an artillery shell exploded near her when she was in a frontline point carrying an AK-47 assault rifle. Later she was admitted to the Puthukudiyiruppu Hospital and from there she was transferred to Colombo in an ambulance when the troops took control of Kilinochchi and Mullaitivu Districts.

It was at the National Hospital of Sri Lanka, Colombo, that Rathika when she was under treatment met another woman patient’s father named Upali Chandrasiri and later on he became a father figure to Rathika who had lost her parents in Kilinochchi.

Realizing the plight of Rathika and on the other hand understanding the real story of the young ex-LTTE cadre, Upali Chandrasiri introduced her to some of the academics attached to the Colombo University and being in an intellectual circle with her good wrist for writing poems and stories, Rathika has written her autobiography in Tamil and it has been later translated into Sinhala and English by her new found associates in Colombo.

Rathika, with the formation of an association called the Centre for Community Reconciliation with the participation of her mentors Upali Chandrasiri, Prof. S.T. Hettige and Dr. Piyadasa Gamage is now engaged in a project to explore the capabilities of the ex-LTTE cadres and the civilians affected by war.

A few months ago the biography of Subramaniyam Sivakamy alias Thamilini who had functioned as a political wing leader of the LTTE was released by her husband Jeyakumaran and the book was titled ‘Shade of a Sharp Sword’.
Rathika Pathmanathan’s autobiography is the second book to be released by an ex-LTTE woman cadre after the book of Thamilini which had brought out her story as a senior cadre in the LTTE.

The ex–woman LTTE cadre was extremely happy over the presence of Kumaratunga at her book launch at the Organization of Professionals Association (OPA) on Wednesday (10) in Colombo.

The participation of former President Chandrika Bandaranaike Kumaratunga at the book launch of Rathika and her praising the ex-cadre’s book is exemplary as the former President despite the attempt made on her life by the LTTE nearly 17 years ago, proved herself, a true Sri Lankan leader who stands firm on strengthening peace and reconciliation in the island.
http://www.ceylontoday.lk/columns20160321CT20170330.php?id=346