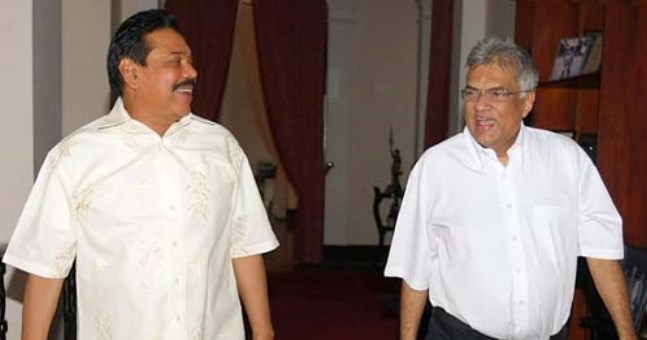 [Who will have the last laugh?]
Uva Beginning of a change?
Wishawamithra 1984

What materialized at the elections held on Saturday, September 20 was the possibility number 3 as reasoned out in my last week’s column: “the Government-backed UPFA would form a Provincial Administration, having gained a marginal victory at the elections.” The United National Party (UNP) came quite close to grabbing the Badulla district but fell short by a mere three per cent (3%). However, the combined opposition scored a slender victory in the district by gaining just above 50% of the total valid votes. It is a remarkable performance aided and abetted by many factors the most prominent being the birth of a potential political superstar- Harin Fernando, who undoubtedly would be an object of envy and a target of vitriol, from both inside and outside the UNP. Harin needs to cope with that kind of internal back-stabbing, petty jealousies and regional mud-slinging. But he must also remember that he should make all efforts not to allow what happened to Dayasiri Jayasekera to happen to him. He was considered a potential future leaders but now has been relegated to the Provinces with his ‘national’ appeal now a thing of the past.

The only way in which Harin Fernando could sustain the image that he gained in the Uva PC elections is by either getting himself injected into the Leadership Council of the UNP or getting some other high level post in the party that would afford him a role of national dimensions. His youth is to his advantage and the charismatic demeanor he displayed right throughout the Uva campaign reminds one of two former leaders in the UNP- Lalith Athulathmudali and Gamini Dissanayake. No person in the present UNP leadership setup has shown such promise and at the end of the day he has proved his worth in no uncertain terms. They say, “Victory has many fathers but defeat is always an orphan”. Harin might well be advised to draw inspiration from such idioms, if not to advance his personal cause, at least to stay above water.

But let us not paralyze ourselves by analyzing the results to an absurd degree. Such deep analysis would only cause many more unanswerable questions to spring up rather than real and practical solutions. In a very broad sense, the vote in the Uva Province showed more disillusion felt by the people with the Government, the UPFA candidates and the general direction in which the country is heading with the steering being handled by the Government and its henchmen. In addition, the President’s so-called invincibility and unquestioned appeal is certainly diminishing. He is no more considered a sure bet, at least by the Badulla voters. For instance, President Mahinda Rajapaksa in Welimada alone had no less than eight (8) pocket meetings, which were also attended and addressed by the local candidates. And the UPFA lost that seat. In the Badulla District, the combined Opposition obtained more than 50.65% as against 44.63% (UPFA+NFF) and when the 4.73% that went to others is allotted, the anti-government vote becomes 55.38% which is sizeable. At the last Presidential Election, the incumbent President Mahinda Rajapaksa received 53.23% as against the combined opposition candidate Sarath Fonseka who got only 44.55%. This year the opposite has occurred. The Badulla District has more than 30% of minority votes of whom Estate Tamils form the majority. In addition, the Muslim minority vote too is close to 5% and it is quite obvious that whenever the minorities play a role, Mahinda Rajapaksa is bound to lose ground.

In the Moneragala District where Sinhalese Buddhists account for more than 90% of voters, the UPFA just managed only 58%. If that is the average percentage of voters from that segment, that the UPFA could muster, then they are in deep trouble, which of course depends on the acceptability of the Presidential candidate from the Opposition.

What is most salient in the whole exercise of the Uva PC election is that the UNP by itself has obtained slightly more than General Sarath Fonseka did as a Common Candidate of the combined Opposition at the 2010 Presidential Election. The dent that has been caused in the UPFA armor is mainly one of a negative nature. People voted ‘against’ the governing coalition rather than ‘for’ the UNP or Opposition. The UNP and other opposition parties must realize that and if they want to be successful in ousting the present incumbent, they need a common front. Presidential Elections are a totally different story altogether. Personalities do matter and unlike in parliamentary elections in which people cast their votes for a particular political party, at Presidential Elections, people weigh their choices on the personality, likes and dislikes, trustworthiness, personal courage and bravery, political acumen and astuteness of the candidate and his or her past history and all these considerations come into play. In such a complex scenario, the UNP and the rest of the Opposition have to find a common platform in the first place and then select the best candidate who could deliver the platform to electoral victory. The Sri Lankan electorate is increasingly polarized and as a result, it is most prudent to see how the majority Sinhalese Buddhists on the one hand and the Tamil/Muslim minorities on the other would cast their votes in the upcoming Presidential Elections.

I have taken these districts which are predominantly Sinhalese-Buddhist in ethnic composition terms. How did Mahinda Rajapaksa fare in these elections? The average vote for Mahinda has dropped by a whopping 10%. If that is a trend instead an outlaying statistic, then the incumbent is in real danger of losing.

In order to come to that conclusion, I have used the following projections:

Allow me to explain:

Total number of votes is assumed as 100 and the ratio between the majority Sinhalese Buddhists and non-Sinhalese Buddhists is projected as 65:35. Of the 35 minority votes, with more weight age than realistic, given to Mahinda Rajapaksa and then on a basis of 30% for Mahinda and 70% against Mahinda, he will have 11 votes of the total 100. He needs another 39 votes from the 65 representing the majority vote. What percentage is that? The answer is 60%. That is a very formidable task bordering on impossible. Because in the event the minority block falls into a 20:80 slot, Mahinda would get only 7 votes leaving him needing 43 of the balance 65 votes. This makes it 66% which is even more difficult.

Now you’ll see how the battle-lines are drawn. The once-unbeatable Mahinda Rajapaksa has become vulnerable given the mood of the country as shown in the Uva PC elections. The UNP is really in the driving seat. What caused the electorate to change its stance?
The reasons could be summarised thus:

Ranil Wickremesinghe has done what he should have done three years ago: Make Sajith Premadasa the Deputy Leader of the party and secure his 100% participation at elections. The Party today looks more united than at any other time since Ranil took over the reins.
Harin Fernando’s magnetic personality (young blood)
Increasing economic hardships
Shedding of the fear psychosis

Now the corporate world will think twice before refusing financial aid to the UNP. Senior ministers who are rotting away in government benches might rethink their and their off-springs’ political future. But the UNP and its leadership cannot afford to rest on their laurels. They must unleash their forces through the length and breadth of the country.

Take a lesson from the person who mastered this art, J R Jayewardene. At last there seems to be light at the end of the proverbial tunnel. The Rajapaksa myth is brittle and beginning to crack.
Courtesy Daily Mirror