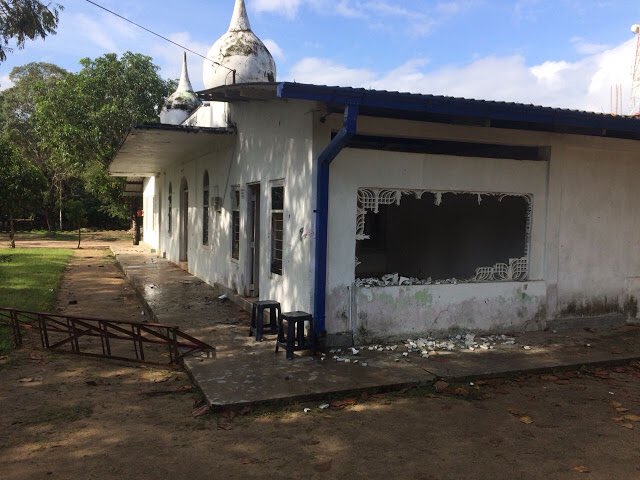 The anti-Muslim hate campaign which surfaced from around 2012 seems to be continuing unabated, erupting in different parts of the country at regular intervals.

Taking advantage of the democratic space created by the change in administration after January 2015, these hatemongers have manifested themselves in various new avatars such as Sinha Le, Mahason Balakaya and other motley groups spreading their evil message and creating insecurity among the Sinhalese community through a deadly cocktail of untruths, deception and deliberate misinterpretation.

Unfortunately, the Government for its part seems content on loosening the controls on free speech and democracy without taking adequate steps to prevent abuse of such freedoms. Hence the mischief makers are having a field day feeding the innocent public with baseless allegations designed to cause alarm among them and hatred against the minorities. This is true not only in the field of inter-communal relations but even in the political field where the Government’s unwillingness to communicate its achievements to the people as well as to counter-criticisms proved disastrous at the local council elections.

Last week’s incidents in Ampara where Muslim shops and a Muslim place of worship were attacked are worth examining to identify where things are going wrong. It begins with a drunken youth walking into an eatery called Cassim Hotel and ordering a rice-and-curry meal with meat curry. Upon being advised that the meat curry was over, he insisted that he be served with the meat that he so strongly desired.

This was followed by verbal and physical assaults on the cashier and the allegation that a fertility pill had been placed in the food. Almost on cue, a large mob had descended on the shop and thereafter went on an attacking spree where the eating house, other Muslim-owned shops in the vicinity and the mosque were damaged.

At first glance, the attack seems pre-planned and the argument in the hotel was only a pretext for the mob in waiting to move into action. How else can one explain such a crowd moving into action in the early hours of the morning when most people in rural Sri Lanka were in bed?

What is more disturbing is the action (inaction) of the Police when the riot erupted. There are allegations that despite the Police station being located in close proximity to the scene of the incident, the Police delayed in arriving. Apparently the Police were unable to quell the riot and reinforcements had to be rushed in from nearby Police stations and thereafter the STF too had to be summoned before some semblance of order could be brought about.

All this suggests that the rioters were engaged in their unlawful acts for a considerable period of time. In such a situation it is rather surprising that the Police were only able to arrest five suspects to produce in court. Contrast this with the action of the Tambuttegama Police who were able to arrest 59 suspects at the scene of the riot.

All these are disturbing reports and it is important that an independent investigation is conducted to ascertain the truth or otherwise of all these allegations.

This becomes all the more important because this incident has coincided with the United Nations Human Rights Council deliberations as well as the report released by Amnesty International which has highlighted the continuing attacks on Christians and Muslims. These attacks only serve to draw unfavourable attention on Sri Lanka, with the Organisation of Islamic Countries (OIC) condemning the incidents and international news agencies too carrying negative reports of the incidents.

What is most baffling is that in a country like Sri Lanka which boasts of being a mature democracy having a highly literate and educated citizenry, the public can be railroaded into the most irrational course of action on the strength of stories that may fit into a collection of Grimm’s fairy tales. Medical experts have repeatedly confirmed that there are no pills available anywhere that make people barren but these falsehoods continue to be spread through social media which can cause panic amidst innocent and not so discerning members of the public.

In the interest of preserving national harmony and dispelling untruths the State authorities and medical organisations like the Government Medical Officers Association (GMOA) and the Sri Lanka Medical Association (SLMA) should publicly state the correct position on the so-called sterility pills without any further delay.

What is even more surprising is that politicians who hold news conferences at the drop of a hat on even insignificant matters if they stand to gain politically are maintaining a loud silence on the Ampara incidents. Strong condemnations on these incidents will serve the national interest better than some of the topics they wax eloquent on at these news conferences.

Another unhappy feature of the current troubled times is the role of the media which can play a constructive role to clarify matters propagated by the mischief mongers. Investigative articles can highlight the truth about these so-called fertility pills, the miscreants who are orchestrating these attacks against the Muslims and other related matters. They can also compel politicians to speak out on these ugly incidents by questioning them at public events when they are seeking to get ‘voice cuts’ for broadcast.

The Government for its part needs to take tangible steps to remove the germs of racial and religious hate from society and create an enabling environment for national unity and communal harmony, for which Sri Lanka was a proud practitioner in the not too distant past.

Taking action against lawbreakers after the event is only damage control at best and will not cure the disease of hate speech and the spreading of communal disharmony.