Amid Violence, Returning to Elections in Sri Lanka After a Void 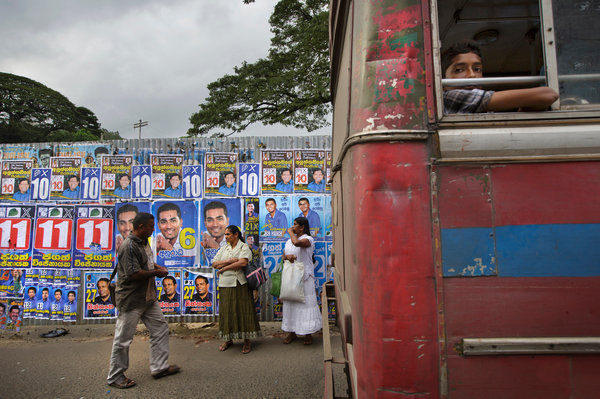 JAFFNA, Sri Lanka — The thugs first appeared around 11:20 on Thursday night, a dozen or so men lurking outside her house. Two wore army uniforms.
More than a hundred men, most wearing army uniforms, on Thursday attacked the home of Ananthi Sasitharan, above, a Tamil candidate, according to the accounts of several witnesses.
Ananthi Sasitharan — a Tamil candidate in the first provincial elections to be held in 25 years in the former insurgent stronghold here — said she had woken up her three daughters and prepared for the worst. She called a few friends, who soon appeared and persuaded her and her daughters to sneak out the back. It was a good thing they left.
Ten of her supporters stayed behind to watch the house. A few started playing a Sri Lankan card game called Monkeys and Donkeys, but before they could finish even a few hands, four trucks pulled up outside and disgorged more than 100 men. Most of them were wearing army uniforms and carrying guns and wooden clubs, according to the accounts of several witnesses.
“Where’s Ananthi?” the thugs started shouting. “Where’s Ananthi?”
And then they attacked.
Four years after Sri Lanka’s long civil war came to a bloody end, the first provincial council elections since 1988 are being held Saturday in the country’s Tamil-dominated north amid sporadic reports of violence and intimidation. There are many Tamil parties vying for seats under the flag of the Tamil National Alliance, competing with candidates from the governing coalition, the United People’s Freedom Alliance, which controls more than two-thirds of the national Parliament.
The council is fairly toothless, because President Mahinda Rajapaksa of Sri Lanka has centralized much of the government’s powers in his and his family’s hands. But the election has become an important symbol to the Tamil people as well as to international monitors about whether the Rajapaksas are willing to countenance even cosmetic steps toward reconciliation with the Tamils.
“The military has been visiting houses all over the area and telling people not to vote for the Tamil National Alliance,” Mavai S. Senathirajah, deputy leader of the Tamil alliance, said in an interview. “We will not be intimidated.”
The war’s end has been beneficial to Sri Lanka, an island of about 20 million people split between the dominant Singhalese and the minority Tamil. Roads have been rebuilt, tourists have returned to its crystalline beaches and tea estates, and the pervading sense of unease that gripped the country for decades has largely evaporated. New train tracks have nearly reached Jaffna, at the northern tip of the island.
Yet, signs of the violent past remain. Destroyed houses, burned-out churches and the broken carcass of a water tower still litter the landscape in once war-torn areas. There is growing evidence that in the course of war the Sri Lankan government may have killed as many as 40,000 people — many of them innocent civilians — particularly at the close of the war. The United Nations Human Rights Council has voted repeatedly to condemn the government’s failure to investigate potential war crimes even as a string of shocking videos that appear to show the murders of innocents leaks out of the country.
The Rajapaksa government, meanwhile, has undermined the independence of both the judiciary and the news media. Navi Pillay, the United Nations high commissioner for human rights, accused the government last month of “heading in an increasingly authoritarian direction.” On Friday, Ms. Pillay accused the Sri Lankan government of waging a disinformation campaign against her.
For the Rajapaksa government, the international criticism is worrisome. The Sri Lankan economy depends on tourism and foreign investment, and in November the country will host a summit meeting of Commonwealth leaders, a diplomatic coup. Many of the top hotels in the capital, Colombo, are undergoing renovations to ready themselves for the delegations.
An election in the northern province that is judged as free and fair could help improve the country’s international reputation. But it is far from clear that election monitors will bless the effort.