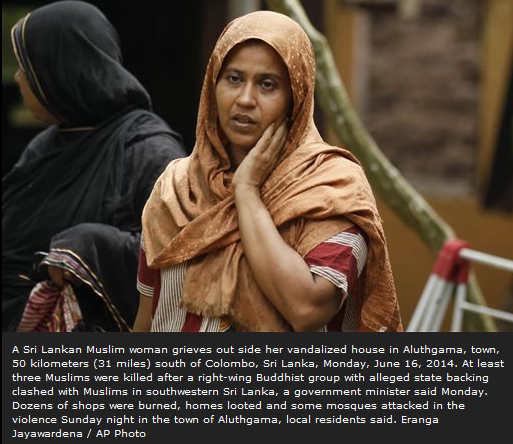 IGP received letter from Azath Salley warning of violence; Two drunken monks among 47 arrested
The government’s failure to adopt pre-emptive security measures at Alutgama and Beruwala should be thoroughly investigated, General Secretary of the Communist Party of Sri Lanka and Senior Minister Dew Gunasekera said yesterday. Expressing shock and anger over the government’s inaction, the senior minister stressed the need to establish the circumstances leading to Sunday’s mayhem. Violence claimed the lives of two Muslims and caused injuries to over 80 persons, vast majority of them residents of Alutgama and Beruwela. The police said that the deceased had many cut injuries, though there were no gunshot wounds.
Clashes left seven policemen including an STF sergeant injured. The police commando suffered gunshot injuries.
The police lifted the curfew imposed on Alutgama and Beruwala at 8 a.m. yesterday. It would be re-imposed depending on the situation, they said. A senior police officer said of 47 persons arrested for violating curfew as well as involvement in violence 30 had been remanded pending inquiries, 15 given police bail and two detained for questioning.
Among the arrested were two armed Buddhist monks, the police said. Both had been under the influence of liquor at the time of their arrest on Tuesday night, the police confirmed.
Senior Minister Gunasekera said the actions of some of the extremist elements were essentially terrorist in nature. Referring to a group of activists from Bodu Bala Sena (BBS) storming the Trade and Commerce Ministry in late April this year, Minister Gunasekera said that he couldn’t understand why the government had remained silent.
The BBS was even looking for Jathika Bala Sena Secretary, UPFA Mahiyangana Pradeshiya Sabha member, Ven. Watareka Vijitha Thera who, it claimed was hiding in that ministry.
Minister Gunasekera claimed that those supportive of Sri Lanka had come under intense pressure at the last sessions of the Geneva-based United Nations Human Rights Council (UNHRC) to abandon Sri Lanka due to violence perpetrated by extremist elements. The ongoing terror campaign had caused an irreparable setback to post-war national reconciliation efforts and brought the government into disrepute, the minister said.
National Unity Alliance (NUA) leader and UNP Central Provincial Councilor Azath S. Salley yesterday told The Island that Alutgama violence could have been prevented if the police had heeded his plea to prevent a gathering of extremists at Alutgama last Sunday. Unfortunately, the police obviously acting at the behest of the government allowed the gathering leading to unprovoked attacks on the Muslim community. Responding to a query, Salley said that having warned Senior DIG Anura Senanayake in charge of the Western Province to prevent the gathering, the situation was brought to the notice of IGP N. K. Illangakoon on Sunday. Asked whether he identified those planning to gather in Alutgama, Salley released a copy of his letter addressed to the IGP in which he accused the BBS as well as Sihala Ravaya of planning to go on the rampage. Salley warned the IGP that the gathering in Alutgama was nothing but a planned attempt to cause mayhem.
Police headquarters acknowledged the IGP had received a letter from Salley warning of an impending attack.
Authoritative security sources told The Island that there had been several other incidents outside Alutgama and Beruwela during the past 24 hours ending 6.00 am yesterday. Action had been taken to thwart several attempts to incite Sinhalese and Muslims to violence, a police officer said, adding that the police and the armed forces remained on a heightened state of alert to meet any eventuality. Among those incidents were throwing petrol bombs and distribution of inflammatory leaflets in Horana, damaging a Buddha statue in Kotiyakumbura and an arson attack on a shop belonging to a Sinhalese at Darga town by another group of Sinhalese. Sources said that a group persons had thrown burning tyres into a mosque and a house in Horana. The police detained four Muslim youth trying to set some tyres ablaze at Pallimunai. Stones were also thrown at two SLTB buses at Saindamarudhu in the Ampara District, damaging them. The police seized petrol bombs and knives from a Buddhist temple and a Muslim shop in Darga town.