Allow Sri Lankan people to solve their problems on their own, Prez Sirisena tells UN 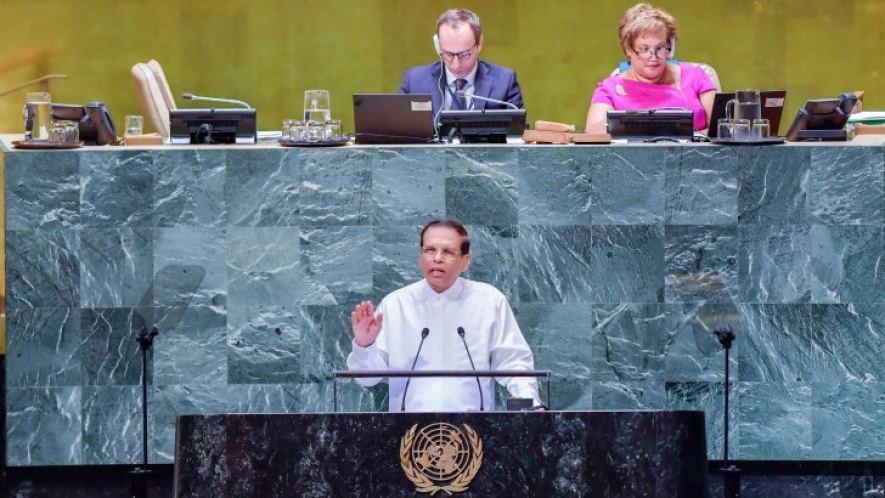 (26 Sep 2018)President Maithripala Sirisena called upon the international community to look at Sri Lanka with a fresh perspective and consider the tremendous progress made by the government towards reconciliation, restoration of democratic freedoms, human rights and the rule of law and extend the fullest support to the build a progressive, democratic, free and equal society.

Addressing the 73rd Session of the United nations General Assembly in New York on September 25 (26th morning in SL time), he said Sri Lanka is taking action to consolidate peace and forge ahead to develop the economy, and such a nation deserves the support and understanding of the international community. “I urge the international community to allow Sri Lankan people to solve their problems on their own,” he said.

As an independent country we do not want any foreign power to exert influence on us. We want to appeal to the international community to give us the room to resolve the problems that we are facing so that the right of the Sri Lankan people to find solutions to their problems is respected, he said.

The President  said that the government is working to eliminate fear and suspicion among different communities.Quoting from the Buddha’s preaching in the Sallasutta of Samyuktha Nikaye in Thripitaka, he said if a man is pierced with a dart, he will suffer physical pain. When he worries about it, he suffers more pain. Hence, there are two kinds of pains suffered by the man. When it comes to Sri Lanka, it is the people who suffered pain due to war and they continue to feel pain when they think about it. Therefore, I take this opportunity to call upon your support and cooperation, he said.

The President pointed out that the exodus of refugees is a major issue in international politics and urged the United Nations to play a bigger role because of the paramount importance of the issue.Sri Lanka is following a nonaligned policy. In fact, Sri Lanka hosted the Non-aligned Summit in 1976 and it was the most successful summit. Sri Lanka has a policy of friendship with all and the country does not have any enemy nation in the world, he said.

President Sirisena said that Sri Lanka’s Executive President had been vested with more powers than any other leader in the world, and he had curtailed those excessive powers of the Executive Presidency and transferred those powers to the Parliament.President Sirisena emphasized the need to eradicate poverty. At present, the whole world is engaged in an attempt to free itself from poverty and he said the United Nations must play a bigger role in the endeavour.

“I must mention that, today, the whole world is facing challenges posed by severe changes in climate. I would like to propose that the community of nations must focus on implementing the Paris Accord that the world reached in 2015, by further improving the unity that we reached by signing that accord. We must remember that the Paris Accord is critically important to the future of the entire biosphere and humanity,” he said.

The President categorically stated that the government is committed to work tirelessly to achieving reconciliation by fostering understanding among all ethnic and linguistic groups, while eliminating mutual suspicion and hatred in order to create a society where all can live freely and harmoniously. “Further, we are dedicated to ensure that the country will accomplish economic prosperity. Specially, my government is committed to the creating a fair and just society by strengthening the rule of law”, he said.

He said that during the last three and a half years, the government has taken several important steps that are necessary to consolidate democracy, freedom, good governance, media freedom and independence of the judiciary. “Through such transformative steps, we have laid the foundation necessary to forge national reconciliation, communal harmony and ensure non-recurrence of conflict in our country,” he said.

President Sirisena pointed out that the most ruthless terrorists were defeated by the armed forces and the nation honour the valiant soldiers who made many sacrifices to bring peace to the country and safeguarded then unity and sovereignty of th nation with utmost commitment.

He emphasized that the vision of the government is to ensure sustained economic development through the increase of domestic agriculture and industry under an environment friendly policies and programs. He emphasized the imperative need to adhere to the Paris Protocol on Climate Change for the sake of the future of the human beings as well as flora and fauna.

“Sir Lanka has always been a country that has respected its treaties and conventions, agreements and rules and regulations of the United Nations. As such, in our country’s journey where we protect our independence and sovereignty, we respectfully request the support of the international community for us to go on a moderate but steady path to achieve our targets in order to find sustainable solutions to the allegations leveled against us,” the President said.

President Sirisena called on the world leaders to take a collective action for eradication of narcotic drugs and illegal pharmaceuticals. He said he wanted to draw the attention of the respected General Assembly of the United Nations to the problem of drugs that poses a serious threat to human society and asked the world body to play a bigger role in eliminating drugs.

The President said that in the international politics, the issue of Palestine is very important and reiterated Sri Lanka’s support to the people of Palestine.