All 3 election commissioners have agreed that the dissolution of Sri Lanka parliament is illegal. 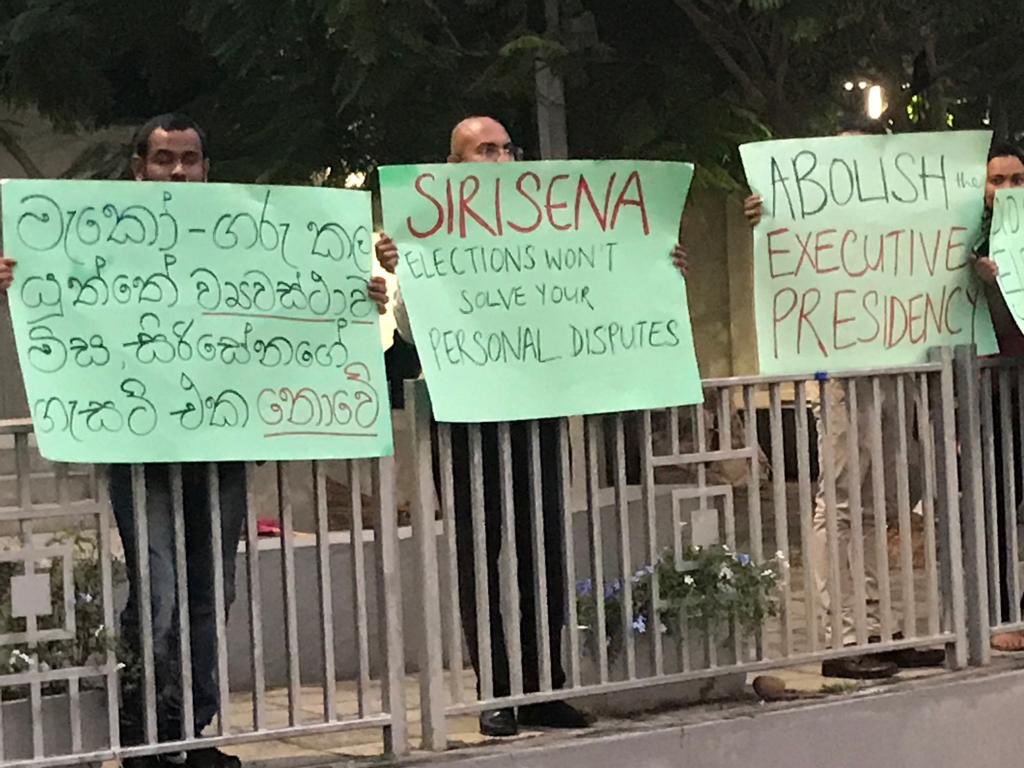 Image: Protests are on going in Colombo against the Sirisna’s move.

In a Right of Reply sent by commissioner S. Ratnajeevan H. Hoole (on Election Commission request) to “Colombo Telegraph”
says that “All three of us agreed that the dissolution of Parliament was unlawful. Where we disagreed was whether elections had to be conducted on 5 January 2019 as in the gazette proclamation dissolving Parliament.”

The letter also says that ” Commissions unanimous opinion that when papers on the ongoing cases are served, we would not oppose the granting of any relief prayed for in those petitions has being recorded.”

Two of your recent stories bear inaccuracies and require corrections:

This is incorrect. After the Commission meeting on 10 Nov. the Commission on a vote of 2 to 1 with the full quorum of 3 decided to ask the Commissioner General of Elections Mr. M. A. P.C. Perera to make preliminary arrangements to hold the elections. You have the copy of the instrument delegating that authority.

Is this an attempt to cause grief within the Commission? The article incorrectly states that Mr. Mahinda Deshapriya is putting pressure on both the other two members to resign and is trying “to emasculate the commission and revert to the old system. [It] has given rise to the strong speculation that he was operating in sync with Sirisena’s unconstitutional agenda.”

All three of us agreed that the dissolution of Parliament was unlawful. Where we disagreed was whether elections had to be conducted on 5 January 2019 as in the gazette proclamation dissolving Parliament. I was clear that we cannot follow an illegal order while my two colleagues felt that the conduct of the election ordered by gazette is a must.

Mr. Abeysekera wanted to resign even at the beginning of the 11th of Nov. meeting of the Election Commission saying the dissolution was illegal. Had he resigned, it would have led to chaos as the Commission needs a quorum of three on a membership of three to operate. Further, on that resignation, the Constitutional Council would need to recommend a replacement to the President which process would take a minimum of 2 weeks and probably a lot more. Worse, after his resignation, for day to day operations with Mr. Deshapriya and I being on somewhat different pages on conducting elections, it would have led to crisis after crisis. Envisaging the immediate resignation of Mr. Abeysekere, Mahinda Deshapriya therefore drafted the letter delegating the authority to Mr. Perera. (He is the Commissioner General of Elections. The Commission is like a Board while the Commissioner General executes the directives of the commission). This would remove an immediate problem but worse would follow as Mr. Perera planned to retire on 26 Nov.. In that case Mr. Deshapriya and I would lack a quorum to recommend the next Commissioner General to the Constitutional Council.

As such Mr. Deshapriya in delegating the authority, of whatever value it is, to Mr. Perera, was only making a temporary band-aid to avoid a calamity for the nation. He was not “ducking” any responsibility. Even this arrangement is challengeable since the Commission has to supervise says the constitution, the exercise of that delegated authority. How is that done y a Commission of two?

Mr. Abeysekere’s claim that he cannot in conscience conduct an unlawful election raised new problems. If it is unconscionable for him, can it be within the conscience of Mr. Perera to do what Mr. Abseysekere finds unconscionable while he gives that job to Mr. Perera? More importantly, can Mr. Deshapriya and I, the two remaining members of the Commission, do what is unconscionable for Mr. Abseysekere? Later the same afternoon Mr. Deshapriya and I discussed if we should both resign with Mr. Abeysekere and agreed to discuss it further. On the 11th evening I told Mr. Deshapriya that I would not resign but go for a fundamental rights plaint against the proclamation.

We, Mr. Deshapriya and I, knew that once Mr. Abeysekere resigns the Commission just could not go on. Contrary to your piece, many including Mr. Deshapriya worked on Mr. Abeysekere to rethink his resignation. Mr. Deshapriya therefore far from pressuring either of us to resign, constructively worked on persuading Mr. Abeysekere not to resign at least for a few days so that we could make stop-gap arrangements for the country to move on while having a quorum of three. One example was our decision to hire a lawyer from the private bar to represent us in the ongoing cases because the Attorney General is duty bound to represent the President whose views we do not share.

Finally, at the meeting today, 12 Nov., Nalin Abeysekere said he will not resign. I am glad for the Commission and the Nation. Nalin Abeysekere was indeed the first person to want to resign and deserves the credit for it.

Some may say that Mr. Deshapriya shows signs of being the Commissioner of Elections that he was rather than Chairman of the Commission that he is. If there is any truth to it, it is by old habits formed as Commissioner and by people sucking up and asking him to do things as if he is the Commissioner, Head of Commission etc. rather than the Chairman he is. However, at heart he is an out-and-out liberal, giving us full freedom. For example, after I filed my FR Petition against the proclamation and it was claimed at the Commission meeting today (12 Nov.) that I should resign for having done that, Mr. Deshapriya asserted that I have the freedom to do what I did.

He also had recorded our unanimous opinion that when papers on the ongoing cases are served, we would not oppose the granting of any relief prayed for in those petitions.

As grownups we may have different opinions, but at the end of the day we function as a team.