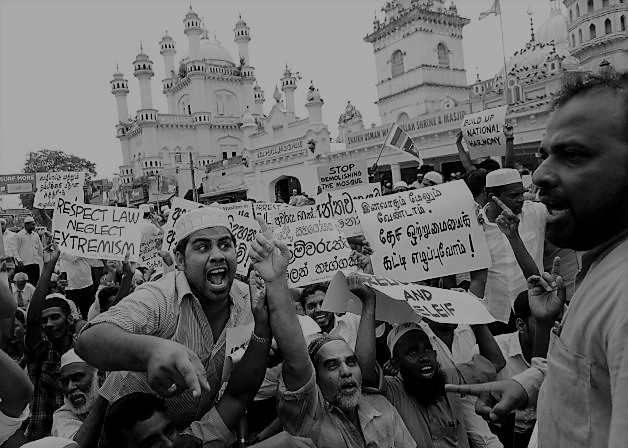 Image: a Muslim protest in Colombo.

The Eastern Province based Muslim identitarian politics, brought to the fore by M. H. M. Ashraff, founder/leader of the Sri Lanka Muslim Congress (SLMC), has entered a new phase with the alliance between the former General Secretary of SLMC, Hasen Ali and Minister and Leader of the All Ceylon Makkal Congress (ACMC) Rishad Bathiudeen.

Currently SLMC is the dominant force in Eastern (Ampara) based Muslim politics along with United People’s Freedom Alliance’s (UPFA) A. L. M. Athaullah. SLMC has hitherto been acknowledged as the undisputed representative of eastern Muslims. However, the current SLMC leader, Rauff Hakeem, hailing from Kandy (Kandiyaan), is rapidly losing support among the Muslims of Ampara (Mattayan).

Athaullah who has considerable power in Akkaraipattu, does not tolerate opposition to his authority and he is attempting to ensure that his son is his successor. He has also joined President Maithripala Sirisena. M. L. A. M. Hizbullah, leader of the Kattankudi Muslims is also supporting the President and President Sirisena has appointed over 10 Muslims organizers to Ampara.

However, during the 2015 General Election, Bathiudeen, ‘invaded’ Ampara and his ACMC obtained 33, 000 votes (10%), 18% votes in Kalmunai, 27% from Samanthurai and 10% from Pottuvil. Although they did not obtain a seat in Parliament, ACMC indicated they also have a considerable presence in Ampara. With the alliance with Ali, these numbers are sure to swell.

Ali on the other hand is perceived as a gentleman politician, in both Colombo and the East. Although he has always entered Parliament through the national list, we all saw his abilities as an organizer during the 2015 Presidential Election.

In August 2015, many expected that the two national lists seats obtained by the SLMC would go to then Chairman of the SLMC, Basheer Segu Dawood and Secretary, Ali. However the SLMC leader appointed M.H.M. Salman and his brother A.R.A. Hafeez (who resigned in 2016 and M.S. Thawfeeq was appointed to the position).

Dawood and Ali, following Udaya Gammanpila, formulated a Pivithuru SLMC. This later morphed into United Peace Alliance. Mansoor A. Cader was appointed General Secretary of Sri Lanka Muslim Congress (SLMC) in place of Ali. Hakeem promised, before God, that he will remove Salman from the national list slot and give the position to Ali. However since this did not materialize, Ali formed United People’s Alliance (UPA) with Bathiudeen.

Muslim politics in the North

Bathiudeen has managed to assume full control of the Northern Province, using the United National Party (UNP) as his cat’s paw.

It is now obvious that 90% of the candidates contesting for the coming Local Government (LG) elections from the UNP led alliance will be Bathiudeen’s acolytes.

Bathiudeen will now contest the Eastern Province separately and the SLMC has no other option but to join the UNP. Since the UNP does not have strong candidates in the east, the SLMC will have a significant bargaining power. The UNP list for the Northern Province will be created by Bathiudeen and contesting with the UNP is beneficial for him because the UNP can attract some Tamil votes in the North, a feat beyond Bathiudeen.

Bathiudeen will also have a significant say in selecting UNP’s Sinhala and Tamil candidates in the North as well and anyone who wants nominations from the UNP must become a supporter of Bathiudeen. Or they must join the TNA, which is what has already happened in Thunukkai and Manthei. Bathiudeen is also responsible for selecting candidates for the seat for the Sinhalese in Vavuniya and thus the Sinhalese candidates who were to contest from the UNP are now planning to contest independently.

Kalmunai MC is the bastion of Muslim politics and it comprises of Kalmunai Tamil, Kalmunai Muslim, Karativu and Saindamaradu.

As Saindamaradu Pradeshiya Sabha has not been established, Chairman of the Jumma Mosque Y.M. Hanifa is to lead an independent group. Votes in Kalmunai are divided between SLMC, Ali – Bathiudeen alliance, SLFP and SLPP and will become further complicated by the Saindamaradu factor. This will also ensure that the number of votes SLMC gets will go below 50% for the first time.

Ampara has always had powerful Muslim politicians who held positions in the Chandrika – Mahinda administrations and they have artificially created local government bodies in the East. This has lead to anomalies. For example, one can walk from Karativu Divisional Secretariat office to Saindamaradu Divisional Secretariat office. And if a separate local council is established for Saindamaradu, the Tamils who live there will not be represented.There is also an idea that Muslims should only vote for a person named by the mosque in Maliyakkadu, which belongs to Karativu.

The Hasen Ali – Rishad Bathiudeen alliance will clearly change the political dynamic in Ampara. However it is not still clear how it will affect Muslim politics at National level.