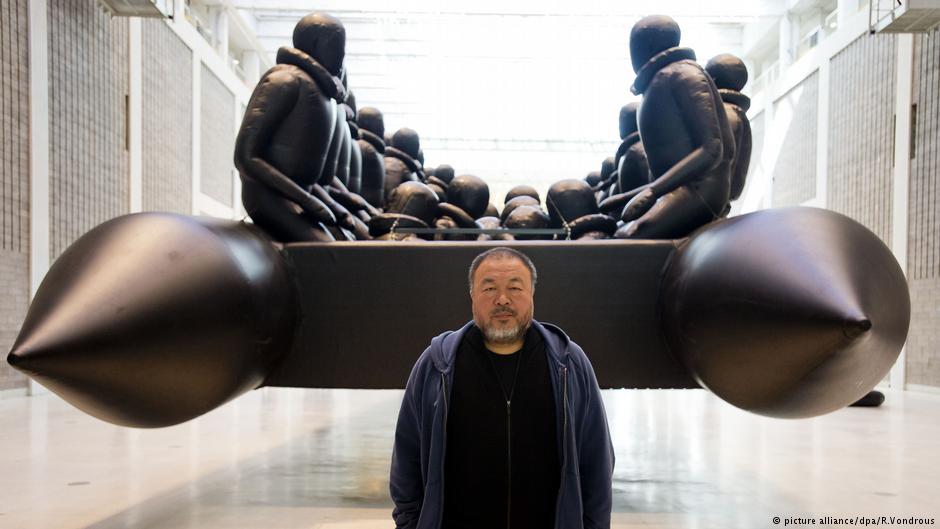 The new DW documentary accompanies artist Ai Weiwei during work on his own film. It depicts his life between Beijing, New York and Berlin, and is a very personal look at China’s most famous artist living in the West.

The DW documentary “Ai Weiwei Drifting” initially aimed to showcase Chinese artist Ai Weiwei’s work at Berlin’s University of the Arts, but it ended up focusing on much more. It shows China’s most famous artist in the western world as a filmmaker, architect, concept artist and sculptor, but also as a father.

Drawing on his experiences as a displaced person, and in light of the refugee catastrophe that has also overcome Europe, he himself created his own film entitled “Human Flow,” which is currently in post-production. That movie, which employed film teams in 25 different countries, including Afghanistan, Palestine and Mexico, shows the tragedy of people who flee their native countries, only to drown by the thousands in the Mediterranean Sea.

DW filmmakers Eva Mehl and Bettina Kolb followed Ai Weiwei on that journey for 15 months to produce their 56-minute documentary. It offers a glimpse into the artist’s work at the Greek-Macedonian border in December 2015, for instance, when he interviewed, filmed and photographed refugees at a camp near the village of Idomeni.

An oppressive feeling can overcome viewers while they watch Ai take pictures with his cell phone of the refugees walking through the mud in their flip-flops or in their improvised tents, or when he looks through his camera to find the right angle on those he wants to interview.

Does art have no boundaries? This question has accompanied the artist in all of his work. His fans see him as an agitator who masterfully pours salt on the wound with his work – such as when he drew attention to the serious deficits in the Chinese construction industry with his installation of 9,000 school backpacks representing thousands of pupils who died during the 2008 Sichuan earthquake. The artist pointed to the poor construction of the schools that were not able to withstand such a high-magnitude quake.

His critics, on the other hand, view him a media-hungry personality who manipulates via his supposed political statements.

Those critical voices grew louder when he re-enacted the 2015 photo of the young Syrian boy Alan Kurdi, whose corpse washed ashore on the Turkish coast. In “Ai Weiwei Drifting,” he takes a clear stance on the outrage unleashed on him, saying that no one is in the position to tell him why that was immoral.

He finds it absurd that people would get upset about his depiction, but not about the children who die on a daily basis in Aleppo. The answer to the question about art’s boundaries thus becomes apparent: “As long as artists are human beings, they must grapple with human crises,” he says.

In addition to the film shots looking at his work about migration and the act of fleeing, Mehl and Kolb also accompanied the artist to visit the stations of his life in Beijing, New York and Berlin. He discusses his famous poet father Ai Qing, who was persecuted during Mao’s cultural revolution.

For the first time, the film reveals moments from his personal life: cooking in his Berlin kitchen, or watching television with his son. It shows a Beijing visit to see his mother, who is the only person in the film to talk about Ai. The filmmakers were able to capture these moments in an authentic way, such as when he admits that his son has a stronger relationship to his mother than to him. His son says he is strict and meddles into things that are not his business. “Weiwei was an enigma to me,” said filmmaker Bettina Kolb. “I never knew what was going on in his head, but one thing was clear: His thinking is super-fast.”

Filmmaker Eva Mehl, on the other hand, was impressed by the way Ai approaches people. “He just sat down with them to spend a little time with them,” she said.

The film “Ai Weiwei Drifting” uses impressive film images to present a very personal profile of one of the world’s currently most famous artists, who says about himself: “I do not have a home country. My native country is the internet.”

“Ai Weiwei Drifting” is a 56-minute documentary film by Deutsche Welle, produced by Eva Mehl and Bettina Kolb. It premiered in Berlin on June 13 and will run on DW’s television program starting on June 24,  2017. Together with the documentary, an online special will present the life of this exceptional artist whose childhood was dominated by flight and exile.