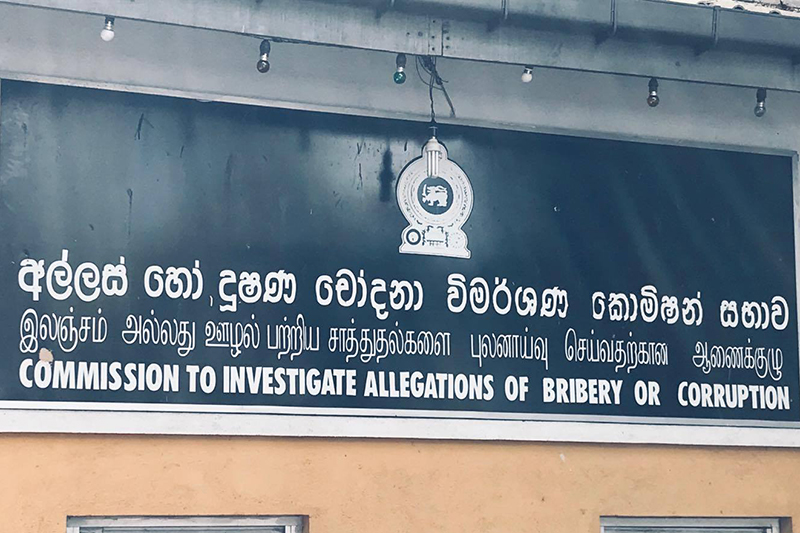 Ahisma Wickrematunge has filed a complaint against Senior Superintendent of Police W.Thilakaratna for attempting to aid Udayanga Weerathunga to escape arrest, at the Commission to Investigate Allegations of Bribery and Corruption (CIABOC). The complaint has been filed on 21 Feb 2020.

In her complaint, she says that 0n 07 February 2018 acting under case number B 639/2015 Hon. Magistrate Lanka Jayarathana issue a warrant of arrest for former Sri Lankan Ambassador to Ukraine Mr. Udayangana Weerathunga (NIC:640820900V) in terms of section 63 of the Code of criminal procedure Act.

Ahisma Wickrematunge says that she has followed the alleged crimes of Mr Weerathunga that were investigated by Mr Francis for over ten years, as they were formed the basis for civil litigation bought against her father, who himself had investigated these matters in his capacity as Editor-in-Chief of Sunday Leader, and she is very familiar with the facts of the case and bulk of evidence available against Mr.Weerathunga.

On around 21 January 2020 the present director of the CID SSP W. Thilakaratan was notified by The Directorate of General for the Federal Criminal Police of the United Arab Emirates (UAE) that the Federal Supreme Court of the UAE had ruled to allow the extradition of Mr Weerathunga to Sri Lanka, in terms of the lawful extradition request submitted by the GoSL from the warrant issued by Colombo Fort Magistrate Court.

Instead of responding to the request by the UAE’s federal Criminal Police for the make arrangements for the repatriation of Mr.Weerathunga CID director Tilakaratna instead appraised himself of the evidence that had been gathered against Mr.Weerathunga by the Chief Inspector Francis’s investigation, and thereafter retaliated against Mr Francis by requesting e be punitively transferred out of CID, a request that was granted by 29 January 2020. The CID thereafter made no attempt to respond o the UAE government regarding the repatriation of Mr.Weerathunga to Sri Lanka.

On or about 10 February 2020, Mr. Tilakaratna was informed by a very senior official of the Defense Ministry that Mr. Weerathunga was in the incarnation and facing grave physical hardship. He was instructed to bring him immediately to Sri Lanka and make sure he was enlarged on bail without being placed in remand.

At no time Mr Tilakaratna informed the Attorney General’s Department that the suspect Mr.Weerathunga had been returned to the country or they were to produce him before Hon. Magistrate Ranga Dissanayake. When Mr. Weerathunga was produced before Hon. Ranga Dissanayake he voluntarily elected not to have an attorney at law to represent him and make a bail application, which was a significant indication that he verily that he would be enlarged on bail without needing to make such an application.

When the suspect was produced on the evening of 14 February 2020, Mr. Tilakaratna told Hon. Ranga Dissanayake that the CID would not be objecting to the bail for the suspect, as officers need more time to conduct investigations in order to determine whether he was guilty of any wrongdoing. Neither Mr.Tilakaratna neither any other CID officers present, filed with the Magistrate the certificate described by the 8(1) of the Offences Against Public property Act to the effect that the monetary value of the public property allegedly cheated by Mr Weerathunga was in the excess of Rs.25,000. This is notwithstanding the fact that police have previously and repeatedly noted in reports filed before the Colombo Magistrate Court under the case B639/2015 that the sum misappropriated was in excess of US $6.9 million.

Despite Mr Tilakaratna seeking to discharge the suspect<Hon, Ranga Dissanayake on his own volition ordered that the suspect be remanded until 17 February 2020. ..

On 17 Feb, when the suspect was produced in public before the Colombo Fort Magistrate Court, CID officers again failed to produce the certificate under the Public Property Act.

Hon. Ranga Dissanayake highlighted that the CID seems to be behaving in a manner partial to the suspect and not to the justice, and publicly chastised the CID and its Director.

I followed the alleged crimes of Mr. Weerathunga that were investigated by Mr. Francis for over ten years, as they were formed the basis for civil litigation bought against my father, who himself had investigated these matters in his capacity as Editor-in-Chief of Sunday Leader, and I am very familiar with the facts of the case and bulk of evidence available against Mr.Weerathunga.

Therefore I firmly believe that were  CIABOC to peruse the case records of B 639/2015, call for records from the CID pertaining to the extradition of Mr.Weerathunga and the transfer of Mr. Francis, and interview individuals familiar with the facts such as Hon. Ranga Dissanayake, DSG Tusith Mudalige, and CI Nihal Francis, sufficient evidence would emerge to charge, and convict CID officers including Mr. Udayanga Weerathunga of:

The body of evidence discovered should thus be more than adequate to seek the conviction of the relevant police officers for the offence of corruption in terms of section of the Bribery Act. I strongly urge CIABOC to open an investigation into this matter in the public interest.

As the daughter of the late Mr Lasantha Wickremathunge, it is also my responsibility state it is incumbent on CIABOC to take whatever steps necessary in terms of the Assistance to Protection of Victims and Witnesses Act (APVCWA) to shield those potential witnesses to these offences. who have risked themselves in pursuit of justice and may face professional or physical retaliation for their efforts. These persons include xxxxxx.

This plea is consistent with my previous pleading in a civil matter in another jurisdiction that I firmly believe that my father’s murder stems from his efforts to investigate the crimes which Mr Weerathunga is charged. The CID has revealed, since 2015, that at least three additional people were killed in an attempt to cover up my father’s murder.

The MIG corruption scandal has already claimed too many lives. I believe that those responsible must be brought to justice and the matter must be laid to rest, once and for all. An immediate, thorough and impartial investigation by CIABOC may be the only way to prevent the present CID leadership from releasing Mr Weerathunga and his co-conspirators of responsibility for their crimes.