After the smoke clears, what will be left of media in Myanmar? 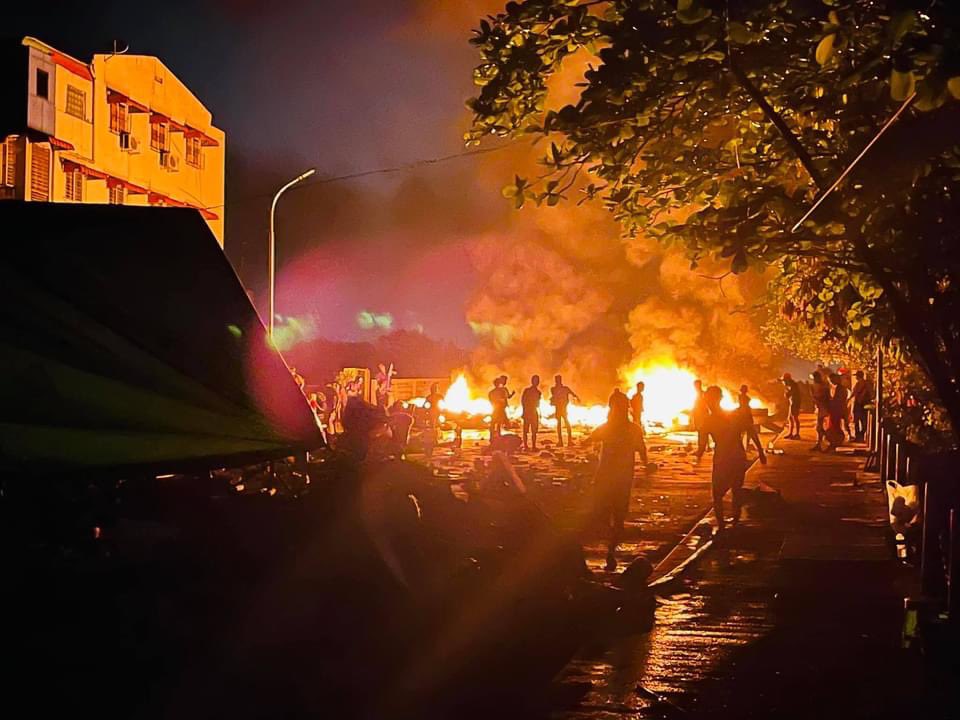 Journalists in Myanmar face worsening conditions as military crackdowns and violence is compelling many to flee, writes Phil Thornton.

Freelance journalist Ko Wei Min* describes thick black smoke mushrooming over his home in Hlaing Tha Yar and reflects back to Sunday, March 14, when the “soldiers came in 20 trucks armed with machine guns.” The smoke that hung over Hlaing Tha Yar like a war zone came from Chinese-owned factories torched by unknown arsonists and resident roadblocks set ablaze by both protestors and soldiers.

Ko Wei Min explained to the International Federation of Journalists (IFJ) that by the next day local hospitals were clogged with dead and injured civilians: “Snipers and soldiers opened fire on protestors, they didn’t stand a chance, what could they do, they were unarmed. They will keep killing…when will it be enough?”

The Assistance Association for Political Prisoners (AAPP) confirmed as a result of shootings by soldiers and security forces in Hlaing Thar Yar “22 civilians had died and more than 20 were wounded, three critically.” A senior officer with an ethnic armed group explained to IFJ that killshots to the heads of the dead are an indication that snipers had been used in the deadly crackdown.

Ko Wei Min’s ability to work as a journalist has been blocked by his fear of soldiers along with cuts to his internet – including both his mobile phone and house routers.

“Roads are closed. Soldiers are looting…beating…kicking people. Doesn’t matter we are working journalists. There’s no laws to protect us and if we are arrested… who knows what they will do to us. Look, they arrested the president and the state counsellor…if they can do that, it goes without saying what they can do to the rest of us…”

Before the military coup on February 1, Hlaing Tha Yar, only 20kms from Yangon city center, was known as the largest industrial zone in the region. A magnet for most of the estimated 800,000 workers who moved there from all over Myanmar to try to make a living in the more than 650 factories making garments, shoes, foodstuff and light industry products. Hlaing Tha Yar has a reputation as a tough township; crime is high, loan sharks feed on low-paid workers, pot-holed roads are a nightmare, street lights are almost non-existent, but workers are renowned for fighting for their industrial rights.

Myanmar’s military junta declared Martial Law in six Yangon townships, including Hlaing Tha Yar on Monday, March 15. Local news reports indicate the level of violence security forces are prepared to use against workers and protestors. One confrontation, between workers and management, at a Chinese owned factory over unpaid wages ended with at least six workers shot dead.

Myanmar Now reported: “Workers had gone to the Xing Jia factory in Industrial Zone (1) to collect their wages, but conflict arose when they were not given the full payment they were owed.” The Chinese owner called soldiers and police to the factory. Myanmar Now said police slapped a woman organizer and “When she hit back, they shot her.” Security forces arrested as many as 70 workers. When people “demanded their release, armed forces opened fire into the crowd, killing five more people, on Tuesday 17 March.” Reuters reported on March 17 that as many as 40 civilians were dead and thousands of residents were fleeing the township as a result of killings, factory fires and Martial Law.

Ko Wei Min, fearing for his security, left his home in Hlaing Tha Yar for what he hopes is a safe place. He said: “There was no internet, all roads closed, and now Martial Law. I can’t work like this… I moved and will now try to do news for radio.”

Ko Wei Min is not the only journalist who has had to abandon his work and home in search of a safe refuge. Kyaw Win decided it was time to move when he heard his reporting had become a news item on the military controlled MRTV.

“They said my stories were fake news. Then my area was searched by soldiers. I live in a poor area. I was told six armed soldiers came to my street, looking for rooms. I wasn’t there and feared going back.”

Like a growing number of other people who fled security forces hunting coup protestors, doctors, civil servants, activists, politicians and journalists, Kyaw Win made his way to the Thai Myanmar border and what he hopes is safety. Getting there was not certain – he had to avoid numerous checkpoints, informers and a lack of certainty of what he would find when he got there.

“I made it to KNU (Karen National Union) controlled area. They’re helping me. I’ve been advised by a foreign embassy to get UN help, but who can I trust? I can’t just cross over into Thailand because there’s Covid quarantine restrictions, visa requirements and I’m low on money. I can’t use my bank account. The internet shutdown crippled the whole country, it’s hard to get advice from friends and colleagues.”

The KNU have had a ceasefire with the Myanmar military since January 2012 and signed the Nationwide Ceasefire Agreement (NCA) in October 2015 after more than 70 years of fighting Myanmar military dictatorships. The KNU’s head of foreign affairs, Padoh Saw Taw Nee, in a telephone interview explained to IFJ, the difficulties of looking after the growing number of people fleeing military violence in Myanmar.

“There are now as many as 600 new arrivals – representing all walks of life – doctors, strike leaders, students, activists, police and army and journalists. They left because they fear for their lives. It was difficult for them getting to the border. There are many Burma Army checkpoints to get through.”

Padoh Taw Nee said the KNU will continue to offer assistance, despite being low on resources.

“We’ll help as much as we can. This is an international humanitarian issued caused by the military coup. We’ll continue to feed, shelter and look after these people as best we can.”

“From the middle of December 2020, villages in our 3rd and 5th Brigades have been shelled from their homes. There are now 7,500 of our people displaced and in desperate need of help. The Burma (Myanmar) Army has restricted aid getting through, but we are working on ways to getting medicine, food, shelter and warm clothing to them.”

Padoh Taw Nee said Myanmar army had violated the terms of the ceasefire agreement between the KNU and the government.

“The NCA is dead… it’s paralyzed going nowhere. We attended in good faith, but the military could not be trusted. They attacked our villagers and now we have a coup. We have said we will strongly support the people’s movement and the protestor’s right to have their legally elected representatives in parliament.”

Padoh Taw Nee said as the numbers of refugees are likely to increase as the military continues its offensive across the country, the KNU cannot be expected to deal with the crisis alone.

“We don’t know how long we can keep feeding and sheltering the refugees without assistance – we need help. This is now an international humanitarian problem and these people will need support, a lot of support. The Burma Army has to stop its attacks on its citizens and on ethnic people.”

Across the border in Thailand’s Tak province, local authorities have been reported as having made arrangements to take in between 25,000 to 50,000 refugees fleeing Myanmar’s military violence. Reports suggest that the military violence is on the increase. As of March 23, the Assistance Association for Political Prisoners documented 2,682 people arrested. Of those 41 were journalists and seven were artists and writers.

Aung Thura, a local BBC reporter and Than Htike Aung, a Mizzima journalist, were both arrested when covering the court hearing of 79-year-old Win Htein, a National League for Democracy member and former political prisoner. A journalist told IFJ two plainclothes military intelligence agents took the two journalists to an undisclosed location in an unmarked car.

The military are using Section 505 (a) of the Penal Code to arrest journalists without a warrant. Section 505(a) makes it a crime for journalists to publish statements critical of the military. AAPP said at least 261 people had been killed by the military and its security forces, but said “the number of casualties is likely much higher.”

Myanmar’s last remaining independent newspaper, The Standard Time Daily, has now also been forced to stop printing because of Martial Law restrictions enforced by soldiers and police, as well as  concerns for staff safety. Ng Maung has worked the frontline of the protests in Mandalay since the beginning of the coup on February 1 and told IFJ the closure of The Standard Time Daily is another huge loss for freedom of information. The military’s sponsored Global New Light of Myanmar (GNLM) reported the licenses of Myanmar Now, Mizzima Media, Democratic Voice of Burma (DVB), 7 Day News and Khit Thit Media had been withdrawn from 8 March. The GNLM said the five media outlets were “banned from publishing or broadcasting” or using any kind of media or technology platforms.

Ng Maung said internet blackouts and a lack of protection for journalists is making it hard to work and easy for security forces to commit crimes.

“The press are targets. My organization cannot print hard copies of our publication… we are restricted to reporting online only, if we can get access. We’re still trying to provide accurate information to the people, show what’s happening in our country. The police and army have deadly weapons, we have our cameras, but we must keep working to show the military crimes, the world must know the truth.”

*Please note names have been changed for the protection of journalists

Phil Thornton is an adviser for the International Federation of Journalists in South East Asia.