After the No-confidence Motion: Regeneration or Death by Suicide? – Tisaranee Gunasekara 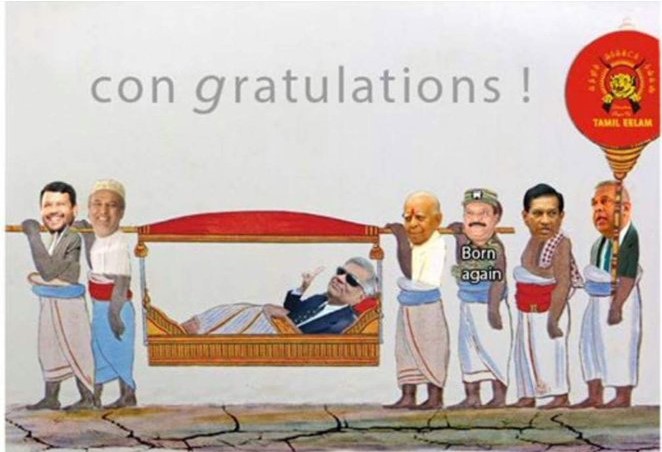 “A Lion used to prowl about a field in which Four Oxen dwelt. Many a time he tried to attack them; but they turned their tails to one another, so that whichever way he approached them he was met by the horns of one of them. At last, however, they fell a-quarrelling among themselves, and each went off to pasture alone. The Lion attacked them one by one and soon made an end of all four.
“Aesop (The four oxen and the lion)

The potency of that anti-democratic opposition would have waned, had the Sirisena-Wickremesinghe administration fulfilled its main electoral promises. Mahinda Rajapaksa’s hunger for power is a visceral thing; he wouldn’t have retired irrespective of how many times the electorate rejected him. But with good and effective governance, his capacity to dominate the oppositional space and dictate the terms of Southern political engagement could have been negated. From being a game-changer, the Rajapaksa factor in Lankan politics could have been reduced to a minor – albeit vocal – irritant.

But the Rajapaksas were not defanged and the guilt belongs to both Maithripala Sirisena and Ranil Wickremesinghe. Mr. Wickremesinghe is the guiltier one since he protected the Rajapaksas from prosecution in the hope of dividing the SLFP and benefitting from that division. His tactic backfired. Mahinda Rajapaksa’s SLPP did what the SLMP of Vijaya Kumaratunga and Chandrika Bandaranaike and the DUNF of Lalith Athulathmudali and Gamini Dissanayake tried to do and failed – overtake and replace the parent party. The SLPP did not divide the SLFP; it decimated the SLFP and reduced it to the status of a politico-electoral featherweight.

Sri Lanka still has a two-party system, but the two parties are the SLPP and the UNP. The best the SLFP can hope for, if it contests alone, is to gain the third place, ahead of the TNA and the JVP.

The UNP’s position is only marginally better. It cannot hope to defeat the SLPP on its own, be it at a provincial, presidential or a parliamentary election. It can defeat the SLPP only in alliance with the SLFP.

So the lesson of 2015 is valid still and will be valid in 2020. Only the broadest possible unity of all anti-Rajapaksa forces could defeat the Rajapaksa project in 2015. Once that unity fractured, once the UNP and the SLFP turned on each other, the Sirisena-Wickremesinghe government became existentially threatened. Today the question is not whether the government can prevail in 2020 but whether it can survive until then.

The Owl, Pussycat and the Pea green Boat

The No Confidence Motion, like the defeat of February 2018, was a self-inflicted wound. It happened because Ranil Wickremesinghe and Maithripala Sirisena forgot that the victories of 2015 turned them into conjoined twins. Neither can survive alone, let alone in opposition to each other. If one fell, the other would fall too. 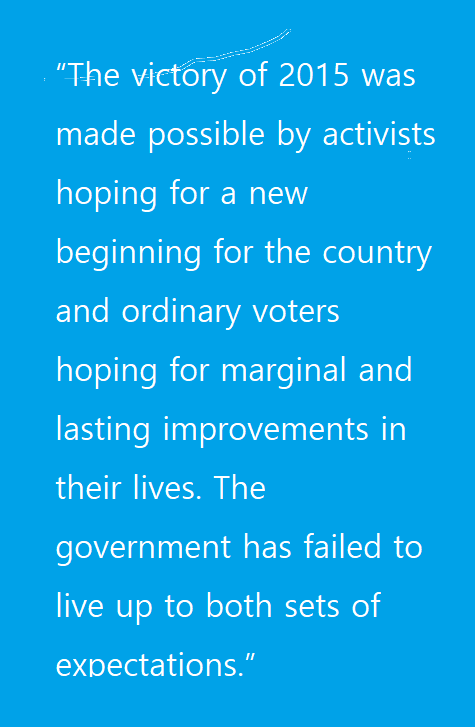 Mr. Sirisena can never form an unadulterated SLFP government; the numbers simply do not add up. The SLPP will not ally with him. If he hopes to create dissension in the Rajapaksa family by protecting Gotabhaya Rajapaksa, any such effort will be an exercise in futility. Eventually, he will find himself derided in the anti-Rajapaksa camp and friendless in the Rajapaksa camp, facing the wrath of the Rajapaksas alone.

Mr. Wickremesinghe can form an unadulterated UNP government but it will be neither stable nor enduring. It will last for a short while, make too many mistakes by succumbing to partisan short-sightedness and be pummelled by the electorate at provincial and national level elections.

The only government that can survive until 2020 is a Sirisena-Wickremesinghe administration. And if the two leaders are willing to put aside their differences and work together to fulfil their 2015 mandate, they have a fair chance of prevailing in 2020. But if they continue with their infantile squabbling, they will be defeated by the electorate and destroyed by the incoming Rajapaksas, together with Sri Lanka’s still fragile democracy.

The victory of 2015 was made possible by activists hoping for a new beginning for the country and ordinary voters hoping for marginal and lasting improvements in their lives. The government has failed to live up to both sets of expectations. Instead of focusing on its mandate it focused on helping kith and kin in a distressing replay of Rajapaksa governance. Mr. Sirisena placed the mega-profits of his rice-miller brother above the basic needs of millions of rice-eating Lankans, not to mention the poor peasantry. Mr. Wickremesinghe elevated his friends to great heights and was let down by most of them. His rank favouritism has caused irreparable damage to his Mr. Clean image.

The defeat at the LG polls should have brought the government to its senses. It didn’t. Instead the president plunged the government and himself into the No Confidence mire. Had President Sirisena thrown his weight behind his prime minister even at the eleventh hour, he could have claimed a slice of the final victory. Instead he dithered, turning his stance on the No Confidence Motion into a farcical guessing game. As a result he lost the respect of his supporters without gaining the support of his enemies. He is being flayed by the JO and derided by the UNP. His supposed warning to the UNP against seeking TNA support has caused serious damage to his image as an anti-racist leader.

The No Confidence motion was supposed to break up the UNP. The UNP did seesaw wildly in the run up to the debate. But when it came to voting, the party stuck together. The SLFP, on the other hand, suffered a yet another fracture, with a majority of its parliamentarians abstaining and a minority voting with the SLPP. Those SLFP ministers who voted for the No Confidence Motion intend to cling to their posts. If the President allows them to do so, he will bring further disrepute to his party and himself, turning both into a comedic spectacle.

Is the president capable of learning from his multiple mistakes? Will he realise that his political legacy and his future depend on making a success of the remaining eighteen months of his presidency, a goal which requires the cooperation of the UNP? Will Mr. Wickremesinghe be mature and magnanimous, and make a sincere effort to mend fences with the President and regenerate their once productive working relationship? Or will he lose his head and give into euphoria and arrogance, mistaking a tactical victory for a strategic one?

Public memory is an ephemeral thing. If Mr. Sirisena and Mr. Wickremesinghe can patch up their relationship and return to the agenda of 2015, by 2020, the wasted years will be largely forgotten. As Opposition Leader R Sampanthan pointed out in his speech at the No Confidence Motion, “At the Local Authorities Elections held in February, 2018, a new political formation, Sri Lanka Podujana Peramuna, has done better than the President’s SLFP or the UPFA or the Prime Minister’s UNP or the UNF. It is our view that inadequate performance by the Government in the first half of their term was the cause of that result. If they performed better in the remaining two-and-a-half years, public disenchantment can change. Unfortunately, the Sri Lanka Podujana Peramuna does not want that to happen. They want to first defeat the Prime Minister and the next target will be the President. They want the Government brought down. We want the Government to implement the mandate given to it by the country in January and August, 2015.”

The SLPP won the local government election not because the Rajapaksa vote base increased between 2015 and 2018. There was no growth in the support for the Rajapaksas either in absolute or in relative terms. The SLPP victory was due in the main to the Rajapaksa ability to maintain its vote base and the acrimonious disunity in the anti-Rajapaksa camp.

So death by suicide is not the fate of the government. Regeneration is possible. But regeneration presupposes a willingness on the part of the president and the prime minister to realise the commonality of their interests, recreate a working-relationship and move fast to fulfil their joint-mandate. If they fail to do so, if they embrace vituperation and inimical competition, they will drown themselves and Lankan democracy in the swelling Rajapaksa seas. 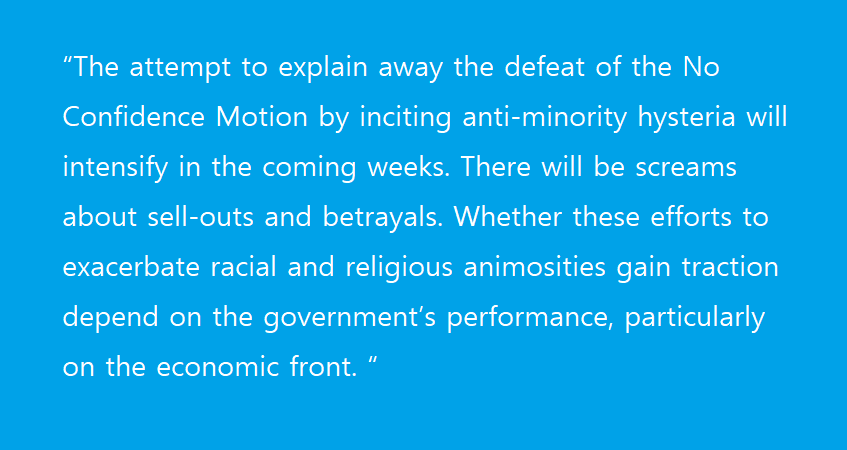 The outcome of the No Confidence Motion is a defeat for the SLPP and for the Rajapaksa project; a tactical defeat, one that is easily overcome, but a defeat nevertheless.

The SLPP was confident of winning the vote. It was confident of pushing the government and the country into an existential crisis. It expected the UNP to fracture and the SLFP legislators to vote for the motion en bloc (barring a couple of recalcitrants).

But those plans backfired. The UNP didn’t split. The SLFP did, with a majority of legislators opting to abstain (which, given the nature of the number’s game, was a way of helping not the SLPP but the UNP). The SLPP’s plan of wreaking havoc on the government and the country failed. Instead it imposed an unnecessary defeat on itself, thereby dimming the glory of its recent electoral victory.

In the aftermath of that unexpected and humiliating defeat, the Rajapaksas have returned to what they do in the aftermath of any defeat – depict the outcome as the result of a Tamil-Muslim-Western conspiracy. This was how they interpreted their defeat at the 2015 Presidential election. Having conceded the presidency, Mr. Rajapaksa flew to Hambantota and informed an adoring crowd that Mr. Sirisena’s victory was not a legitimate one as it was achieved with the help of Tamils and Muslims.

The attempt to explain away the defeat of the No Confidence Motion by inciting anti-minority hysteria will intensify in the coming weeks. There will be screams about sell-outs and betrayals. Whether these efforts to exacerbate racial and religious animosities gain traction depend on the government’s performance, particularly on the economic front.

The link between economic injustice and extremism is a proven one from the Germany of 1933 to the United States of 2016. As Tony Judt pointed out, in France a segment of the working class and the poor, disproportionately affected by economic austerity, became the vehicle of growth for the right wing National Front of Le Pens (father and daughter). These people were “looking for someone to blame and someone to follow” and found a home in the neo Fascist right, “whose programme consists of one long scream of resentment.”i This is the SLPP’s way and it will cleave to it with renewed vigour post-No Confidence Motion.

Debunking myths which breed conflict was one of the tasks the Sirisena-Wickremesinghe administration was supposed to undertake as a key pillar of its reconciliation effort. Unfortunately the government has failed to fulfil this promise. That failure, together with its dismal performance on the economic front, has recreated an environment conducive to extremism and intolerance. It has also enabled the Rajapaksas to define Lanka’s political centre in Sinhala-Buddhist supremacist terms and render ethno-religious racism respectable, again.

The Sirisena-Wickremesinghe administration’s inability to comprehend the economics of democracy is imperilling Lankan democracy. Its inability to comprehend the politics of racism is imperilling civil peace and societal stability. The victory at the No Confidence Motion gives the government a chance to see these mistakes in retrospect and an opportunity to correct the worst of them before the first round of provincial council polls later this year (or the next Kandy). But for that to happen, the President and the Prime Minister must recreate their working relationship and reaffirm their commitment to the agenda of 2015. That and that alone will determine whether the beating back of the No Confidence motion amounts to a lasting victory or an ephemeral one. Death by suicide is not inevitable. But it is still very possible.

i. Reappraisals – Reflections on the Forgotten Twentieth Century.