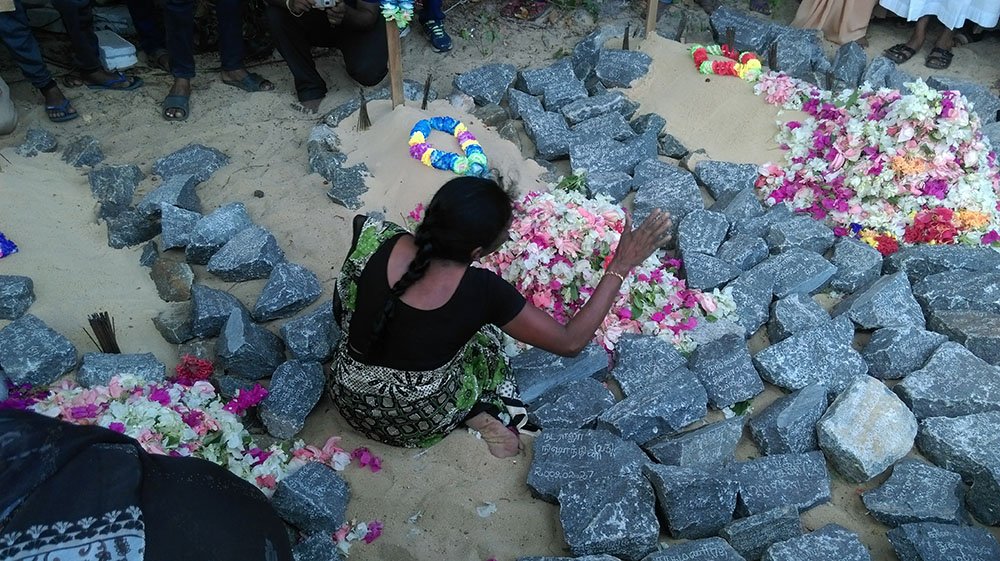 Image: A grieving Tamil mother at the remembrance stones with names carved on them. Photo credit @sampathslk

(radiovaticana)
As Sri Lanka marked the 8th anniversary of the end of its civil war on Thursday, an international human rights group criticized the government’s latest anti-terrorism bill saying rights abuse could continue under it. Sri Lanka’s Cabinet approved the third draft of the Counter Terrorism Act (CTA) on May 3, 2017, but no parliamentary vote has been set. Human Rights Watch said that the bill falls far short of the government’s pledges to the United Nations Human Rights Council in 2015 to end abusive detention without charge. While the bill improves upon the draconian Prevention of Terrorism Act (PTA), it would still permit many of the abuses occurring under current law, and raises a number of new concerns, the New York-based group said in a statement on may 18.

The CTA has been proposed to replace the archaic PTA, which was enacted in 1979 to deal with the rebels of the Liberation Tigers of Tamil Eelam (LTTE). The UN and rights groups have accused the Sri Lankan military of killing thousands of civilians, ‎mostly ‎Tamils, during the final weeks of the war, which ended on May 18, 2009‎, and have pressed for justice for the families of those ‎who ‎disappeared. ‎More than 100,000 are believed to have died and some ‎‎65,000 went missing during the 26-‎year conflict.‎

“Sri Lanka’s counterterrorism bill buries its abusive intent under detailed procedures, but it still won’t protect people from wrongful detention,” said Brad Adams, Asia director. “While some provisions could prevent abuses, the fundamental danger of prolonged detention without charge remains. This isn’t what UN member countries sought when they agreed that Sri Lanka would reform its security laws.” Human Rights Watch urged the government to reject any counterterrorism legislation that is not in accordance with international best practices.

Recent interviews by Human Rights Watch found that those arrested under the PTA, including since the end of the war, gave accounts of torture and mistreatment, forced confessions, and denial of basic rights such as access to lawyers or family members. The rights group acknowledged improvement in several sectors under the proposed counterterrorism law, such as greater detainee access to counsel, entry of magistrates and Human Rights Commission officers to detention facilities, and reporting requirements that could help prevent enforced disappearances. However, a number of provisions are likely to facilitate human rights abuses, such as the bill’s broad and vague definitions of terrorist acts, which include a wide array of illegal conduct, and the power of police and military officers to make arrests without a warrant. Suspects may be detained without charge for 12 months, a reduction from the 18 months permitted under the PTA. Bail is only to be granted for exceptional reasons. If enacted, the new law would prohibit ordinary dealings with many ethnic Tamil organizations, including those based abroad, that were declared illegal during the armed conflict and remain so, even if during or since the war they never engaged in any terrorist activity.

On the 8th anniversary of the end of the Sri Lankan conflict, Amnesty International also called for the repeal of the “highly repressive” PTA, saying any legislation replacing it should meet international standards. The ‎failure to repeal the notorious law, it said, is one of several commitments that the government has ‎stalled on since coming to power two years ago, when it pledged to deliver truth, justice and reparation ‎to victims of the conflict and enact reforms that would prevent further human rights violations.”

‎“The PTA is a highly repressive law that contributed to many of the human rights violations during and ‎following Sri Lanka’s conflict. Despite being in power for two years, the current government has failed ‎on its promise to repeal the law,” said Biraj Patnaik, Amnesty International’s South Asia Director. ‎ “What’s worse, it’s considering adopting a new Counter Terrorism Act that would continue to give the police very broad powers to arrest and detain suspects without charge and place them in administrative detention,” Patnaik said.

The London-based rights group called on the Sri Lankan government to present a clear and coordinated roadmap to implement its commitments to justice, truth, reparation and guarantees of non-recurrence, including repeal of the PTA. It noted that under the draconian law still in force, the police retain broad powers to arrest and detain suspects without effective human rights safeguards. Amnesty said it has received credible testimony alleging human rights violations in the aftermath of the conflict under the PTA, with Sri Lankan security forces subjecting people to arbitrary arrest, detention, torture, rape and enforced disappearance.

“Transparency is absolutely vital. Draft legislation, including the CTA, should be open for public and civil society consultation,” Patnaik said. Despite the government’s commitments, it has yet to establish effective justice mechanisms to investigate abuses of international human rights and international humanitarian by all sides of the conflict, including acts reported during the final months of the conflict that may amount to war crimes and crimes against humanity.

“Each anniversary is a depressing reminder of the conflict’s ugly and unresolved legacy. Every year that passes is a reminder of the horrific injustices that were visited on people and what little has been done to address them. Eight years is a long time to wait. The victims and their families should not have to wait any longer. Justice is long overdue,” said Patnaik. Amnesty International is deeply concerned about the harassment of activists and victims who are campaigning for justice and memorializing the victims of the conflict. “It is appalling that nearly a decade after the conflict ended, people are still being prevented from remembering the dead. No one should be stopped from demanding justice or grieving the loss of loved ones,” said Patnaik.