A trial-at-bar in Jaffna and a governance muddle in Colombo – Kishali Pinto Jayawaradena. 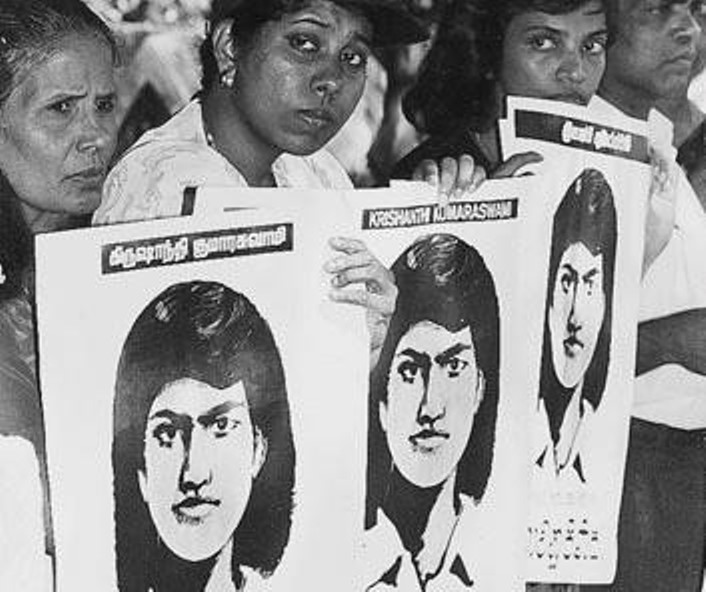 In midst of an impossible muddle of governance in Colombo, the handing down of the death sentence to the accused in the Sivaloganathan Vithya rape and murder case by a trial-at-bar in Jaffna this week is one tentative indication that, (to borrow from Longfellow) the mills of justice in Sri Lanka have started grinding again, exceedingly fine.

The phenomenon of exceptional prosecutions

Indeed, this trial is noteworthy in a way that goes far beyond its verdict. It is more than merely symbolic that the court sittings were held in Jaffna. The last such nationally prominent case was far back as the mid 1990’s when Chemmani school girl Krishanthi Kumaraswamy’s rape and murder, (as well as the murder of her mother, brother and neighbour), was prosecuted before a Colombo trial-at-bar.

This was also a successful prosecution at the time. Many would be struck by the poignant and painful commonalities. In both cases, the primary victims were bright schoolgirls, intent on pursuing their studies but robbed of those dreams by the vicious acts of others. Vithya was a child of the generation of the displaced with her family having to leave her native village Pungudutivu in 1990 due to war and returning only decades later. On all accounts, she had wanted to teach or be a journalist after her studies.

In-between these two prosecutions which are exceptional simply because they were successful, we have a sad litany of equally horrific rape and murder in the conflict torn North and East. In general, these were left to rot in the tangle of Sri Lanka’s judicial system without recourse. And common thereto was a broad concern relating to the inveterate pattern by which prosecutions of gross human rights abuses were invariably heard in Colombo rather than the areas where the violations took place in the first instance.

Discarding the farce of a legal process

In that regard, the Vidhya prosecution differed from the Krishanthi Kumaraswamy prosecution in that the trial-at-bar was held in Jaffna itself. Two years ago, the conviction handed down by the Jaffna High Court on four former soldiers in respect of the rape of one woman and the sexual harassment of another was another indication of the welcome change in earlier patterns. In the Vithya case, this was a trial-at-bar and it was even more significant that the sittings were held in Jaffna.

As remarked previously, trials of rape and murder occurring in the North should preferably be held in the courts of that province. This is not mere symbolism. There are immensely practical concerns involved. Generally, transfers of these trials have been due to the accused pleading that they would be at risk if the case is heard in the Court situated in the area where the violation occurred. Consequently transfer of such cases to a court in the predominantly Sinhala North Central Province or to Colombo became the pattern along with jury trials of predominantly Sinhalese jurors in past decades.

The transfers resulted in the victim or their family members or witnesses, often of Tamil origin and from the most marginalised villages in the North and East having to run the risk of increased harassment and often fear of death by the alleged perpetrators or their supporters. Financial constraints also resulted in many being unwilling to travel to unfamiliar locations. The successful prosecution of a case was hampered as a result.

The problems of transfers of cases

In the Mylanthanai massacre case in the early 1990s which concerned the killing of several villagers by soldiers who rioted apparently after the killing of late Major General Denzil Kobbekaduwa and other military command officers in Jaffna is one illustration. The non-summary inquiry originally took place in the Magistrate’s Court, Batticoloa, but following two appearances before the Batticoloa magistrate, the matter was transferred, on the application of the Attorney General, to the Polonnaruwa Magistrates’ Court. It was then transferred to Colombo despite protests of the lawyers watching the interests of the victims.

As was observed at the time, the witnesses are understandably unwilling to attend the courts at Polonnaruwa. And the danger is that when they absent themselves, warrants will be issued for their arrest in response to which they will have to furnish bail or be remanded. These were all seen as attempts to deliberately sabotage the legal process. In other rape cases, (for example, the Mannar Women Rape Case), though an attempt to move the hearing to Colombo was prevented, the case was transferred to Anuradhapura whereas it should have been before the Vavuniya High Court.

More recently the 2006 killing of 17 aid workers in Mutur was originally heard in the Mutur Magistrate’s Court (being the relevant court having jurisdiction in that matter) but later transferred to the Magistrate’s Court of Anuradhapura. Consequent to public protests, the case was transferred back to Kantalai. Then again, in the prosecution concerning the killing of five students in Thandikulam agriculture school (18.11.2006), the accused police constable who was arrested and indicted in the Vavuniya High Court in connection with the incident also requested a transfer to the Anuradhapura High Court on the basis that his life will be in danger if the trial proceeds in Vavuniya.

Being sensitive to the pain of victims

No doubt, the fact that active conflict was taking place in the North and East during these periods was a pertinent factor. However the routine manner in which these transfers occurred showed gross insensitivity to the victims and their families. The Vithya prosecution in particular concerned a violation of the law that could not be assessed on a simplistic equation of security forces against civilians which is ordinarily the case. Here, the nexus between criminal gangs, former cadres of the Liberation Tigers of Tamil Eelam (LTTE) and elements in the police, government and political establishment in the post war theatre was exemplified.

In the final analysis, though the heinous act by which a helpless young girl was ravaged by humans akin to wild animals cannot be reversed, civic conscious Sri Lankans must hail this verdict with considerable relief. These examples of the Rule of law working as it should assure a long alienated people that they are also, citizens of Sri Lanka. They accomplish far more than abstract constitutional reform amidst quarreling by political parties. This salutary commencement of High Court trials and trials-at-bar in the areas where the affected communities live, must continue without change. It is reported that the courthouse in Jaffna was full to capacity at the time that the verdict was handed down. This is effectively and wondrously how justice is claimed by citizens.