A rude but entirely predictable electoral shock: The alternative is too catastrophic to contemplate. 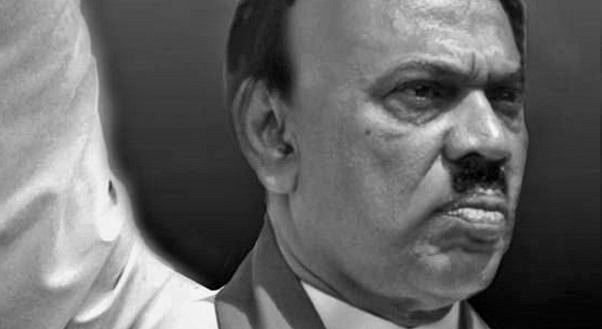 Image: Rajapaksa  is waiting to capture the power to establish autocratic family rule in Sri Lanka.

Those who are bewildered by the results of Sri Lanka’s local government elections a week ago need a harsh reality check if not a resounding knock to the head..

For it must be said that the rude punishment dealt by the electorate to the Sirisena-Wickremesinghe coalition government was entirely predictable. From mid last year to perhaps even earlier, massively increasing public discomfiture had turned to outright anger directed towards a coterie of quarreling and oftentimes openly incompetent rulers.

Granted, there were notable improvements in the Rule of Law. Yet the approach of the United National Party (UNP) driving the unity Government and equally blinded Colombo based civil society acolytes were informed by a deeply disturbingly elitist and patronizing mind frame. Ordinary citizens in the North and the South were treated much llike obedient cattle, to be shepherded and thought-manipulated into uncomplaining quiescence as high games of bond scams, wastage of public funds and an engineered ‘reconciliation process’ continued.

Committees sat in esoteric constitutional reform exercises in Colombo that touched on all the unhappy trigger points that had divided the Sri Lankan people since independence, such as religion, language and political power while the larger public was unforgivably left excluded and increasingly incensed. The image of an out-of-touch Government dictated to by international pressure grew even as the ‘yahapalanaya’ shine faded, aggravated by fulsome praise on the part of Western emissaries whose visits became disconcertingly frequent. Unsurprisingly this formed a useful point for the Rajapaksa opposition to labour.

The old devil of an unpatriotic UNP was resuscitated,leading to deadly cause and effect where the popular imagination was concerned.

Contrast between the elite and the marginalised

As commonly reminded, insanity is doing the same thing over and over again and expecting a different result. Well, for the unfortunate citizenry of this country, that lunacy has been exemplified by the conduct of the UNP for the exact same mistakes committed in 2001-2003 by the then ruling United National Front (UNF) government were repeated this time around as well.

[alert type=”success or warning or info or danger”]And crucially, basic governance faltered, resulting in serious economic consequences for the already poor and marginalised, including farmers being denied their fertiliser in the paddy growing regions of the land. Talking to rural voters in the areas of the North Central province and the Uva province, it was pointed out in these column spaces months ago that it was a grave misconception to think that village voters were not aware of the shenanigans going on in Colombo. Indeed, that awareness existed in painful and excruciating detail.[/alert]

At that time, I drew the grotesque contrast between farmers protesting in regard to inadequate fertiliser supplies in the sweltering sun while white-collar crooks in slick suits got away with millions shielded by patronage politics.

The truth of that could not be glossed over by blustering damage control in the last few months before the elections nor by rhetoric by the President. Where the Sri Lanka Freedom Party (SLFP) component of the Government was concerned, this was also percieved to be inefficient with some Ministers attracting as much censure as their UNP counterparts.

And most damagingly, the anti-corruption drive against the gross corruptors of the Rajapaksa era fizzled out in a splutter of damp squibs from 2015 itself. The public grew weary of watching front-liners of the previous regime walk to courts and back smiling broadly for the television cameras amidst halfhearted explanations of laws delays and uncooperative foreign governments by UNP Ministers.

But ensconced in a comforting and un-apologetically elitist Colombo bubble of misplaced complacency, eagerly nourished by advisors and civil society cheerleaders through the reassuring echo chambers of social media, the unity alliance seemed unprepared for the inevitable electoral shock sooner or later. In fact, there was a deep cynicism about the very need for introspection.

When justifiable critiques were made regarding failures of governance in early 2015 in these column spaces and elsewhere, these were dismissed as irrelevant. When the Prime Minister appeared in a show of bravado before the popularly termed Central Bank Treasury Bond Commission of Inquiry, there were showers of praise from the typically deluded, hailing the fact that this was the first time that a Prime Minister had deigned to grace a commission sitting.

Former President Chandrika Kumaratunga responded in a reprehensible congratulatory message and apologists of all shapes and forms scrambled to disguise basic failures of financial accountability.

Other ironies abounded. This was a contest conducted at the lowest levels of Sri Lanka’s electoral hierarchy for local government councils but which saw a President, a Prime Minister and a former President exchanging blows in clear games of political upmanship. And the outcome was foreseeable.

Weighing heavily in favour of former President Mahinda Rajapaksa on 10th February 2018, voters showed the contemptuous middle finger to all and sundry. It was a devastating blow to the exuberance of the democratic gains made in 2015

So let us be clear about one fact. The gross inequities of ‘yahapalanaya’ rule are at the root of Saturday’s electoral debacle. The blame is to be attributed fairly and squarely to this Government.

In the face of looming provincial and national level elections in the near future, the unity alliance must even now, look inwards and attempt serious course correction, if further ignominious defeats are to be avoided.

The alternative is too catastrophic to contemplate.