A Religious Police for the Rajapaksas 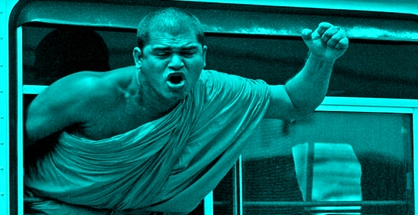 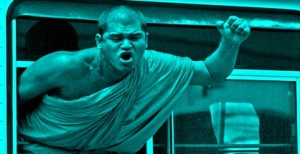 Tisaranee Gunasekara
“The BBS will take immediate steps to form a ‘Cane Force’ against those who act in a manner insulting to Buddhism during the Wesak season”. – Rev. Galagoda-Atte Gnanasara Thero (Lankadeepa – 17.5.2013)

Pro-democracy demonstrators protesting against the flawed Iranian Presidential Election of 2009 feared one enemy above all other – the Basij, Iran’s religious police. As the ‘Protectors’ of the values deemed valuable by Iran’s ruling Ayatollahs, Basij is generally occupied with breaking-up parties, destroying satellite dishes, lashing bloggers and attacking women considered ‘improperly attired’. But Basij is far more than a bunch of zealots with a penchant for violence and sadism; it is also an indispensable weapon in the arsenal of Iran’s rulers, a cudgel to be used against political opponents (including dissident Ayatollahs). Basij played a brutally effective role in defeating the 2009 pro-democracy movement. The next Presidential election is scheduled for June 2013 and Basij is busy cracking down on Tehran’s coffee shops, the political-oases of Iranian intellectuals/dissidents.

Mutaween – the Commission for Promotion of Virtue and Protection of Vice – is Saudi Arabia’s Basij. Its members also roam the streets searching for offenders, ranging from women ‘violating’ the dress-code and fans of Western music/films/TV shows to non-related males and females who interact with each other. In two emblematic cases, Mutaween arrested a 70 year old woman for having two unrelated men in her house (they were delivering bread; she got 70 lashes) and prevented fire fighters from rescuing female students from a burning school (15 girls died). Mutaween is also indispensable in buttressing the power of the Saudi ruling family. It cracks down on critics/dissidents; its leader recently warned that twitter users – one of the very few platforms available to the regime’s opponents in this über-despotic land – are eternally damned.

Now the Bodu Bala Sena wants to give Sri Lanka and its ruling clan their very own Sinhala-Buddhist religious police.

At a recent press conference, Ven. Galagoda-Atte Gnanasara Thero announced that the BBS plans to form a ‘Cane Force’ (Weval Balakaya) to ensure ‘proper conduct’ during the Wesak season: “The monks of Bodu Bala Sena will go from village to village carrying canes to control/punish those people who are acting indecently”1.

It is the BBS’s intake on the Buddha’s final exhortation to monks, to travel far and wide, for the wellbeing of the masses.

Religious fanatics cause damage other religions; but their most irreparable harm is reserved for their own faith. The likes of Taliban, Saudi Wahabis and Iran’s Ayatollahs cause far more harm to the reputation of Islam with their inanely brutal conduct than all the anti-Islamic propaganda of all ages. The Inquisition and the Witch-Hunts are still bywords for violent intolerance and persecution; the midget-descendents of those Christian fanatics still oppose the teaching of evolution in schools and demand the death penalty for homosexuals. Hindu fanatics who defend such repressive practices as casteism and Jewish zealots who demand a country segregated along not just Jewish-Palestinian but also gender-lines are the worst detractors of their own faiths.

If anything would be more damaging to Buddhism than Myanmar’s rampaging monks, it will be Sri Lanka’s BBS types, on the warpath against not just the ‘religious-other’ but also against fellow Buddhists who refuse to accept ludicrously fanatical fatwas.

When Martin Wickremesinghe’s Bava Tharanaya was published in the 1970’s, a vocal-minority of monks and lay people wanted it banned (probably without reading it) as an insult to the Gautama Buddha and Buddhism. Today, the BBS would burn the book, attack the bookshops and pronounce Martin Wickremesinghe to be a traitor in the pay of foreign conspirators.

The BBS’s ruffianly conduct towards a group of Buddhist monks protesting outside its headquarters is a warning of what Lankan Buddhists – including monks – can expect in a country in thrall to fanatics. Apart from a dress-code, a code-of-conduct, an Index of Banned books/movies/plays and a socio-cultural inquisition, the BBS-types might develop their own version of Buddhism, including what monks should sermonise on and which politics are kosher.

Fanaticism is often inane. During the annual Cultural Festival in Riyadh this April, Mutaween arrested and deported three male delegates from the United Arab Emirates for being ‘too good looking’! Take the artificial ho-ha about a storm named ‘Mahasen’; a BBS-type organisation stormed the Meteorological Department, demanded an immediate name-change and announced that the naming was a foreign conspiracy. This asinine conduct could have been dismissed as an antic of attention-seeking fanatics, expect that President Rajapaksa mentioned ‘the naming-of-the-storm-Mahasen issue’ in his Victory Day Speech, as proof of an anti-Lankan conspiracy.

That was silly; it was also indicative of the symbiotic relationship between the Rajapaksas and the Sinhala-Buddhist lunatic-fringe.

BBS: From Halal to the 13th Amendment

From warring against Muslims and policing Sinhala-Buddhists the BBS has waded into purely political-waters, by declaring war against the 13th Amendment.

The Rajapaksas excel at using cat’s paws. That is how they de-merged the North and the East, checkmated the IIGEP and impeached the Chief Justice (not a single Rajapaksa signed the impeachment motion).

The Siblings need a way out of the Northern PC poll. A postponement might compel India to put its weight behind Canada’s call to boycott the Hambantota Commonwealth. Delhi has already warned against denuding the 13th Amendment.

The Rajapaksas can hold a relatively free and fair election and allow the TNA to form a council (reserving the option of dissolving it later), but this option may not suit the Siblings’ maximalist-palate. An election suffused with violence and malpractices might ignite Tamilnadu and compel Delhi to sabotage the Hambantota Commonwealth.

So, why not get Sinhala-Buddhist maximalist organisations to launch a campaign against the Northern PC poll; and to file a case in the Supreme Court asking for a postponement? Then the Rajapaksas can escape retribution by telling Delhi that the Judiciary postponed the election. (Who can doubt Mohan Peiris’ willingness to give any order the Rajapaksas order him to give?)

The BBS, given its willingness to descend to levels even Wimal Weerawansa and Champika Ranawaka are a tad reluctant to – can play a ignobly pre-eminent role in such a campaign. Since it is not a UPFA member, the Rajapaksas can disclaim all responsibility; they can have their cake and eat it.

Just as economic neo-liberalism seeks to make the world more like what it was under pre-socialist capitalism in terms of relations of production, religious-fanaticism seeks a return to pre-Enlightenment (European-Christian) values/morals. Fanatics of all religions are not just viscerally opposed to the progressive, secular and libertarian currents which led to and resulted from European Enlightenment. They are also completely antagonistic to the tolerant ethos which characterised many a non-European civilisation/ruler from the Ottoman and Mogul Empires, Baghdad and Syrian Caliphates and Al Andalus to India’s Ashoka, ancient Greece, Persia and Mesopotamia.

Historically, the religion-politics nexus played a negative role, tearing countries apart, flattening everything progressive in its path, cultivating intolerance and obscurantism and dragging societies to places they never intended to go initially.

Saudi Arabia is the perfect example of what can happen to a country, even in our own time, when a ruling clan combine religion with politics to perpetuate itself in power.