A new phase in Lankan electoral politics has opened up 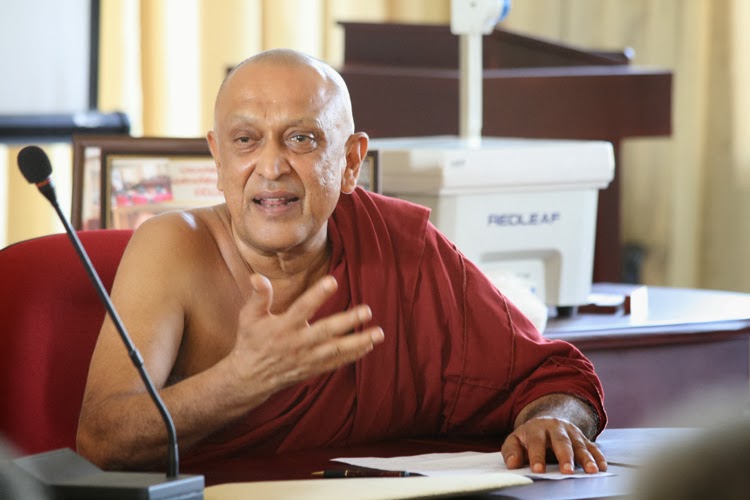 Sri Lanka: Sobitha thero’s Advances and Retreats Dr. Kumar David
Venerable Maduluwave Sobitha thero is a highly respected Buddhist monk and chief incumbent of the Kotte Naga Vihare. He is particularly well known for a campaign on good governance and a group under his leadership also produced a set of proposals to amend the constitution.
The key element in the proposals was the abolition of the Executive Presidency. Furthermore it has long been rumoured that he was a potential candidate for a short-term presidency, purely to push through constitutional changes after which he intends to leave the political scene altogether.

Therefore it was quite sensational when he gave an interview to a Tamil paper confirming his readiness to go ahead with this commitment. The interview, to a bright young journalist E. Jayaooriyan, received full page coverage in the Sunday Thinakural newspaper (Tamil) of 2 February, URL: http://www.thinakkural.lk/article.php?article/ybcvya9zpi8383db5bdc8ad41 …

This is the most significant political interview of the last 6 months, a stunner. I rubbed my eyes and had some difficulty, so I made it a point to meet Jayasooriyan and ask him: “Even if the thero did say all this, did he agree to have it published? Is he OK about going public?” Young J assured me that Sobitha had no problem in publicising his views. My conversation with J took place in the presence of the Editor, Sunday Thinakural and the Chief Editor. I have complete confidence in what Jayasooriyan told me.

Sobitha hamuduruwo said two things, one a significant and timely intervention, but the other was a volcano. The significant intervention was when he asserted: ‘Yes I am ready to stand as a Single-Issue (SI) presidential candidate, but if a former Chief Justice or a former President is interested, no problem, I am happy to step aside. I will serve for six months only within which time I will abolish the Executive Presidency (EP) and institute a parliamentary system by constitutional methods. The roots of bribery, corruption, nepotism and bad governance lie in EP”.

Now this is what many have been suggesting, but I for one had given up hope since his recent remarks suggested he was not interested; he is a real back and forth personality. So I was pleased that he had now taken a position from which it seemed he would not retreat. Unfortunately Sobitha is also known for going into reverse gear when he comes under pressure. So what happened next was not a complete surprise.

The Ceylon Today newspaper of 10 February carried an item that he told their reporter Gihan Nicholas that he was unwilling to contest as a common SI candidate to abolish EP but would be willing to support someone else in the same endeavour. Given this vacillating track record one does not know just what to make of the good thero’s state of mind. Perhaps he was scared off by the regime, perhaps supporters of another prospective candidate, say Chandrika Kumaratunga, talked him out of it. We have to wait and see. But one thing is for sure; a new phase in Lankan electoral politics has opened up.

Notwithstanding the importance of this electoral issue, what I believe to be real dynamite is another matter on which the thero held firm during the Nicholas interview.
http://www.ceylontoday.lk/16-55523-news-detail-intll-probe-against-sl-not-an-issue-sobhitha-thera.html

This is diametrically opposed to the stance of the Rajapakse government and the Sinhala monks and effigy burning extremists and puts him on collision course with the chauvinists. As far as I am concerned his statement is all that any democrat can ask for. We may each have our opinion about war-crimes and human rights, and these will differ from person to person, but the common ground is a demand for an international investigation. Since the Lankan regime has shown itself incapable of truthful investigations and since presidential commissions are held in ridicule, the exercise has to have an independent international component. The UNHRC too will welcome Sobitha’s stand
– South Asia Analysis Group