A Mendacious President and a Profaned State; President Mahinda Rajapaksa is lying. 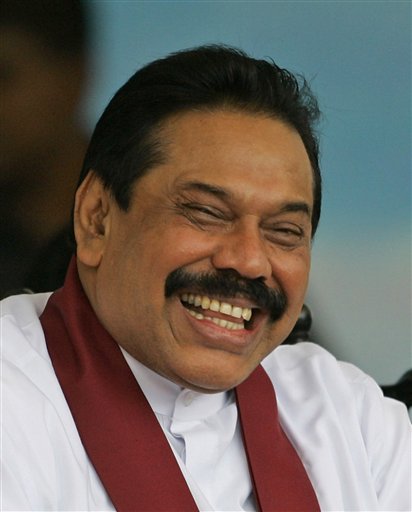 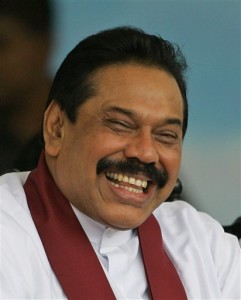 Tisaranee Gunasekara“We were like people marooned on a dissolving floe of ice; we dare not think of the moment when it would melt away”.
Czeslaw Milosz (The Captive Mind)

The President is lying when he says that he was not in favour of the impeachment, initially.

The President is lying when he says that he knew nothing about the impeachment until it was signed by 117 of his parliamentarian-serfs.

The President wants ‘We, the People,’ to believe that he and his siblings stand above the impeachment quagmire, that they are not tainted by the most unjust trial in the history of Sri Lanka. He thinks a few barefaced-lies would suffice to convince us of the Rajapaksa-ability to play the role of ‘honest and impartial mediator’ in this Rajapaksa-made imbroglio.

That is a measure of the total contempt he has for our intelligence. Do we not deserve it?

The impeachment is a 100% Rajapaksa project. Its aim is to subjugate the judiciary to Rajapaksa power and turn the courts of law into tools of Rajapaksa rule.

The brutally unjust modus operandi of the UPFA dominated Parliamentary Select Committee (PSC) was not accidental or even incidental. It was the result of a Rajapaksa plan to destroy the CJ and to frighten every other judicial officer into compliance. The impeachment is an act of political terrorism which targets the CJ plus the entire judiciary; and presidential dissimulation cannot efface the Rajapaksa-fingerprints inundating the scene of carnage.

The multiple experiences of the past seven years conclusively prove Mahinda Rajapaksa’s visceral incapacity to appoint or tolerate a truly independent anything. The man, who destroyed independent commissions, assaulted the media and regards judicial independence on par with treachery, is not going to appoint a committee which has the capacity to negate the work of his hand-picked PSC.

If the President appoints a committee its mandate will be clear: find the CJ guilty on at least one count, while, for appearances sake, exonerating her on all others. That way the Rajapaksas can maintain their veneer of ‘impartiality’ while getting rid of the CJ. It will severely embarrass the seven UPFA members of the PSC, but for the Rajapaksas they are nothing but expendable pawns, to be used and discarded as need commands.

President Rajapaksa’s blatant untruths about non-responsibility and his false promises about an ‘independent’ committee do not signal a real volte face. They merely aim to dissemble and deceive, confuse and confound, divide and conquer. Their sole purpose is to discourage national dissent and prevent the internationalisation of the issue; especially the latter.

When Mangala Samaraweera directed his appeal to the Commonwealth, he touched a raw-nerve of the regime. It is no secret that President Rajapaksa is looking forward to the 2013 Commonwealth Summit in Hambantota with the same juvenile yearning of a child anticipating a visit to Disneyland. The Chinese can satisfy Rajapaksa-cupidity; but Rajapaksa-vanity requires ministration by the West, especially by our former Colonial Ruler. (That is why Mahinda Rajapaksa earned the dubious distinction of being the sole President at the Commonwealth lunch for the British Queen).

The Commonwealth Summit is thus of enormous emotional and psychological significance to Sri Lanka’s ersatz Royals. And in this irrational yearning, the Rajapaksas are at their most vulnerable. The Siblings know that they are safe at the UN, because they enjoy Beijing’s protection. With the Security Council rendered ineffective via the Chinese veto, Geneva can do nothing more than pass resolutions. But the Commonwealth is quite another matter; there the Rajapaksas lack the weighty protection of a veto-wielding patron. Even if the venue of the summit is not shifted to another country, the boycott call can gain traction because of the impeachment travesty. And the possibility of a British-snub must be giving the President nightmares.

Thus the sudden pretence at reasonableness, the seeming willingness to compromise; the President will maintain this ‘pose’ until the impeachment issue is lost in the quicksand of time. Once the veneer of reason and impartiality succeeds in gutting national dissent and muting international reactions, the Siblings will move with flummoxing speed to impeach the CJ and appoint a new chief justice who is willing to place Rajapaksa needs/interests above the constitution and Rajapaksa whims/fancies above the law, all the time.

President Rajapaksa claims that he moved to cover-up the questionable share-transaction of the then NSB Chairman (and the CJ’s husband) because “that is how it should be done; after all he is our man” (Colombo Telegraph – 12.12.2012). That presidential statement reveals all about Rajapaksa justice. It explains why Duminda Silva and Mervyn Silva never went to jail while General Fonseka did; it also explains the impeachment. A regime which abuses the law to cover-up for friends will abuse the law to hound enemies. Clearly the Rajapaksa notion of justice dovetails perfectly with the Nazi notion of justice, as explicated by Hermann Göring, “I know two sorts of law because I know two sorts of men: those who are with us and those who are against us” (Quoted in The Monthly Review – March 2009).

The PSC violated natural justice because its mandate was to act according to Rajapaksa justice.

Victor Klemperer argued that the psychological occupation of Germany by the Nazis commenced with the corrupting and poisoning of words and concepts. For example, the Nazis changed the meaning of heroism, so that the fanatic became the new hero: “If someone replaces the words ‘heroic’ and ‘virtuous’ with fanatical for long enough, he will come to believe that a fanatic really is a virtuous hero and that no one can be a hero without fanaticism” (The Language of the Third Reich).

The Rajapaksas aim to forge a similar transformation in our notion of justice and injustice; the impeachment is a critical step in that dystopian journey.

Imagine the plight of the absolute majority of citizens if Lankan courts begin to follow the example of the PSC. Imagine judges like Wimal Weerawansa (abusively partial) or Anura Yapa (silently partial). Imagine trials in which a suspect is always presumed guilty and never given the time and the opportunity to prove otherwise. Imagine a judicial system in which the judge prosecutes and the prosecutor judges. Imagine living with Kekille justice for the rest of our lives.

The impeachment imperils more than the judiciary. As Chandra Jayaratne has pointed out, by making available the account details of a client to the parliamentarians who signed the impeachment motion, in blatant disregard of the due process, the CJ’s bank/s violated principles of banking secrecy and best banking practices. Are the Rajapaksas planning to replace normal banking principles and practices with Rajapaksa banking principles and practices? The havoc such a process will wreak on the economy and the investment climate is easily fathomable.

Clearly nothing is safe from the Rajapaksa-contagion. In their pursuit of power, the Siblings will despoil all. Every Lankan institution, public or private, will be profaned. Can anything less extreme be expected from a regime which is persecuting an aged-grandmother for not betraying her grandson?

Are we willing to risk such a future? Are we ready to live in such a country?