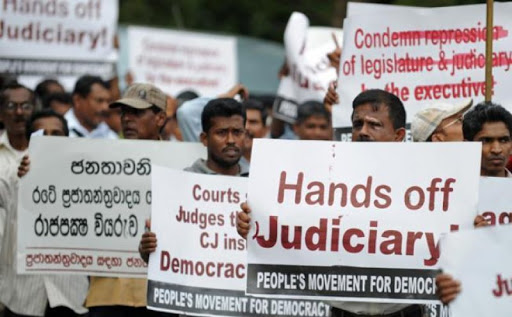 To mercilessly mangle Bob Dylan’s timeless words, ‘a hard rain’ will fall on Sri Lanka if hammer blows continue to be aimed at judicial, prosecutorial and legal institutions by the country’s political leadership. In the end, this will not spare judges and the judiciary itself, in the manner of recent history as we have already seen. There is no immunity for this devastation; it will visit each and every one of us.

The Cabinet’s approval, in January 2021, of recommendations and findings of the Presidential Commission of Inquiry (PCoI) probing allegations pertaining to political victimization by the ‘yahapalanaya’ regime is one more relentless step in this process. The Opposition has vigorously objected to the findings of this Commission, putting forward a plethora of complaints. Foremost is that the process of inquiry followed by the Commission was neither fair or just, that parties against whom adverse findings were made were not afforded natural justice and that the remit of this body was exceeded in the complaints that it entertained, some of which were complaints of political victimisation by private parties.

Such grievances may be well founded. However complainants may best be advised to spend their time in preparing well thought out legal challenges to the findings of that Commission rather than holding press conferences with ‘sound and fury’, signifying very little. They may also abstain from rushing to court with defective papers, as has unfortunately been the case in recent times. Certainly, legal precedents on this exact point of unjust treatment, that is the source of their complaint, are several.

The use of Commissions of Inquiry as tools to circumvent the ordinary legal process is of historical record. This is however, the first time that we are seeing such Commissions directly intervening into ongoing cases in trial before court, pressurising the Attorney General in regard to ongoing prosecutions or indeed, pronouncing on the validity of convictions entered into by a court of record and upheld by the apex court. To that extent, we are experiencing a new phenomenon and one that will gravely impact on the integrity of the judicial system.

Limitations of Commissions of Inquiry

But if we are looking at the limitations within which a Commission of Inquiry must operate and the safeguards that it must observe, case law is replete with warnings on the same. One notable instance concerns the findings of the Special Presidential Commission of Inquiry established under warrant dated 7th December 1994, to investigate and report into the assassination of Lalith Athulathmudali and connected events, (published as a Sessional Paper in the Parliament on 30th of January 1998). Its findings were successfully challenged in the Supreme Court by aggrieved parties on the basis that the process followed was biased and politically partial.

For example, a senior police officer DIG A.S. Seneviratne complained against his punishment based on the recommendations of this Commission. DIG Seneviratne, along with other police officers, had been found by the Commission to have “assisted in the (Athulathmudali) assassination and the plot to fabricate evidence.” The Court used uncharacteristically severe language, observing that, ‘(Seneviratne) was condemned by the Commission without being given an opportunity of refuting what was being urged against him …’

Indeed, in all instances where this Report and other Commission Reports were challenged in the Supreme Court, several consistent principles emerge. Importantly, the Court declined to accept the Commission’s defence that recommendations may be made by Commissioners against individuals on the basis of findings by investigators. Rather, each and every person against whom adverse recommendations have been made, should have been himself or herself questioned by the Commission. Handing over this responsibility to others to investigate and record the testimony of persons was not sufficient.

Constitutional safeguards and due process

The defence that it would have been impracticable for the Commission itself to hear and interrogate large numbers of persons being questioned was rejected. Implicated persons moreover had the right to adequate legal representation, which meant the opportunity to properly present the case in defence before the Commission. Not affording that opportunity meant that the procedural safeguards of natural justice had not been met, impacting adversely on the finding.

Arguments to the contrary that such procedures were not possible due to administrative difficulties, the need for secrecy or to preserve the confidentiality of ‘other’ individuals have been summarily dismissed. For example, when recommendations of the Batalanda Commission of Inquiry were impugned by affected persons who had been disciplinarily dealt with as a result, the Court observed that the manner in which the complainants had been treated was ‘distressing and disturbing.’ It was contrary to basic constitutional safeguards and due process guarantees.

Meanwhile, hard on the heels of the recent Cabinet approval of the recommendations of this Commission of Inquiry, President Gotabhaya Rajapaksa appointed a Special Presidential Commission of Inquiry (SPCOI). Again, this is certainly the first time that a SPCOI has been established to ‘implement’ the recommendations of a COI. Both bodies are different, the SPCOI under the 1978 Law and vested with draconian powers as opposed to the COI Act (1948) which is its softer cousin.Generally, the pattern has been to refer recommendations of a COI to the Attorney General to take steps under the penal law.

Ghoulish ghosts of the past are recalled

This was a measure that was specially facilitated by an Amendment Act (2008) to the 1948 COI Act. But all that was of little use here, one would assume, given that it was the Attorney General himself who sounded warning bells the loudest in the wake of his own officers being summoned to the Commission of Inquiry on political victimisation and questioned as to ongoing prosecutions. It was also the Attorney General who resisted such questioning on the basis (correctly) that a fact-finding Commission of Inquiry had no powers to interfere with ongoing court cases.

The establishment of a SPCOI, as inevitable as it is, recalls ghosts of the past and particularly ghoulish ones at that. In principle, there is much irony in this Government resorting to a law that was born out of the desire of the United National Party (UNP) Government at the time, to unjustly deprive the Sri Lanka Freedom Party (SLFP) matriarch Sirimavo Bandaranaike of her civic rights. But this is a nicety lost in turbulent political winds. Warnings that, as all roads lead to Rome, the path of this Government’s push for ‘justice’ for its loyalists will finally converge on a SPCOI, were made early on.

Little more than a year ago, it was pointed out in these column spaces that the use of this Law as a political instrument of revenge by various Governments in our history has been ‘legendary and frightening’ (‘The Real Risks of a Special Presidential Commission of Inquiry, the Sunday Times, 08.12.2019). At that point, the proposal was for a SPCOI to be established at the outset itself to look into the purported victimisations of public servants by the ‘yahapalanaya’ regime, its Anti-Corruption committee and its FCID (Financial Crimes Investigation Division).

A complete collapse of the system

Obviously, that idea was discarded for a ‘softer approach’ as it were, by initially establishing a Commission of Inquiry to frame the recommendations which task has now been completed. It remains to be seen as to how this particular PCOI will conduct itself. Even so, judges, lawyers and those who have a modicum of interest in Sri Lanka’s institutions of justice must surely take cognizance of clear and present dangers, if the system is not to completely collapse on our heads.

Certainly, that is now a distinct possibility.