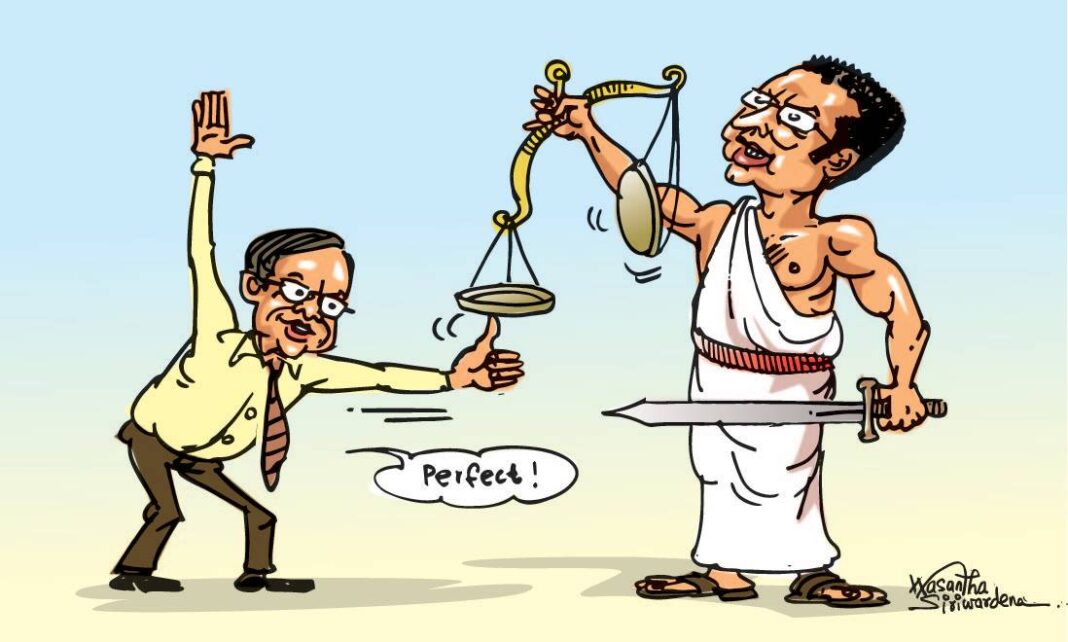 President Gotabaya Rajapaksa and his Minister of Justice who went charging into Parliament this week to pontificate or plead for judges to be protected ‘from criticism’ may well be advised to reflect on some salutary truths.

In South Asia’s less than salubrious context of the separation of powers being limited to constitutional theory rather than evidenced in practice, ruling party politicians defending the independence of the judiciary is the surest sign that the judicial institution is not in a happy state. The Minister justified the wheels of justice turning in fortuitous ways towards Government politicians in recent weeks by arguing that these were all cases filed to extract political vengeance by the previous administration.

His most peculiar logic, (or rather, the absence thereof), was that, as a lawyer appearing in many of these cases, he knew that they were trumped up accusations. Far be it from me to waste valuable column inches on asinine politicians but this truly remarkable idiocy belongs in a class of its own. As the President’s personal lawyer once upon a doubtlessly beneficial time not so long ago, the Minister may well believe in his brief that his client, other members of the Rajapaksa family and their sundry supporters including public servants, indicted variously on serious charges ranging from misappropriation to abuse of public property, were innocent.

Even so, that is a subjective belief, not to be pressed upon the public as an absurd justification for the propriety of court verdicts which (apparently) the Minister was trying to uphold. Surely those decisions, of the trial court or the appeal court as the case may be, should be defended or critiqued for that matter on an objective assessment of their merits or demerits? Indeed, this Ministerial tilting at the windmills of Opposition parliamentarians who pounced on recent acquittals of the Government’s men to question the legitimacy of the rulings, does far more damage than good to their own cause.

“I know the law’ and the lack of commonsense

It reminds me of that ‘yahapalanaya’ (good governance) Minister of Law and Order who, when the Avant Garde floating armoury scandal broke in the country, defended his former client, the Avant Garde security firm accused of siphoning massive sums of public money to provide private security services. That Ministerial defence on the floor of the House, was on the basis that ‘he knew’ that nothing untoward had happened. He resigned following the uproar over that statement but after a discreet interval, was brought back into the Cabinet by his Prime Minister Ranil Wickremesinghe. Yahapalanaya’ (then) or ‘Saubhagya dakma’ (now), lawyer-Ministers shine brighter in the clowns gallery of Parliament than any of their colleagues, it seems.

This harsh admonition applies without distinction to those who see no conflict of interest in defending their onetime clients in Parliament while holding Cabinet portfolios on behalf of the Sri Lankan State as well as those who absurdly argue that the President should be given absolute immunity from suit as otherwise, ‘he will waste his time in court.’ That particular canard was rejected outright by the Supreme Court in retaining the right of a citizen to challenge Presidential acts in fundamental rights actions.

That at least was preserved in the 20th Amendment to the Constitution whatever else the Court thought fit to throw out, much like one would say, ‘the proverbial baby with the bathwater.’ But, the consequential hard truth is that, very much like that bawdy Sinhalese comedy where a roisterous drunkard goes about in the village insisting that, ‘he knows the law,’ our Ministers who purport to ‘know the law’ and pompously hold forth to the common herd, appear to know very little thereof, neither the law or sheer commonsense, one might add.

But to return to this column’s focus of ill advised Government blathering on the independence of the judiciary, this includes President Rajapaksa’s injunction that the judiciary must rise and ‘use its powers to fight,’ (as per press releases carried by the state media), what he has termed as the ‘menace’ of an ‘onslaught on the dignity and independence of legal systems.’ This was said during the swearing in of twenty one new judges to Sri Lanka’s superior courts, courtsey of an expansion of judges being smuggled into the 20th Amendment to the Constitution at the eleventh hour in Parliament.  There are several discordant notes in this address that must be pointed to.

First, it is incumbent on the judicial institution to maintain its own dignity through the decorum of its members who must not carry the public stigma of behaviour that disgraces high judicial office. It is thus that the judiciary secures the ‘independent’ badge of pride that is essential for its rulings to have weight in society. It does so by the impartial discharging of its constitutional powers, not by ‘fighting’ anyone, by having Ministers plead on their behalf or by evident overreach in the exercise of powers of contempt against critics. The ugly imbroglio that the Indian Supreme Court has now got itself into by hauling up lawyers who criticise ‘political’ judges must serve as a warning for us as well.

Secondly, the President’s remark that freedom of speech is not a ‘licence to defame and malign anyone, least of all judges,’ is self-evident. But that is also a two way street, it must be said. Judges have the heavy onus of upholding the integrity of the institution in which they serve, which is a collective duty to the public and trumps the personal interests of individuals as it may be. Failings thereto have greater consequences than in other circumstances as the collapse of public confidence in the judiciary leads to rejection of the very basis on which a society governed by law, functions. That ‘onslaught’ that must be resisted therefore, is of racism, militarism, and political opportunism of politicians who subvert the Constitution, not the ‘onslaught of criticism’ that the President refers to.

Beware the resistance that will come

In fact, unjust and unfair criticism of the judiciary by the political opposition or their supporters that the President and his Minister is worried about, have no lasting currency in public debate. Hence, one does not have to call upon anyone, least of all judges to ‘fight’ such opinions. Indeed, it is the judicial Centre that must hold when everything else falls at the ‘political onslaught’ of ambitious men. We see this elsewhere in the world when, despite being harangued, vilified and persecuted by the mercifully outgoing President of ‘these Divided States’, judges stood firm in their affirmations of a free and fair election.

To have done otherwise would have brought chaos to the streets. Even as the President’s lawyers sought to shout their way in court alleging electoral fraud without any evidence, they were dealt with firmly, fairly and resolutely. This is what distinguishes failed or failing States from democratic (albeit deeply divided) societies in the global North as well as the South. Sri Lanka must make up its mind as to what category it wishes to belong to, judges, citizens alike.

In that regard, irrelevant nonsense of Ministers (of Justice or otherwise) in scoring own goals by trying to ‘protect’ the judiciary may be treated with the rich contempt that it deserves.