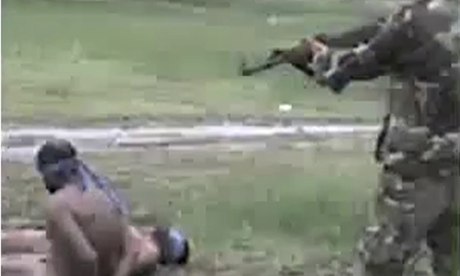 Callum Macrae
The reaction of the people I met in Sri Lanka is at odds with the intimidation against me engineered by a despotic government
A film shot in January 2009 allegedly shows a Sri Lankan soldier executing a Tamil Tiger prisoner. Photograph: Journalists For Democracy/AFP/Getty Images
They haunt our every move, on their motorbikes in their silver hatchback and on their tuk tuks. Sri Lanka’s intelligence officers are a tenacious lot, but there’s another group perhaps even more tenacious in their pursuit of us: “spontaneous”, pro-government demonstrators.

They were there when the Channel 4 news team and I arrived at the airport. They turned up outside our hotel that night – and when we set off by train to travel north to the former war zone, there they were again. There were a few hundred of them with hurriedly written posters, denouncing us as Tamil
Tiger supporters. They blockaded our train and eventually forced us to return to Colombo.
So here’s the issue. There are two versions of the situation in the traumatised north-east of the island, where perhaps 40,000 or even more, innocent Tamil civilians died in the horrific last few months of Sri Lanka’s civil war that lasted a quarter of a century.

The government and its supporters say the place is transformed: there are new roads, they say, new schools, former fighters “rehabilitated”, hotels being built and elections held.

But the Tamils who live there tell another story. They speak of continuing misery, of military occupation, of a climate of fear. A place where thousands remain homeless while army land-grabs continue unabated. Where thousands are still missing – and many women who remain are subject to the systematic use of sexual violence as a weapon of repression.

Of course, the way for journalists to get to the truth is to go there and see for themselves. But despite assurances from the president himself that we would be free to travel, it was not to be; several hundred noisy government supporters made sure of that.

That’s the problem for those who would try to hide the truth. If you want to work out which side is telling lies, you just have to work out who is trying to stop you seeing things with your own eyes. Here’s a clue: it wasn’t the Tamils.

This meeting of the Commonwealth heads of government is rapidly turning into a PR catastrophe for both the government of Sri Lanka and the Commonwealth itself. The extraordinary prospect of a Commonwealth committed to core principles of democracy, human rights and freedom of expression being hosted by a government which routinely flouts every one of those values is bad enough. But if this same government is also made the subject of a call by the UN Human Rights Council for an international investigation into alleged war crimes and alleged crimes against humanity (as might well happen next March), then this could be terminal for the Commonwealth’s credibility.

For Sri Lanka’s president, what he hoped would be the golden chalice of the Commonwealth summit is rapidly changing into a poisoned one – and the problem is that Colombo’s supporters blame that process almost entirely on Channel 4. In particular, Channel 4 News and – with extra, added venom – me.

We were gratified when, in something of a first for international diplomacy, David Cameron tweeted last week that he’d watched my most recent film, No Fire Zone, broadcast two week ago, and that as a result he had serious questions to ask President Mahinda Rajapaksa about what happened. It was a significant and surprisingly straightforward pledge. The downside is that it didn’t make us any more popular.

Every night Sri Lankan television carries stories stating quite unequivocally that I am a Tiger supporter. These sentiments are echoed by government spokesmen who suggest I – and Channel 4 – are funded by the defunct Liberation Tigers of Tamil Eelam. The fact that we have accused the Tigers, too, of war crimes, of using suicide bombers and targeting civilians, counts for nothing. These wild denunciations are pretty unpleasant – and a direct act of incitement which has inevitably translated into a number of death threats. I am probably the most hated man in Sri Lanka at the moment. I am a celebrity and they want me out of here.

But look behind these threats and hysteria – beyond the front page banner headlines that read “End of the road for Callum Macrae” and you detect a different current underneath. It was Jonathan Miller of Channel 4 News who first noticed it. As a tuk tuk drove past, the passenger inside saw us and gave a furtive, discreet little thumbs-up. Then it happened again. And others, when no one is looking, came up and asked for a photograph with us.

It is very clear there are a lot of people in Sri Lanka who are very happy to see their increasingly despotic ruling family coming under pressure.
The Guardian