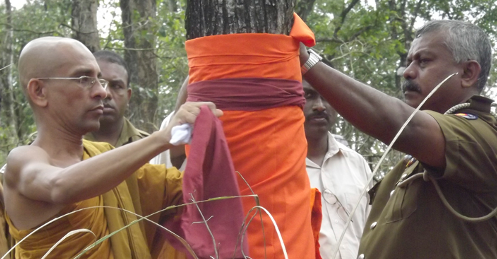 President Gotabaya Rajapaksa has appointed a Buddhist monk as a member of the Human Rights Commission of Sri Lanka.

This is the first time a Buddhist Monk has appointed to the HRCSL.

During Mahinda Rajapaksa presidency (2010-2015) a notorious monk was appointed to Police Commission.

HRCSL has been degraded by UN institute of national Human Rights Commissions mainly because its appointment process under the 20th Amendment to the constitution.

Ven. Kalupahana Piyarathana Thero is  member of the Governing Council of the National Peace Council headed by Dr. Jehan Perera.

Led by Dr. Jehan Perera a group of civil activists have started a dialogue with the Rajapaksa government. In it reports to UNHRC Sri Lanka government has cited this dialogue as its engagement with the civil society.

The monk has been nominated by President  Rajapaksa.

A senior official at the HRCSL has expressed concern that a Buddhist monk may be nominated to fill the vacant post of commissioner.

“The HRCSL needs people with experience and credibility to be appointed to it. There are many qualified and credible individuals with legal and human rights-related experience that can be appointed. If a religious leader is appointed to the commission, it may discredit this institution,” the HRSCL official hs told The Morning.

The post of HRCSL Chairperson became vacant following former Chair Dr. Jagath Balasuriya stepping down due to health reasons in November. Delays in appointing a replacement, amidst strong international scrutiny on the human rights situation in Sri Lanka, drew criticism and concern from many.

Parliament sources told The Morning earlier that the Opposition had proposed lawyers Gehan Gunatilleke and Nimalka Fernando for the vacant posts of HRCSL Chairperson and Commissioner.

(With the inputs from The Morning.)