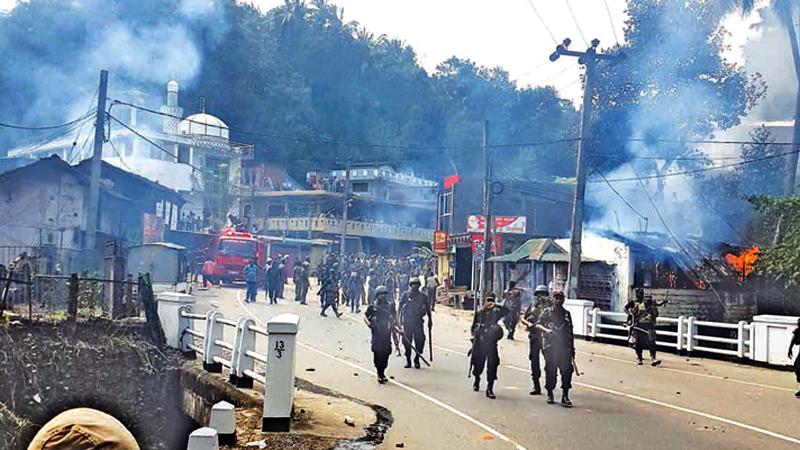 The recent Easter attacks targeting a number of churches and hotels devastated Sri Lanka. Over 250 people were killed, and many more injured. Within days of the attack, it emerged that the perpetrators of the attack were affiliated to radical Islamist groups in Sri Lanka. However, the identification of the perpetrators as ostensibly adherents of the Islamic faith opened the floodgates of discrimination and violence against the broader Muslim community in Sri Lanka.

Three weeks after the Easter attacks, mobs looted and burned mosques and madrasas as well as Muslim-owned homes and businesses in more than one district. Despite declaring curfews, the state was unable to prevent large scale violence against members of the Muslim community. Government actors conservatively estimate the damage in May 2019 to include the destruction of 14 mosques, 86 houses, and 96 shops.

Ethno-linguistic violence featuring the state and Tamil separatists has dominated the conflict landscape in Sri Lanka over the last half century. This article discusses a different angle in the complex milieu of ethno-nationalism and violence in the island. Although the Easter attacks were unprecedented, the reprisal violence targeting Muslims was not.

Similar patterns of violence were visible in the anti-Muslim attacks in the towns of Digana/Teldeniya in March 2018, Ampara in February 2018, Gintota in November 2017, and Aluthgama in June 2014.

While the trigger events tend to differ – such as traffic accidents, the alleged contamination of food, and terrorist attacks carried out by certain groups – the violent responses to such events are directed at the broader Muslim community. Widespread perception suggests that such violence targeting Muslims is a new, post-civil war phenomenon.

However, widespread violence against Muslims took place during the early twentieth century in Sri Lanka (known then as Ceylon). The anti-Muslim pogrom of 1915 marked the deadliest violence targeting the Muslim community to date. It spanned five provinces, and resulted in at least 25 deaths, four rapes, and attacks on over 4,000 Muslim properties. This episode, largely forgotten in public memory, remains the most devastating episode of violence against Muslims. Similar to the events mentioned above, the 1915 pogrom was sparked by a unique trigger. However, there are similarities in the underlying long-term causes of anti-Muslim violence in colonial and contemporary Sri Lanka that are worth highlighting. The 1915 anti-Muslim pogrom was a series of attacks carried out largely by members of the Sinhala-Buddhist population, against sections of the Muslim Moor population in Ceylon.

The Sinhala-Buddhist population, then as now, formed the majority of the island, whereas the Muslim Moor population at the time represented around 6.5% of the population. The Moors in Ceylon were formed of two groups: Ceylon Moors (5.7%), and Coast Moors (0.8%). Source: Postcard from circa 1905, Castle Hill Street and mosque, author’s collection The trigger event for the 1915 pogrom involved a Buddhist procession, an annual perahera that traditionally took a route past the Castle Hill Street mosque in Kandy.

A group of Coast Moors associated with the mosque relied on a colonial piece of legislation that ordered the silencing of musical instruments within 100 yards of any place of worship. They claimed that the noise from the Buddhist procession disturbed those worshiping in the mosque. A decision by the colonial police to divert the Buddhist procession away from the Castle Hill Street mosque in Kandy triggered the outbreak of violence.

The Sinhala-Buddhists saw this decision to shield the mosque from Buddhist ‘noise worship’ as the British giving preferential treatment to Muslims.

In the early hours of May 29, persons participating in the Buddhist procession attacked the mosque and its worshippers. Rather than remaining an isolated incident, this initial attack was followed by island-wide riots that grew in intensity and lasted nine days.

By the seventh day of rioting, the violence against the Muslim Moor community had spread across 165 miles. Although the death toll is lower compared to pogroms elsewhere in the world, the nature of the targets of the violence – namely Muslim-owned commercial establishments – suggest that Sinhala-Buddhist antagonism was directed primarily at symbols of Muslims’ economic livelihoods and success. Various explanations have been offered for the 1915 pogrom. The Governor of Ceylon at the time of the riots, Robert Chalmers, perhaps put it most succinctly as being a ‘combination of creed and purse.’

The most important factors underlying the violence were arguably economic and religious.

From the late nineteenth century, resentment against the Coast Moors, who competed against Sinhalese traders in urban areas, had been growing. Moreover, the First World War had contributed to rising prices of essential goods – the sale of which was largely controlled by Muslim traders. In this context, the Moors were perceived as profiteering during the war, by taking advantage of goods shortages.

Furthermore, divergent religious practices, such as the use of ‘noise worship’ by Buddhists during their processions, and the observance of silence during Muslim worship at mosques had brought Sinhala-Buddhists and Muslims into conflict since the early twentieth century. Therefore, the dispute on May 29, 1915 was not new but rather a continuation in a series of flashpoints over similar issues. However, British colonial policies on law and order also contributed to friction between Sinhala-Buddhists and Muslim Moors. In February 1915, the Supreme Court reversed the decision of a district court with respect to the right of another Buddhist perahera to go past the Ambagamuwa street mosque in Gampola.

By the time of the perahera in May 1915, the issue of the procession’s route had become a highly politicised one.

The colonial state failed to anticipate an escalation of tensions in May 1915 despite tensions emerging from the February 1915 verdict, which was perceived to favour the Muslim minority over the Sinhala-Buddhists.

This potent combination of economic and religious grievances reacted in May 1915 over the route of a Buddhist procession to produce large-scale violence targeting the broader Muslim Moor community.

In May 1915 as in May 2019, March 2018 and June 2014, the trigger event did not reflect the deeper underlying grievances between the Sinhala-Buddhists and the Muslim Moors. Violence in present-day Sri Lanka does not derive merely from post-war tensions nor is it necessarily a response to global, Islamist terrorism.

Thus, mechanisms for preventing future anti-Muslim violence would need to consider longer-term, and often deeply entrenched antagonisms between majority and minority communities, as opposed to focusing on surface-level symptoms.