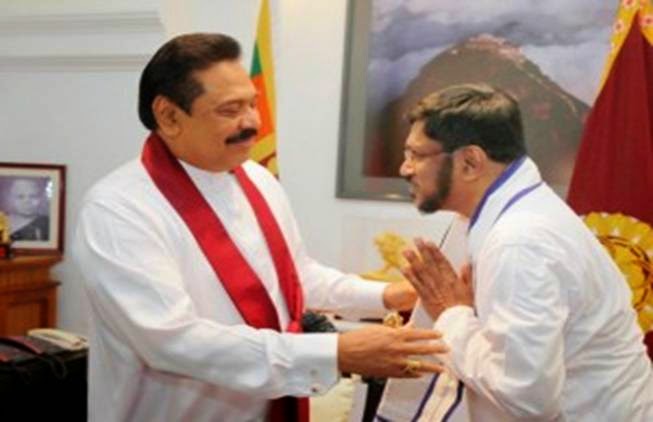 ( Thavarasa has been a strong Rajapaksa supporter)

By P.K.Balachandran.
COLOMBO: Ninety five percent of Tamils living in the Northern and Eastern Provinces of Sri Lanka, have asked for a federal constitution, says S.Thavarasa, a member of the government’s Public Representations Committee (PRC) which interviewed thousands of Lankans on what they would like to see in the new constitution that is to be drawn up soon.

Refuting the reported contention of PRC chairman Lal Wijenaike, that most Tamils did not seek federalism, Thavarasa said that he could produce documentary proof to show that the North-East Tamils demanded federalism.

“I have copies of all the submissions,” he told Express on Saturday.

Wijenaike had made the statement attributed to him at a hurriedly convened press conference on Friday.

It is suspected that government might have asked Wijenaike to say what he did in order to douse speculation among Lanka’s Sinhalese majority that the government may accede to the Tamils’ demand for federalism.

The basis of this fear is that the Tamil National Alliance (TNA), the largest Tamil party, is an ally of the government.

Fearing pressure from the TNA, Patali Champika Ranawka, a member of the Lankan cabinet and leader of the Sinhalese-rights party, Jathika Hela Urumaya (JHU), recently asked the Tamils to give up the demand for federalism if they want a solution to the ethnic conflict.

Like the JHU, other Sinhalese parties in the government may also be fearing that if the government gave in to the demand of the Tamils, the ruling coalition will suffer erosion of support among the majority Sinhalese. In that event, the Joint Opposition led by former President Mahinda Rajapaksa will be the gainer at the coming local bodies’ elections.

It is in view of the Sinhalese opposition to a federal constitution that S.Thavarasa’s party, the Eelam Peoples’ Democratic Party (EPDP), proposed to the PRC that a middle of the road solution may be sought if the Sinhalese parties give up their insistence on a Unitary constitution.

“The EPDP suggested that a middle of the road structure, which is neither fully federal nor fully unitary, could be worked out if there is agreement that the controversial terms ‘federal’ and ‘unitary’ are not used,” Thavarasa said.

He pointed out that there is a thirst for devolution in all Sri Lankan provinces and not just in the minorities‘ dominated Northern and Eastern Provinces.

“At a conference of Chief Ministers called by the Prime Minister on July 9, all the  six  Chief Ministers who attended sought devolution as decreed by the 13 th.Constitutional amendment including power over lands and the police,” Thavarasa said.