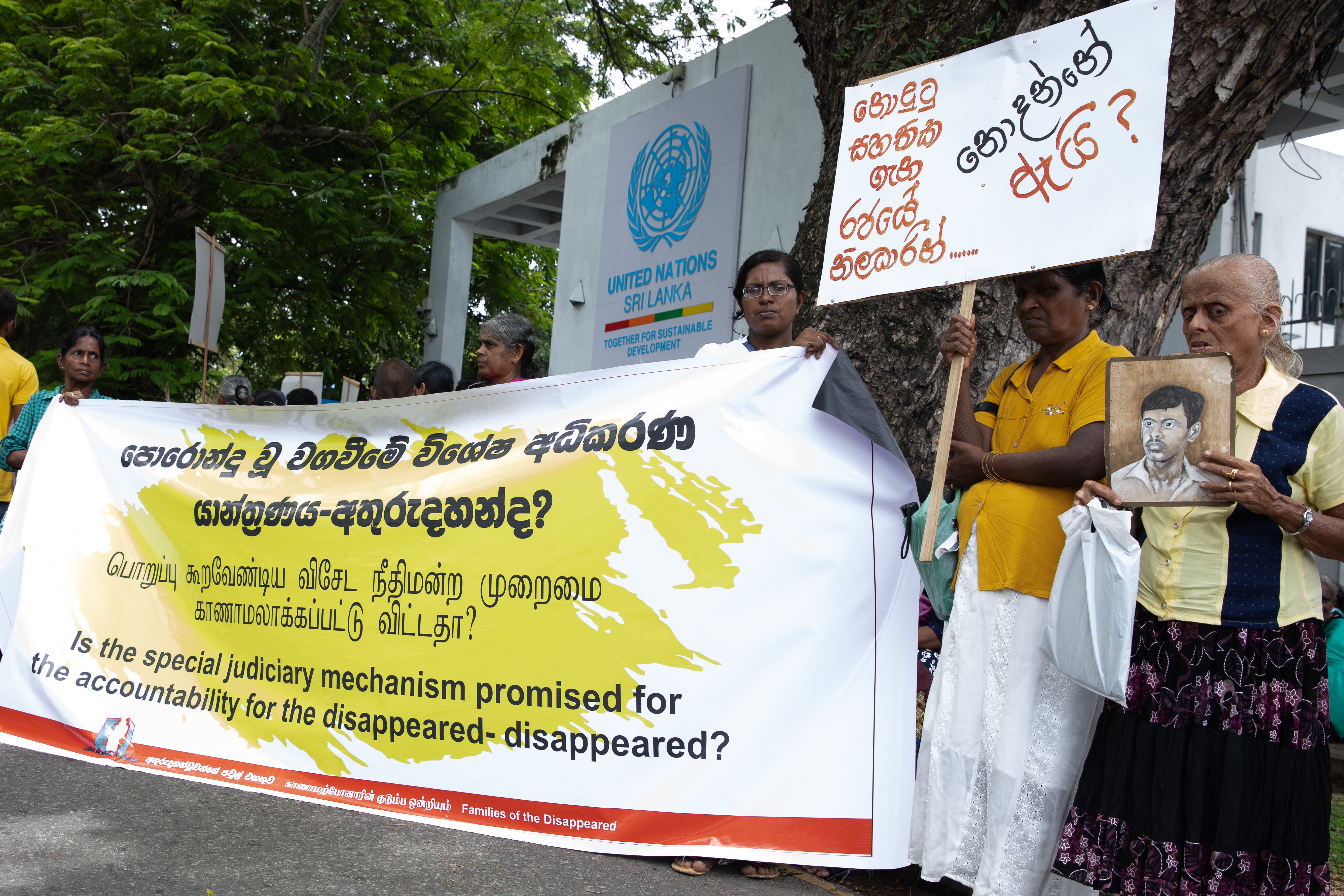 Image: Families of the disappeared gathered in front of UN, Colombo and handed over a memorandum. © Sunanda Deshapriya.

August 30 was the International Day of the Victims of Enforced Disappearances. Despite Government figures indicating more than 65,000 complaints of disappearances in Sri Lanka, for most Sri Lankans, most media and the Government, it was just another day.

The Office on Missing Persons (OMP), the state institution responsible for tracing the fate and the whereabouts of disappeared persons organized a discussion in Colombo. Families of the disappeared had written moving memories and placed photos of their loved ones at the event.

In the North and the East, Tamil families of the disappeared took to the streets. Many of them had been at roadside protests for more than 900 days, engaged in discussions with the OMP, the President, Ministers, other politicians and officials. There was one protest in Kalmunai in the East and another in Omanthai in the North. I joined the one in Omanthai with some friends from Colombo, including a Sinhalese and a Muslim, women whose husbands and sons had disappeared. The families told me they chose Omanthai for its significance – according to them, their relatives had disappeared on the last days of the war, after being taken away by the military.

At the OMP event in Colombo, Jeyatheepa Punniyamoorthy, a Tamil woman from Batticaloa and the only member of the OMP who had a family member disappeared, highlighted that state institutions didn’t realize what they (families) wanted, and that families of disappeared didn’t want pity, they just wanted answers.

At the Omanthai protest, frustration and lack of faith in state institutions, including the OMP, were strong, based on a history of engaging and not getting answers. This led to continued demands of international involvement. But the families were still willing to give the latest state institution a chance – they highlighted that they had presented details of five cases to the OMP last month and that their trust in the OMP would be based on how the OMP finds the truth about these, rather than the number of offices opened or reparations awarded. Some families still insist that they don’t feel the OMP is their office.

A year ago, the OMP issued some important recommendations. This year, its Chair admitted that there had been little progress in implementation. Even the disbursement of interim relief that they had recommended had not commenced. This is ominous, not just for the OMP, but also for the Office of Reparations. As a statuary institution mandated to take measures to protect the rights of victims, the OMP may have to adopt a more activist approach to have their recommendations implemented, and consider ways of intervening directly to support the initiatives of families in court cases, memorization, documentation and other agitations.

At the Omanthai protest, and even before, some family members shared their feelings that reparations may be used to sidestep truth and justice, and said they want justice, and not reparations. However, many families of the disappeared desperately need interim relief and reparations and it would be a pity to reject them that. Trading off one right over the other is something we should be careful about. OMP member Jeyatheepa had said the interim relief (Rs. 6,000 per month) recommended by the OMP is not something to deter families from finding the truth. In my experience, such assistance could strengthen the family’s struggles such as protests, court cases, and international advocacy and make them less dependent on donors, NGOs, churches, diaspora, etc.

The dark shadow of the military hangs over the efforts to address disappearances in Sri Lanka. In the last few years, Army and Navy personnel have been arrested in relation to the disappearance of a journalist and some youth. In the more distant past, the Sri Lankan courts have determined the military to be responsible for disappearances and even convicted some. A special committee of the Human Rights Commission has found evidence of disappeared persons having been taken into custody by the army and no evidence of them being released or detained elsewhere or that they are alive. I have also heard crying family members narrate compelling stories of how their loved ones had disappeared after being taken away by the military or were last seen at military camps. And now, we have a former soldier and defence secretary as a presidential candidate who is widely believed to be behind disappearances. We have a Chief of Defence Staff who had been arrested after being accused of harbouring a suspect and threatening a witness in a pending court case related to disappearances. And an Army Commander who is implicated in disappearances of hundreds after surrendering.

The Omanthai protest had a banner with 52 photos of family members that had passed away while searching for truth. The gruelling days at roadside protests, braving intimidation, the sun, the rain and dust, with meagre meals and facilities would have had to bear a heavy physical and emotional cost, who had barely survived the war.

Many others are ailing – how many of them would pass away without knowing what happened to their disappeared family members? Despite the strict legal prohibitions and immensely political nature of disappearances, it’s the deeply personal nature of the tragedy and struggles that must be central to the discourse on disappearances. The struggles of the 52 who had passed away and others continuing must not be in vain and they need more support from all Sri Lankans and people of goodwill.