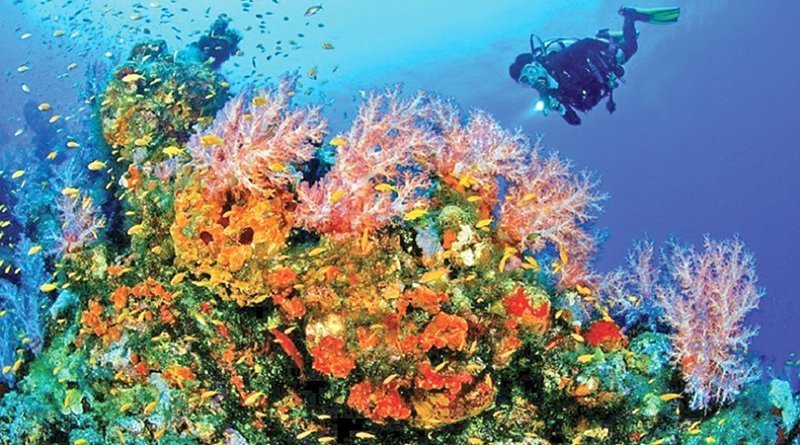 Marine Environment Protection Authority (MEPA) General Manager Dr. Terney Pradeep Kumara said Sri Lanka’s corals are faced with an imminent threat of destruction due to climate change, pollution and illegal fishing methods. Observing that 90 percent of corals in Sri Lankan waters are already dead, he warned that the remaining 10 percent would also be lost in another 10 years.

“Sri Lankans will lose the luxury of viewing colourful corals 10 years from now if urgent steps are not taken to stop their current rate of destruction,” he said.He was speaking at a media workshop on ‘Conservation of Corals and Marine Environment’ organized by the MEPA in Trincomalee parallel to World Ocean Day which fell on June 8.

“The percentage of live corals in Hikkaduwa is about 7 percent. The Bar reef in Kalpitiya has suffered a severe coral bleaching event. In shallow waters down South, you can only see coral rubble now. Illegal fishing methods such as dynamiting have destroyed corals in Silavathura. Some patches of corals still remain in the Eastern waters such as in Pigeon Islands in Trincomalee, the newly gazetted Kayankerni Marine Sanctuary and Pasikuda. The pressure on these corals is also very high due to human activities such as tourism, discharge of industrial effluent, agriculture, aquaculture, discharge of municipal sewerage and squatter settlements. We need a collective national effort to protect the remaining live coral patches,” he explained.

Avoid plastic packaging as much as possible. In beach clean-up campaigns we regularly collect a large number of plastic straws and plastic water bottles. Tons of plastic waste ends up in the ocean every year and the trash stays there infecting, damaging, and killing coral reefs. Plastic waste entangle in corals. This poses a severe threat to marine bio-diversity. Coral reefs provide homes and nursery grounds to many fish species,” he said.

The General Manager also pointed out that though the use of all forms of polythene, polypropylene and polyethylene for decorative purposes has been banned by law, such decorations are still prevalent in the country.

“For example, Vesak lanterns made of or covered with plastic wrappings were seen everywhere,” he remarked.

He said that the MEPA on its own initiative handed over a policy guideline to minimize marine pollution from the fisheries industry to the relevant authorities. He also stressed the need to declare more Marine Protection Areas to control excessive fishing. He warned that the fishing industry will fall into trouble in the near future if such measures were not adhered to. “We may even lose wild catch fisheries if the current rate of fishing continues,” he remarked.

He also highlighted that even though Sri Lanka banned two-stroke engines in three wheels several years ago, two-stroke boat engines are still widely being used and that they cause no less pollution. “There is not even a discussion to ban two stroke boat engines. Their emissions cause marine pollution,” he added.

Responding to a question by a journalist as to why the MEPA does not take stringent legal action against the offenders of marine polluters, the General Manager cited lack of legal provisions for the MEPA to act in many instances. “The role of MEPA is preventing marine pollution. We can act on instances such as oil spills, chemical spills and ship accidents etc, but when it comes to taking legal action against instances such as discharge of effluent to the sea we have no authority. Also our purview is limited to a few Km stretch of sea and land,” he responded.

MEPA Chairman Rear Admiral Rohana Perera speaking at the workshop said that the MEPA signed an agreement with the Samurdhi Development Department to get the participation of Samurdhi beneficiaries for daily coastal cleanup campaigns.

He said Samurdhi beneficiaries who are willing to join in the programme, would be assigned a stretch of one kilometre and would be paid Rs 100 per hour. “They have been asked to attend to beach cleanup twice a day one hour in the morning and one hour in the evening. Likewise, they can earn about Rs 6,000 supplementary income per month. This amount is more than the monthly Samurdhi allowance.

A private company has come forward to sponsor the programme and bear the cost of payments to the participants. We invite other private companies too to join in. About 110 Samurdhi beneficiaries are currently registered with the programme,” he said.