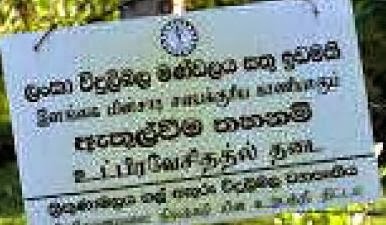 Meera SrinivasanA white, rectangular board with Sinhala and Tamil letters appears once every few metres along the iron fence around a huge expanse of land in the sea-facing town.
‘Ilangai Minsara Sabaikkuriya Kaaniyaagum. Utpravesithal thadai’ [This land belongs to the Ceylon Electricity Board. Entry is banned] reads the board. This is where a 500-MW capacity, coal-fired power plant will come up in a few years from now in a joint project between Sri Lanka and India.

For India, the project is a feather in its cap. It is the National Thermal Power Corporation’s (NTPC) first international joint venture, through the Trincomalee Power Company Limited (TPCL) where it holds 50:50 stakes with the Ceylon Electricity Board (CEB).

For Sri Lanka — which currently consumes 2000 MW of power a day — the 2X250 MW-capacity plant bears promise of meeting the shortfall in its power requirement.

For about 800 families in the area though — primarily Tamils — the project, indirectly, has spelt misery. “The misery of living like refugees in your own place,” as Bagyarathinam Yogeswari put it. She is among those who lost their land due to the upcoming plant. The case of Sampur illustrates the problematic issue of control over land in Sri Lanka’s devolution debate.

The territory earmarked for the plant itself — spanning 500 acres — is nowhere near her home. “It is actually coming up a little far away from my land, but still they [Sri Lankan government] have taken over land owned by many of us. They say it is for the plant,” she says.

The acquisition has triggered protests in the area. 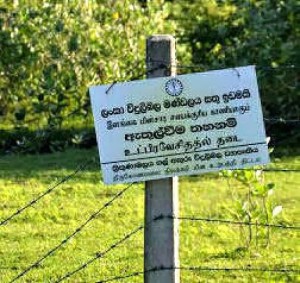 During the final phase of the war, thousands living in and around Sampur were displaced to neighbouring Batticaloa district.

They returned at the end of the war and now find that their land has been aquired. Some remain in welfare camps while others have been resettled in three villages.

CEB Chairman W.B. Ganegala told The Hindu that the power plant needed only 500 acres and that the Board had not acquired more than this. Only seven families were displaced when this land was acquired and they have been given alternative homes nearby, he said. But locals say an additional 1,000 acres have been taken over by the Sri Lankan government for a private company.

The acquisition of an additional 1,000 acres the Sri Lankan government in the name of the Ceylon Electricity Board-National Thermal Power Corporation joint power project has triggered protests in the area.

A lawyer who has taken up the case of the displaced people says the acquisition is for a private company backed by the Sri Lanka Board of Investment that is coming up in the special economic zone here that was gazetted in 2006.

“The additional land has been acquired for a company called Gateway that is said to be owned by a close relative of the President,” says Tamil National Alliance parliamentarian and lawyer M.A. Sumanthiran who is appearing on behalf of 219 of 800 families displaced from the land.

The case will be heard again on December 20.

M.M. Nayeemudeen, Additional Secretary, Ministry of Resettlement says the Ministry was trying to negotiate with the BOI for land to resettle at least some of the former occupants.

Residents are hoping that an Indian Housing Scheme for war affected people in Sampur said to be seriously considered by New Delhi may provide some relief to them.

TNA leader and veteran parliamentarian R. Sampanthan — who is from Trincomalee — says despite Economic Development Minister Basil Rajapaksa’s assurance to the parliament that the issue will be addressed, no concrete steps have been taken.

In October 2011 Economic Development Minister Basil Rajapaksa told Parliament that “[a]ny land which is not necessary and which will not be acquired for the construction of the power plant will be given back to these people and they will be resettled.”

Over two years later, the people of Sampur are still waiting to get back to their land. Residents are hoping that an Indian Housing Scheme for war affected people in Sampur being seriously considered by New Delhi may provide some relief to them.
THE HINDU