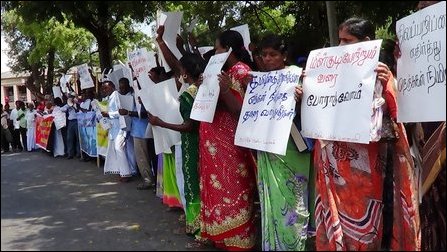 M.A.Sumanthiran M.P
Last week saw a hugely dangerous move by the government. Section 2 notices under the Land Acquisition Act were pasted on trees in Valikamam North in the Jaffna Peninsula indicating that an extent of approximately 6,400 acres of private lands belonging to several thousand Tamil people would be acquired for Military cantonments.

Strangley, the notice says that the claimants are not traceable! The owners of these lands live just outside the so called illegal High Security Zone, in camps maintained by the government itself. They have lived there for over 25 years. And although their title to these lands were checked and cleared by a Committee appointed by the Supreme Court in 2006, they were not permitted to go and resettle on the false assertion that de-mining was not complete.

That it is false is demonstrated by the sight of soldiers cultivating these lands from which the owners were kept away. Now suddenly, the government has shown its true face: these lands will be taken and given to others to occupy, who will become voters in the North. Similar notices have been issued in the Kilinochchi Distrct also. In the Eastern Province, instructions have gone out to acquire all the land that the military deems necessary for its purposes.

Issues relating to land have always been at the centre of the national question. In the past, misuse of land powers by the state resulted in violence and the worsening of ethnic relations between communities. Despite having ‘won the war’ however, the Sri Lankan government seems to be reluctant to learn lessons from this history in order to win the peace.

Alarmingly, the history of land grabs seems to be repeating itself. People of the North and East, who according to the government were rescued by the military in a ‘humanitarian operation’ find their lands and with it their livelihoods, way of life, and birthright snatched from them by the selfsame military.

The issue of land grabs by the military in the North and East is one that that has been continuously raised by the Tamil National Alliance from as far back as 2009, soon after the end of the war. I myself have raised the issue repeatedly, including in status reports I tabled in Parliament in July 2011 and October 2011. However, no efforts have been made to address the issue, and such land grabs have continued unabated to date.

In 2006, the Supreme Court of Sri Lanka decreed in an order that displaced people should be resettled. Further, President Mahinda Rajapaksa undertook to resettle all those displaced by the war by the end of 2009, in his joint communique with the UN Secretary General Ban Ki Moon on 26th May 2009. Subsequent to this, several other cases have also been filed in the Supreme Court challenging the military occupation of land in both the North and the East. All of this however, has done nothing to arrest such land grabs.

Recent weeks have seen a steep rise in the number of land grabs in the North and East. Last week the Tamil National Alliance announced its intention of launching continuous protests against the military’s acquisition of lands in the North. Protests were staged last week organised by the TNPF against these land grabs. In addition to protests, the Tamil National Alliance has also announced its intention of taking legal action to challenge such ‘acquisition’ of private land by the military.

Such land grabs have taken place in various places in the North including Jaffna, Mullaitivu, Mannar, Vavuniya and Killinochchi. Military personnel in the North are now putting up notices on the lands that they intend to ‘acquire’. Most of this land belongs to private individuals, who hold valid deeds granting them legal ownership of the lands in question. Other incidents of land acquisition by the military, Buddhist monks and Sinhala civil officials also took place in the East in recent weeks. The acquisition of such a vast amount of private properties is said to be for ‘military purposes’. The need for the military to acquire such vast amounts of land is unknown.

One of the recommendations of the Lessons Learnt and Reconciliation Commission, which was appointed by President Mahinda Rajapaksa in 2010 was to release the private land being used for ‘security purposes’ at the time. Another recommendation was that the government disengage security Forces from all civil administration related activities as rapidly as possible. The Tamil National Alliance welcomed these, among several other recommendations, on the release of the Report. Instead of implementing the positive recommendations of the report such as this one however, the government is now permitting the military to take acquire even more private land belonging to people who, for several generations, have lived in these lands.

Such vast amounts of land being taken over for the military, for no known reasons, gives rise to serious concerns of colonization. The Tamil National Alliance has always made it very clear that peoples of all communities are most welcome in the North and East. The phenomenon of colonization, however, is the process by which deliberate attempts are made to alter the demography of a particular area. This has been raised as a serious concern by the Tamil National Alliance since the end of the war in 2009. Such concerns are confirmed by reports of various streets and villages in the North and East with Tamil names being renamed and given Sinhala names.

Another serious concern the Tamil National Alliance has consistently raised from 2009 is the destruction of numerous Hindu places of worship and the proliferation of new Buddhist shrines. The government and the military are relentlessly engaged in transforming the cultural, linguistic and religious makeup of the North and East and forcibly imposing the dominant culture on those areas. Land grabs and subsequent colonization are clearly attempts to alter the ethnic demography of the North and the East. Such attempts are clearly meant to undermine the political influence of the Tamil people. This concern is made even more serious with the Northern Provincial Council Elections scheduled for September this year. President Mahinda Rajapaksa’s claim following the end of the war that ‘there will be no minorities’ takes on new meaning in this context.

The Tamil National Alliance has repeatedly raised the serious implications of such policies and actions on reconciliation. The government declares that it has ended the war and has now ushered in an era of peace and reconciliation. However, as I have repeatedly stated in both this column and elsewhere, reconciliation will not come when people are shut out of the homes and land that belong to them. For true reconciliation the trust and amity that has been lost between communities must be rebuilt.

Reconciliation will not come if the Tamil people in the North and East see those of other communities take over their land and their livelihoods while they languish with no roof over their heads. This can only push reconciliation further away.

These land grabs by the military, together with activities relating to colonization of the North and East are part of the attacks on the democratic rights of the Tamil People in the North and East. These attacks are clearly carried out with the active support, sanction and collusion of the Sri Lankan government. They are part of the many vain and counterproductive attempts to suppress and persecute Tamils for their political aspirations.

The Tamil National Alliance has called on the Sri Lankan government to immediately cease these acts of violence directed against the Tamil People. In order to prevent a non-recurrence of the past, Sri Lanka must expeditiously commence a meaningful and genuine process of reconciliation. Land grabs and colonization will only hinder such a process.
Courtesy – des.com