64% of professionals are women in Sri Lanka 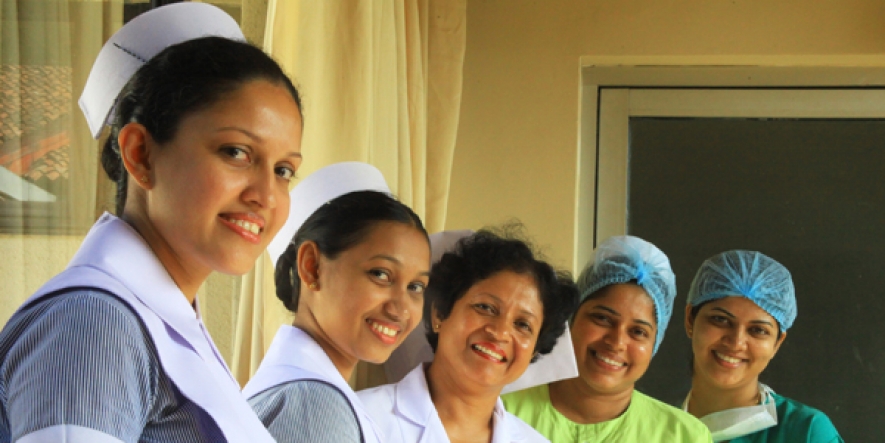 Though Sri Lanka has a poor women’s labour force participation rate (LFPR), women comprised a massive 63. 65 per cent of all professionals, and men, a miserly 36.35 per cent, Census and Statistics Department’s (CSD’s) second quarter (2Q) 2016 Labour Survey report showed. Nonetheless, as at end 2015, this number for women was still higher, with 65.8 per cent of all employed professionals in Sri Lanka comprised of women, the CSD said.

Nevertheless, on a ratio basis, women at end 2Q 2016 still led the way, with women comprising 63.65 per cent of all professionals, and men, a miserly 36.35 per cent, as at the end of that period.

But that appears to be the only silver lining as far as women in employment in the country is concerned, because, on an overall basis, women participation in employment, in Sri Lanka, is low.
This, however, doesn’t take into account the large numbers of the island’s women, working abroad, mainly as housemaids.

‘An estimated 1.7 million Sri Lankans are employed abroad impacting nearly 25 per cent of our population. A total of 300,413 (63.22 per cent of males and 36.78 per cent females) left for employment in 2014,’ the Foreign Employment Bureau on its website said.

But, as an official from the CSD told this reporter, though women employed abroad are not taken into account in the CSD labour survey, from a statistical perspective, as both of those numbers add up on the numerator and the denominator, they cancel out.

Meanwhile, despite the fact that there was a greater number of women in the country, the majority of the female population (15 years and above), was in the economically inactive group (64.1 per cent). Whereas those women (15 years and above) who were in the economically active group was a mere 35.9 per cent, the CSD’s 2015 year end data showed. By the 2Q of 2016 this number had come down to 35.1 per cent.

Sri Lanka is a multiethnic, multilingual and multi-religious society that believes and practises the equality of sexes. Nonetheless, despite the fact that the majority of its population is women, ‘women in employment’ on the whole is low, in comparison to their male counterparts.

Considering the economic status by gender, majority of the female population in the island is in the economically inactive group (64.1 per cent); whereas in the case of males it was a mere 25.3 per cent by end 2015.

In related developments, ‘youth unemployment’ (those between the ages of 15-24 years) as a proportion of total unemployment by gender and level of education stood at a high of 61.6 per cent for men, by end 2015, whereas in the case of women, it was a comparatively low percentage figure of 45 per cent, CSD data showed. These details as at end 2Q of 2016 were not immediately available.

CSD defines ‘labour force’ as the current, economically active population who are 15 years of age and over. This number as at end last year (2015) stood at 8,214,473 (2Q of 2016: Down to 8,193,266).
CSD defines ‘unemployed persons’ as those who are available and/or looking for work, but who did not work, though having had taken steps to find a job during last four weeks and are ready to accept a job given a work opportunity within the next two weeks.

Meanwhile, ‘male unemployment’ stood at a relatively low figure of 3 per cent as at end 2015. But by end 2Q 2016 it had increased to 3.1 per cent, whereas, female unemployment during this period stood at 7.3 per cent.

The main reason reported, for the majority among females (64.1 per cent) to be economically inactive is because of their involvement in housework activities, CSD said.

In related developments, those in the labour force (both sexes) comprised 8.21 million last year, said CSD. The CSD refers to the ‘labour force’ as: All persons who are/were employed or unemployed during the reference period of the survey (the reference period is the ‘previous one week’). They include all persons who worked or were available/looking for work during the reference period. Of this number, males comprised a gigantic figure of 5.26 million or 63.98 per cent of that segment of the population and women, a poor 2.96 million (36.02 per cent) of that segment of the population.
The ‘excuse’ given for this poor participation of women in the labour force is due to their ‘responsibility’ towards household chores, CSD said.

But by contrast in Malaysia, which may be considered as the island’s closest peer as far as the Asian region is concerned, in the sense both countries have open economies; they are also multilingual, multiracial and multi religious countries (though Malaysia can be construed as being more conservative than Sri Lanka because of its Muslim background as far as women are concerned), both countries were also former British colonies and both countries, area wise and population wise may be considered as being somewhat comparable, despite the fact that Malaysia is bigger than Sri Lanka in both of those instances, but not by wide margins, relatively speaking.

Therefore, to compare women in employment vis-à-vis its peers, one example that may be taken for this purpose may be Malaysia. Both countries practise open economies. According to Malaysia’s official statistics as found on the web, its population as at last year (2015) end was 31.2 million.
However, it was not immediately possible to get the composition of the sex’s, with respect to Malaysia’s population of the year 2015.

Nonetheless, Malaysia’s official statistics have given estimates, of the breakdown in sexes as at the current year (2016).

The website of Malaysia’s Statistics Department estimated that the country’s population by this year (2016) end will have had been 31.7 million. Of this number, men will have had comprised 16.4 million (51.7 per cent) of the total population and women, 15.3 million (48.3 per cent).

Meanwhile, the LFPR, says the total number of the economically active population as a percentage of the total working age population among women in Malaysia was a high of 54.1 per cent last year (2015), Malaysia’s Statistics Department (MSD) said, compared to a mere LFPR of 35.9 per cent among women in Sri Lanka in the same period.

Malaysia however, defines its working age population as those between 15 to 64 years of age, whereas in Sri Lanka it’s all those who are 15 years and over, ipso facto, no upper age limit being fixed, as far as the employable population was concerned.

These compare with a low, overall LFPR of 53.8 per cent in Sri Lanka and an even low LFPR for women in the island at 35.9 per cent.

The top three sectors that attract ‘women in employment’ in Malaysia are the wholesale and retail trade, manufacturing and the education sectors, its Institute of Labour Market Information & Analysis (ILMIA), which functions under Malaysia’s Human Resources Ministry said.

CSD, said of the women employed in Sri Lanka, 24.3 per cent were in elementary occupation; skilled agricultural, forestry and fishery workers (18 per cent) and craft related trades workers (15.8 per cent).

Part of the reason why Malaysia has a high LFPR may be due to the fact that Malaysia’s informal sector is relatively small compared to that of Sri Lanka’s.

In 2015, 11.4 per cent of non agricultural employment was in the informal sector comprising 1.4 million persons, MSD said.

Informal sector employment among men comprised 63. 4 per cent (3.22 million) of this sex’s total employment figure (5.1 million) as at last year (2015) in this country.

Though it was not possible to get the data with reference to those employed, sector wise, in Malaysia as at last year (2015), the figures for 2014 were, however, available.

In contrast, in Sri Lanka, a high number of those employed were in the Agriculture Sector, occupying a space of 28.7 per cent. Those in the Industries Sector comprised 25.8 per cent and Services (45.6 per cent).

But by the end of the 2Q of 2016, the Agriculture percentage had come down to 25.1 per cent, whereas those employed in the Industries Sector increased to 27.1 per cent and the Services Sector (47.8 per cent).

The unemployment rate among the ‘high educated’ group (G.C.E (A/L) and above) is reported to be 9.2 per cent. The gender split in this connection is 4.7 per cent for men and a high of 13.5 per cent for women, respectively.

This reveals that the problem of unemployment is more acute in the case of educated females than males.
Ceylon Today