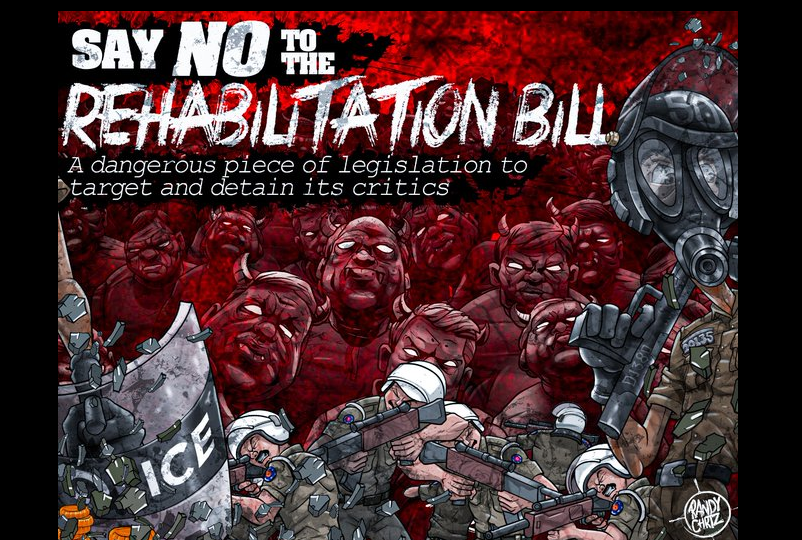 Harm Reduction International, the International Drug Policy Consortium, and Amnesty International urge Members of Parliament in Sri Lanka to take a strong stance against the Bureau of Rehabilitation Bill, which the government is scheduled to present again with amendments in Parliament this Wednesday 18th January.

Sri Lanka’s approach to drug control and treatment has been under the spotlight of experts and international entities for several years, as evidenced by the concern raised by the UN High Commissioner for Human Rights in her report presented at the 51st Session of the Human Rights Council (12 September – 7 October 2022). Among the critical aspects raised are the heavy engagement of the military in drug law enforcement and rehabilitation, violence in drug rehabilitation centres, and the use of death penalty for drug offences.

Regrettably, instead of taking steps to better align national policies to its international human rights and drug control obligations, the Government of Sri Lanka is proposing to strengthen its already punitive approach to drugs through attempts to enact new laws that would evidently contravene international law; including the Bureau of Rehabilitation Bill, which would further enable the heavy involvement of armed forces in drug treatment. Most troubling is the fact the proposed law would facilitate acts of torture and other ill-treatment treatment in rehabilitation centres by permitting the use of force beyond what is legitimate under international standards and by formally allowing military involvement in running of such centres. Moreover, in contravention of the right to health, the proposed law would make rehabilitation compulsory despite evidence that suggest not only that it is ineffective but abusive.

The proposed law allows the President to issue a gazette designating members of the armed forces to ‘exercise, perform and discharge the powers, duties and functions’ of the law – which formalises and legalises the involvement of the armed forces in drug treatment and rehabilitation. Moreover, it will open the door to torture and other ill-treatment by empowering staff of the centres to use force to ensure persons “carry out orders.” This violent approach can result in serious injury or death of those detained in the centres, as confirmed by what happened just six months ago in Kandakadu Rehabilitation Centre, but is also ineffective, as illustrated by evidence globally, as well as in Sri Lanka.

Further, the Bill in its last form perpetuates the practice of compulsory rehabilitation for people who use drugs, falsely dubbing it as a solution to prison overcrowding and a more humane approach than imprisonment. The current Bill does not specify the manner in which persons without their consent will be sent to drug rehabilitation. This means that Drug Dependant Persons (Treatment and Rehabilitation) Act (No. 54 of 2007) will be the likely means through which persons will be sent to compulsory
drug rehabilitation through judicial order. Evidence shows that compulsory rehabilitation is not only ineffective and counter-productive but also leads to quicker relapse. Equally important, it violates the fundamental rights of liberty, bodily authority, and health. This has been reiterated by 12 UN Agencies, which have called for the immediate closure of all compulsory drug rehabilitation facilities.

Moreover, coercive treatment is proven to have negative health outcomes and run counter to established public health evidence. Data from the United Nations Office on Drugs and Crime (UNODC) shows that the punitive response to drug use has failed to reduce drug related harm, and recognition of this failure is growing globally. On the contrary, laws need to ensure that people who use drugs have access to quality, evidence-based and human rights-centred health services which are voluntary and community-based.

As the government of Sri Lanka presents the Bill again in Parliament tomorrow, we urge you to take a strong position against it. Passing a law that could further steer the country away from adhering to international human rights and drug policy standards would pave the way for further human rights violations and put at risk the life and health of people who use drugs. Moreover, passing this law would undermine Sri Lanka’s position at the international level, and its relations with international development partners who are deeply concerned about the human rights situation in the country; while clearly failing to address drug use and drug-related harms faced by people in Sri Lanka. 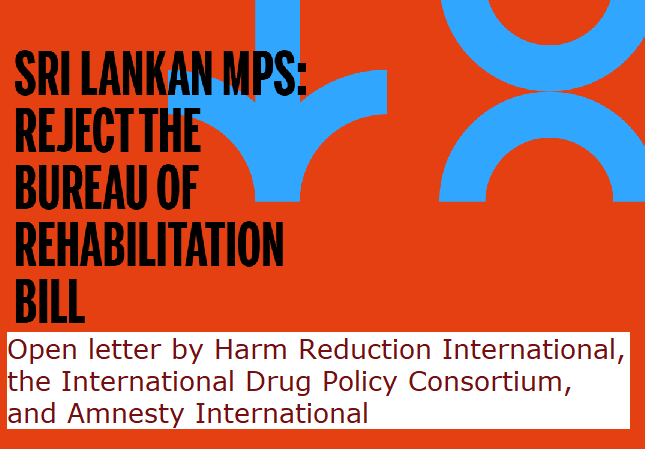