Sri Lanka’s Uprising: What led to the recent protests. 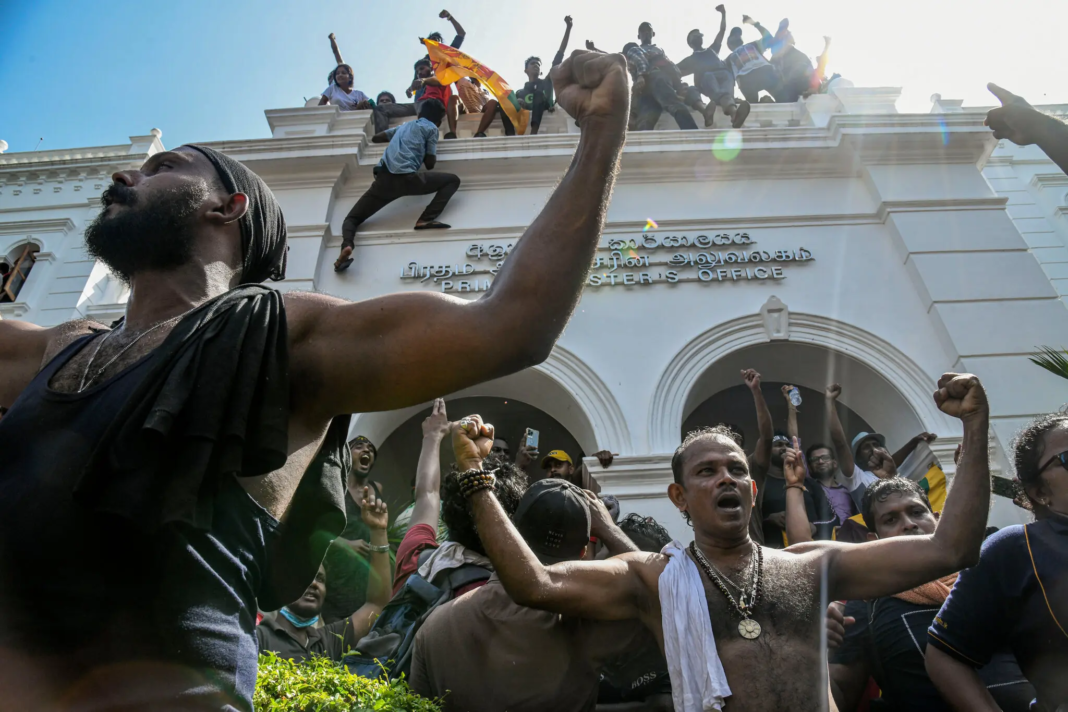 Sri Lanka’s recent upheaval offers an extreme example of the world’s recent problems. Covid disrupted the country’s major industries, particularly tourism, and then leaders failed to adapt — setting off a chain of economic calamities, including food and fuel shortages. The crisis prompted protests, culminating in the president’s resignation and the installation of a new president on Wednesday.

My colleague Emily Schmall has been reporting on Sri Lanka. I spoke to her about the country’s crisis.

What led Sri Lanka to this point?

For the past six months or so, economic conditions for everyday Sri Lankans have grown increasingly difficult. Things like fuel and cooking gas became increasingly expensive and hard to find, and inflation soared. New government import bans meant goods from overseas like chocolate and coffee beans disappeared.

In Sri Lanka, there’s a sizable middle class. People are not used to scarcity, so they noticed immediately when things started disappearing from shelves. People were upset about that. And the ability to carry on became all but impossible in the last month or so.

Eventually, protesters took over the presidential palace. How did that happen?

It began with the protesters marching toward the president’s mansion on July 9. Government officials tear-gassed them and fired live rounds around them. This infuriated people. A few commandeered a military truck and used it to break down the gate. Hundreds of people then flooded in and found this place essentially abandoned — the president had fled, and there was nobody stopping them from going inside. Then, they did the same at Temple Trees, the prime minister’s official residence.

But the protesters didn’t ransack the place. They started inviting the public to come in, but in an orderly fashion. Activists were forcing people to queue properly. They treated these homes like museums. They were concerned about not damaging any property.

After about 24 hours, a gleefulness overtook the place, and some people swam in the president’s pool. They’d done it: They had forced this extremely powerful president — who was accused of war crimes, who was feared — to leave his own home and even the country. But they did it peacefully, without taking up arms.

So it was an atmosphere of joy and disbelief, with a bit of absurdity and a bit of comedy thrown in — a very Sri Lankan sort of revolution, relatively low-key and polite.

I can’t help but compare this to the insurrection at the U.S. Capitol. This seemed much more peaceful.

Oh, yeah. I couldn’t help thinking of it either.

There were several differences. For one, these people were not armed. It was also a bit spontaneous, and there was no clear leader. They did not do it in association with any politician or political party.

But the big difference was that these protesters had widespread support. Ordinary Sri Lankans were applauding them and even participating. People who would otherwise never be involved in activism or protests were happily wandering around the properties, enjoying themselves and basking in the success of this movement.

In the U.S., we’ve had inflation and supply shortages recently. But this sounds like a whole different level of problems.

Yes. So in the U.S., Americans have complained about fuel prices. By contrast, Sri Lanka ran out of fuel. It’s not just that it was expensive; it was impossible to find.

How did the government react?

Until several months in, there was really no government recognition of the crisis. The dynast Gotabaya Rajapaksa was leading the administration at the time, and he had appointed his brothers and his nephew to his cabinet. He didn’t take a lot of counsel from outside his family.

There was a lot of denialism among them. They were told repeatedly that the economy was deteriorating. But they were certain tourism would continue to increase after Covid and that would be enough to shore up finances. But that didn’t happen; tourism was starting to come back, but it wasn’t enough.

I was surprised that so much of the country was run by this one family. Is that unusual in Sri Lankan history?

It was strange even for Sri Lanka.

There are a number of families in politics. Rajapaksa was defense secretary when his brother was president from 2005 to 2015.

But this administration was an extremely brazen example. The Sri Lankan government increasingly looked like a family business. And it was run that way: a lot of secrecy, not much transparency, not many outsiders. The family tried to benefit from the policies the government was imposing.

Does the new government have the people’s trust?

Protesters are not happy with Ranil Wickremesinghe, the new president. They feel that his takeover reaffirms the Rajapaksas’ influence because he represents the establishment and because he appointed a friend of the Rajapaksa family as his prime minister.

What’s next for Sri Lanka?

In the short term, we probably will see continued turmoil. But people are invested in ensuring Sri Lanka doesn’t fall again into this situation where it’s teetering on autocracy, where there’s little transparency and where the will of the people is ignored. So it’s mostly a positive story.

More on Emily Schmall: She grew up in DeKalb, Ill., and once had a job detasseling corn. She decided to become a journalist in high school. She began her career at The Miami Herald in 2005 and joined the New Delhi bureau at The Times in 2020.