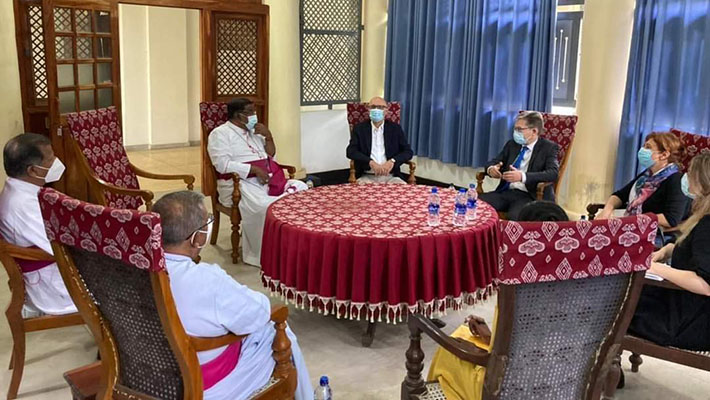 The Catholic leadership in the North-East warned that the Sri Lankan government was in the midst of a “concerted effort to change the demography of the Tamil majority Trincomalee, Mullaitivu and Mannar districts by settling Sinhalese from other areas,” according to a report in JDS Lanka.

The religious leaders raised the concern whilst meeting with Switzerland’s ambassador to Sri Lanka Dominik Furgler in Jaffna on Wednesday.

Dr. Fidelis Lionel Emmanuel Fernando of Mannar, Justin Bernard Gnanapragasam of Jaffna, Christian Noel Emmanuel of Trincomalee and Joseph Ponniah were amongst the leaders that met with Furgler. See more from JDS here.

Sri Lanka state sponsored colonisation of the North-East has been a concern for decades and a large driver of Tamil grievances, with fears that the government is attempting to erase the Tamil homeland. Since the end of the armed conflict in 2009 and the subsequent military occupation across the region, such efforts have accelerated.

Earlier this year, a cross-party collection of Tamil parliamentarians recently wrote a letter calling for an end to the “artificial alteration of the demographic pattern” of the Northern Province.