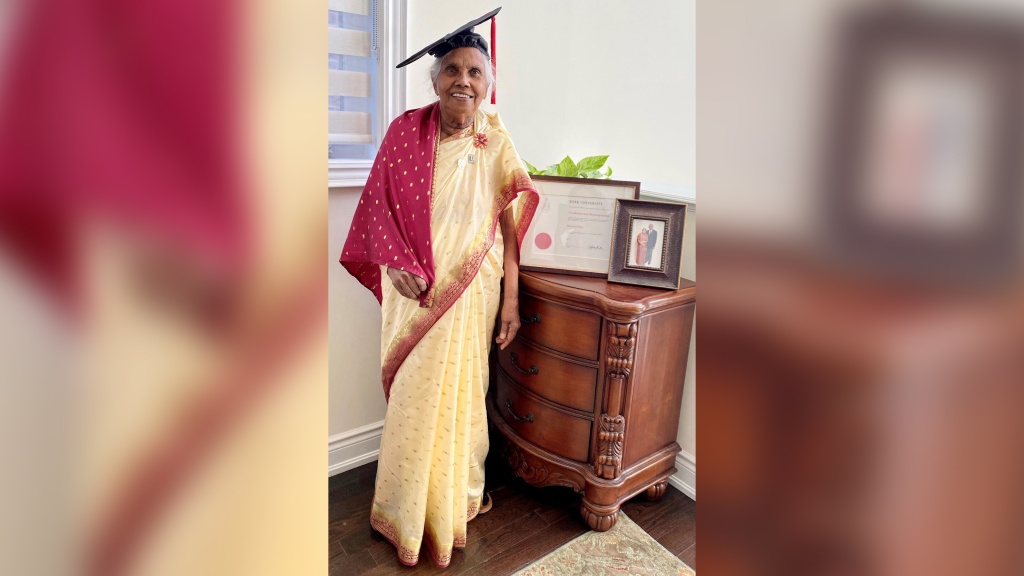 (CNN) — A grandmother of seven who emigrated from Sri Lanka has become the oldest person to earn a master’s degree at Canada’s York University — where she turned her passion for peace and learning into a political science degree.

Varatha Shanmuganathan is 87, but her soul is as young and vibrant as ever. When she isn’t playing Scrabble or dancing and singing with her grandchildren, she’s busy chasing her many dreams.

“It has been interesting. On the first of November, I was just an ordinary lady going about my ordinary life. On the second of November, when I graduated, everything changed,” Shanmuganathan told CNN.

That’s the day she became the oldest master’s graduate at the university in Ontario, according to York University spokesperson Gloria Suhasini. Shanmugunathan’s degree focused on the civil war in Sri Lanka and efforts to reach peace.

“This has always been a dream of mine, to study politics and earn a higher degree in it, and I am happy to have finally achieved it,” she said.

Born in Sri Lanka, in a small village called Velanai, Shanmuganathan found herself searching for answers and explanations regarding her country’s 26-year civil war.

The Sri Lankan civil war ended in May 2009 with the government crushing the Tamil Tigers in their heartland in the north of the island nation in the Indian Ocean. Sri Lanka’s long and bloody conflict devastated nearly two-thirds of the population in its northern and eastern provinces. As many as 70,000 people were killed.

“I always, in my heart and soul, have cherished and nourished peace, justice, equality and democracy,” Shanmuganathan said. “I wanted to tell the story of my country loud and clear to every generation — we should all yearn for peace.”

This is not Shanmuganathan’s first master’s degree. After earning her bachelor’s degree at the University of Madras in India, she returned to Sri Lanka to teach Indian history and English.

In 1990, she moved to London to teach English as a second language and received her first master’s degree in applied linguistics from the University of London.

Shanmuganathan immigrated to Canada in 2004 to be with her daughter, who had earned an MBA from York University’s Schulich School of Business.

When she found out the university offered free tuition to senior citizens, Shanmuganathan said, she immediately knew it was finally her chance to make her dream of studying political science come true. She began her studies in 2019 and continued throughout the coronavirus pandemic before graduating with 4,000 other students on November 2.

Shanmuganathan “represents the best of what York University stands for — access to education, a commitment to creating an inclusive environment for all, and an unshakable determination to create a better future,” York University President Rhonda Lenton said in a statement to CNN.

“She will no doubt inspire others to pursue higher education and act as a powerful role model for women of all ages.”

Despite achieving a lifelong goal, Shanmuganathan said she is not quite done yet. Her next planned endeavor is writing a book about post-war Sri Lanka and prospects for peace, she said, adding she hopes her story inspires others to look inside themselves to discover their passions.

“You should always have a goal in life,” Shanmuganathan said. “Find out what dream you want to follow and pursue it until the end. Think of something that interests you, but is also beneficial to others. Go on after it, get it, do it, achieve it.”