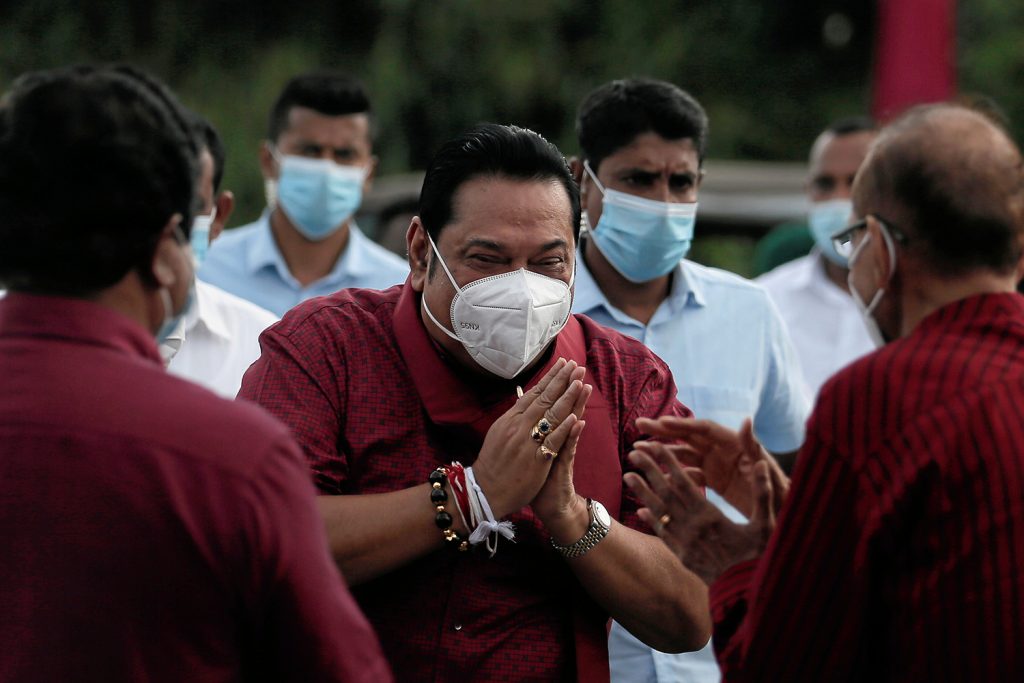 Sri Lanka’s upcoming parliamentary elections will serve as an indicator of the island’s future political direction, potential executive power buildup, and future geopolitical stance. With complications from the coronavirus pandemic, during which the Sri Lankan election commission has struggled to ensure that voting will be free, fair, and safe for all, the twice-delayed election may favor President Gotabaya Rajapaksa’s party, allowing it to strike down a significant constitutional amendment and move Sri Lanka further into China’s orbit of influence.

The parliamentary elections will have far-ranging impacts on Sri Lanka’s politics, rule of law, and foreign policy, potentially revitalizing some of the very conditions that led to ethnic conflict in the 1980s. Here’s what you need to know:

1. Who are the key players?

Beloved by Sri Lanka’s Sinhalese ethnic majority and reviled by the island’s Tamil and Muslim minorities, Gotabaya was elected president in late 2019 having led a national security and pro-nationalism campaign platform that capitalized on voters’ fears of terrorism in the wake of that year’s Easter Bombings. Unsurprising to many observers, the president’s short tenure thus far has been defined by ethnic chauvinism, militarization of the government, and widespread restrictions on journalists, minority activists, and civil society actors.

Gotabaya’s supporters have praised the former defense secretary for his role in ending Sri Lanka’s twenty-six-year civil war in 2009. His base continues to give the current president high marks for his tough stance on terrorism and his administration’s strong coronavirus response. Sri Lanka’s minorities, however, consider Gotabaya complicit in atrocities near the end of the nation’s civil war, including the military’s indiscriminate bombing of no-fire zones and hospitals in the Northern Province that resulted in 40,000 civilian deaths, as estimated by the United Nations (UN).

Former Sri Lankan President Mahinda Rajapaksa presided over the end of Sri Lanka’s bloody civil war until 2015 when he was defeated in the presidential elections. He is equally as divisive as his younger brother Gotabaya—who appointed him prime minister upon assuming office last year. In February, Mahinda announced that Sri Lanka would scrap all commitments to a 2015 post-civil-war UN Human Rights Commission resolution calling for accountability for the harm done by the Sri Lankan military during the civil war. Unsurprisingly, the move has caused alarm among rights groups and friction between Sri Lanka and the international community.

Previously a minor political party, the now powerful SLPP was relaunched in 2016 under the auspices of the Rajapaksa brothers and their close allies. It now maintains a strong advantage in the upcoming parliamentary elections. An SLPP victory would affirm the president’s nationalist agenda and embolden many of his policy positions. A key priority of the party is achieving a two-thirds parliamentary super-majority, which would allow Gotabaya’s administration to alter the country’s political structure: specifically by repealing the constitution’s 19th Amendment, a measure designed by the previous government to limit presidential powers relative to parliament and the judiciary.

The Rajapaksa brothers are unequivocal in their plans to scrap the 19th Amendment. They and the broader SLPP are quick to characterize the prior government’s blundering response to the 2019 Easter Bombings as a direct consequence of the amendment’s watered-down executive powers. Borrowing from the Rajapaksa political playbook, SLPP Chairman G.L. Peiris has exploited national security anxieties by claiming that a two-thirds majority would “rid the country of extremism” and “strengthen the defense apparatus.”

The parliamentary term beginning in 2020 marks the first time in modern memory that neither of Sri Lanka’s enduring political parties—the Sri Lankan Freedom Party (SLFP) or the United National Front (UNP)—is expected to lead parliament. The previous coalition government led by the two parties was regarded as incompetent and widely blamed for the mishandling of the Easter Bombings. Essentially on life support, the SLFP recently joined the SLPP. Meanwhile, infighting within the UNP resulted in the formation of the Samagi Jana Balavegaya (SJB) party. Headed by last year’s unsuccessful UNP presidential candidate Sajith Premadasa, the SJB is the strongest competitor to the president’s party. With Tamil support split between the SJB and UNP though, the SLPP still maintains a sizable advantage.

2. How is the coronavirus pandemic affecting the logistics of the upcoming election?

The coronavirus pandemic is fueling complex government responses to campaigns, rallies, and ballot counting related to the election. In early July, the Sri Lankan government issued strict health guidelines regarding election campaigning. At political rallies, attendees must wear face masks, maintain one meter of distance, and have access to a handwashing station. Attendance is limited to three hundred for normal rallies and five hundred for rallies with party leaders.

In mid-July, Sri Lankan authorities ran a simulated election in four of the island’s twenty-two electoral districts to ensure the proper functioning of coronavirus-safe protocol. The initiative was successful, but a spike in coronavirus cases around the same time caused the prime minister to cancel rallies.

Sri Lanka’s National Elections Commission made special provisions for people under quarantine to vote but later retracted the initiative citing obstacles to the plan. Once citizens cast their votes across the country, election results will not be tabulated until the following day for the first time since the 1970s: this will better allow election officials to abide by health guidelines.

3. What is the current state of governance in Sri Lanka under Gotabaya and how will a SLPP parliamentary majority impact it?

Sri Lanka is currently in constitutionally uncharted territory. President Gotabaya legally dissolved parliament in early March in anticipation of the elections. Despite the postponed elections, he has refused to reconvene it in the meantime. In early June, Sri Lanka exceeded its constitutional three-month maximum for a parliamentary recess, meaning that as of August, Gotabaya will have enjoyed two months without legislative oversight. During this time, the president created several task forces composed almost entirely of Sinhalese military and police officials: one task force is vaguely charged with creating a “virtuous society” and eradicating “anti-social behavior,” while another justifies the expropriation of Hindu and Muslim land in Sri Lanka’s Eastern Province under the pretext of Buddhist archaeological preservation. Each task force is ripe for weaponization against political enemies.

With a SLPP majority in parliament, the democratic erosion that has marked Gotabaya’s governance can be expected to persist, if not intensify. As Sri Lanka lurches towards authoritarianism, it will be less tolerant of the international community’s criticism. Gotabaya’s government has already abandoned or stalled any meaningful transitional justice initiative. It has likewise rejected a recent report from a UN Special Rapporteur that expressed alarm at a high degree of democratic backsliding under the new administration. Prime Minister Mahinda, meanwhile, is quick to dismiss minority grievances or demands for political devolution as ploys to divide the country. A SLPP win in the upcoming elections would validate the Rajapaksas’ Buddhist nationalist agenda at the expense of minorities.

4. What are the geopolitical dynamics of the upcoming parliamentary elections?

An immediate priority of the newly elected parliament will be to address Sri Lanka’s increasingly precarious financial standing. India and China have long vied for political and economic influence in Sri Lanka, and the currently imperiled financial status of the country is predicted to offer India and China an entrance. The direction in which parliament looks for assistance will be determined by the party in power.

During his presidency, Mahinda steered Sri Lanka towards China, primarily through a slew of ambitious Chinese-contracted infrastructure projects. Gotabaya seems to be following in his brother’s footsteps by signing onto over one billion dollars in pandemic relief loans from Beijing. Not only does the Chinese government have ties to influential Buddhist leaders in Sri Lanka, but it’s widely believed that Beijing actively supported Mahinda’s ultimately unsuccessful 2015 presidential bid. A SLPP parliamentary majority will facilitate Gotabaya’s closer embrace of Chinese solutions.

Delhi remains in the picture as Sri Lanka’s bilateral trade with India rivals that of with China. Currently, Sri Lanka and the Reserve Bank of India are finalizing a $400 million currency swap agreement to aid the island’s COVID-19 recovery efforts.

As China-India tensions escalate with their recent border dispute however, the two nations will aim to increase their clout in Sri Lanka and seek to benefit from the island’s strategic position in the Indian Ocean. An SLPP-led government can be expected to draw Sri Lanka away from India and closer to China given the president’s orientation towards Beijing as well as the Chinese government’s ability to offer Sri Lanka pandemic relief loans.

An SLPP two-thirds parliamentary majority is not a forgone conclusion—neither is the scrapping of the 19th Amendment. Yet, even if the opposition prevents the president’s party from securing a supermajority, the current moment’s prevailing ethnonationalism spells trouble for minority welfare and constitutional rule of law in Sri Lanka.

Phillip Baumgart is an intern in the Atlantic Council’s South Asia Center./Atlanticcouncil