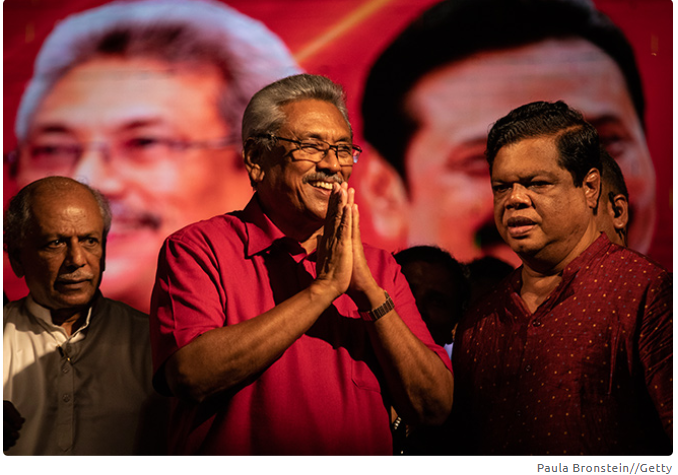 President Gotabaya Rajapaksa’s declaration that Sri Lanka won’t hesitate to quit international organisations that are relentlessly attacking the nation over ‘unsubstantiated war crimes allegations’ should not surprise anyone. Pending the UNHRC’s next two sessions, in September and March, only the choice of the messenger and the venue should have been a matter of speculation.

President Rajapaksa has now chosen the local audience and delivered the message/threat personally, and from the highest levels of the Sri Lankan state. He is both the Executive President and the Commander-in-Chief of the armed forces. The 11th National Ranaviru Day on 19 May, when Sri Lanka remembered its war heroes and commemorated the military victory over the LTTE in 2009, provided the backdrop.

During incumbent Prime Minister Mahinda Rajapaksa’s regime, when he was the ‘war-victorious president,’ the commemoration comprised a grand military parade. Under the intervening successor-regime, it was scaled down, to respect the sentiments of the nation’s Tamils, whose self-appointed sole representative the LTTE claimed to be. More importantly, from Victory Parade, the nomenclature too changed to Remembrance Day.

President Rajapaksa has now chosen the local audience and delivered the message/threat personally, and from the highest levels of the Sri Lankan state.

Going against the original, post-war Rajapaksa diktat, and following in the footsteps of the successor regime, this time around, the government allowed the Tamils, too, to mourn their martyrs in a limited way at Mullivaikkal — the final battleground. However, it directed the armed forces now in charge of the COVID-19 operations to ensure that Tamil mourners followed social distancing norms and obtained inter-district transit passes.

Some Tamil leaders, including the controversial former Northern Province Chief Minister C.V. Wigneswaran, were thus not allowed to cross from their Jaffna district to the adjoining Vanni district, for the remembrance. The mainline Tamil party, TNA, mostly kept away from the observances, caught as they were already in an intra-alliance tussle. The issue related to the ‘anti-LTTE statements’ alleged to have been made by senior leader M.A. Sumanthiran, identified closely with party boss, R. Sampanthan.

“If any international body or organisation continuously targets our country and our war heroes, using baseless allegations, I will also not hesitate to withdraw Sri Lanka from such bodies or organisations,” President Rajapaksa declared in his speech at the nation’s War Memorial. “Even leaders of powerful countries have emphatically stated that they would not allow any action against their war heroes,” he said.

Incumbent Gotabaya praised his brother and wartime president and now Prime Minister, Mahinda Rajapaksa, for the war-victory. “It was President Mahinda Rajapaksa who gave the leadership for this battle in his capacity as the Commander-in-Chief,” he recalled.

Similar views were expressed separately by army chief, Lt. Gen. Shavendra Silva. “Without brave and courageous leadership, defeating the LTTE would have been a pipedream,” he said, recalling how President Mahinda called him from Iran, where he was at the time, to tell him ‘not to abort’ the mission, whoever asked him to do so. He did not name names of persons, whom President Mahinda might have anticipated to give contra-instructions.

As Maj. Gen. Silva headed a fighting division in the LTTE war, and was praised for his leadership and the contributions of his division in bringing the war to an early end. The US, which registered its protest at the time of his elevation as army chief by the previous regime, has since refused entry to Gen. Silva, after the Rajapaksa returned to power.

Barring the TNA outside-underwriter of the government and rights groups, from within the country and outside, no partner-party or leader of then president Maithripala Sirisena, including alienated prime minister Ranil Wickremesinghe, protested the elevation. In turn, Ranil and his ruling UNP were not only party to the creation of war-time army chief, Gen. Sarath Fonseka, as ‘Field Marshal’, but also facilitated the latter’s induction into the party, Parliament and Cabinet.

President Gotabaya did not name the international organisations that Sri Lanka may choose to quit, nor those countries whose leaders had defended their war heroes. However, indications are that IMF, an UN-affiliate, may be even more circumspect than already in granting COVID-19-related global aid to the country. Already, Prime Minster Mahinda indicated last fortnight the IMF pandemic-aid remained a promise — and was still being negotiated.

With parliamentary polls still round the corner, it was also a message to their traditional Sinhala-Buddhist nationalist vote bank, whose numbers are not small. 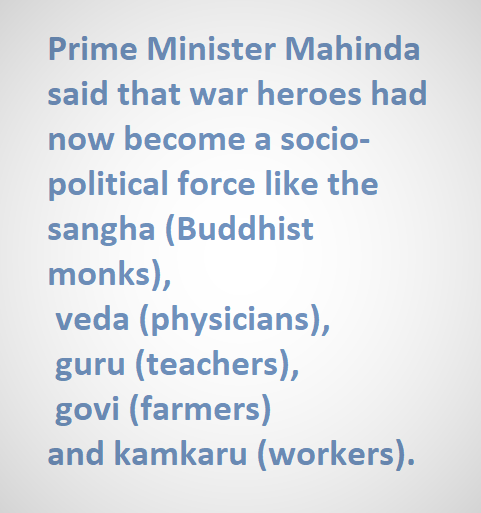 The alternatives for President Gotabaya to address the issue and choosing the martyrs’ day for the same, would have been either for him or Prime Minister Mahinda Rajapaksa, if not the nation’s Permanent Representatives (PR) at Geneva or the UN, to hand down the message at the UNHRC’s September session or of the UN General Assembly, a month later. The former would have been too small a venue for the top two leaders, and the latter, namely, the UNGA may be tied down to COVID-19-centric global discourse this time round.

Otherwise, too, it suited the Rajapaksas to address the domestic constituencies, including the ranks and families of the armed forces, nearer home, and also the ‘international community’, at the same time. It is tantamount to reassuring the former and cautioning the latter. Of course, with parliamentary polls still round the corner, it was also a message to their traditional Sinhala-Buddhist nationalist vote bank, whose numbers are not small.

Gotabaya’s message needed being sent out early on, from their perspective and that of the armed forces, after the previous government got officers up to the level of the nation’s serving Chief of Defence Staff (CDS), Adm. Ravindra Wijegunaratne, arrested for alleged ‘war crimes’, as they had promised the UNHRC in general terms. As if it were their repentance for the ‘wrongs’ done to the nation’s armed forces by the previous Government, Gotabaya, as if out of the blue, granted presidential pardon to a solder, condemned to death by the nation’s courts for the ‘murder’ of eight Tamils in 2000.

Coinciding with the martyrs’ day, the army alone granted promotions to a staggering number of 14,000-plus men in all ranks, to the immediate next one. The army has explained that those promotions were all long overdue (as if to indicate that the previous rulers either sat on them or wantonly delayed them).

In his own martyrs’ day message, Prime Minister Mahinda sought to address internal criticism arising from the recent appointment of another retired army officer to what is considered a senior civilian position. The reference possibly was also to predecessor Ranil Wickremesinghe’s criticism in this regard.

In his message, he condemned attempts to make induction of veteran military and police officers into the administration, as ‘militarisation’. He said that war heroes had now become a socio-political force like the sangha (Buddhist monks), veda (physicians), guru (teachers), govi (farmers) and kamkaru (workers). Whenever his Sri Lanka Podujana Peramuna (SLPP) formed a government, some members of the armed forces and the police would hold positions in them, he asserted.

The current appointment apart, on assuming office, President Gotabaya had named another war-veteran, Maj. Gen. Kamal Gunaratne (retd) as the all-important Defence Secretary, reporting directly to him as Defence Minister. Gen. Gunaratne headed the celebrated 53rd Division during the war.

Even without it all, the Rajapaksas as the democratically-elected rulers and Sri Lanka, once again under their care, needed to send out an early message to the West, before they both strategised for the UNHRC. If not now, in the March session next year, the UNHRC is required to evaluate the progress made in the past two-plus years of time given to Sri Lanka to meet its mutually-agreed accountability commitments (under the previous regime).

Even in his election manifesto last year, candidate Gotabaya declared in unequivocal terms that if elected president, he would throw out the ‘co-authored’ UNHRC resolutions, approved by his predecessor-regime. In this context, the anniversary-centric strongly-worded statement of war-time UNHRC chief, Navi Pillay, calling for international cooperation to ensure justice, accountability and compensation in the name of Sri Lankan Tamils, may question her credibility and non-partisanship while in office, even more. So can the reiterated call by Canadian Prime Minister, Justin Trudeau, for Sri Lanka to ‘pursue a meaningful accountability process.’

Coming at a time when the TNA, as the major voice of the Tamil people has commenced contacts with the Rajapaksa regime, to restart the political negotiations that collapsed after the US took the war crimes issue to the UNHRC in 2012, the Navi Pillay-Trudeau kind of reiterations can torpedo the current efforts, too, if unchecked by the international community, itself. Otherwise, now that US President Donald Trump has threatened to quit the WHO after pulling out of the UNHRC, but after handing over the Sri Lanka brief to trans-Atlantic ally in the UK, Sri Lanka and the Rajapaksas do not need other precedents to implement the threat to ‘quit’.