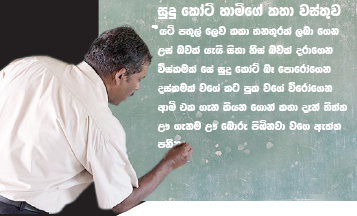 (AHRC) The Asian Human Rights Commission has received information regarding Mr. Kushan Shalika Herath (30) a teacher at Kuliyapitiya Central College. He teaches Science for Technology for Advanced Level students at Kuliyapitiya Central College. On the side, he has published some of his poems on Social Media. According to Kushan, he has taught this particular subject, ‘Science for Technology,’ at Kuliyapitiya College for three years. According to recently issued Advanced Level results, his students have had excellent results within district ranks.

He engages in creative writing, writes poems as a hobby and has published many of his poems on the Internet in Social Media. Some of his poems were published on his FB page as well. Mr. Kushan said that his creative writings are highly appreciated by his peers as well as senior teachers specializing in literature.

Meanwhile several officials of the Education Ministry’s Counter-Fraud Unit visited Kushan’s school on 23 January 2017. They questioned him about writing and publishing his poems and their content. Unfortunately, on this occasion, the school Principal remained silent about Kusan’s situation. It was learned that the Principal yielded to the Authorities demands and did not openly support Kushan.

The Ministry of Education officials made the following point. Kushan insulted both the School and the Education Ministry by publishing his ordinary poems while being employed as a State Sector Teacher. Kushan was asked if he was trying to persuade teachers and students to speak against the government. The investigators recorded statements from several teachers and students.

Kushan states that he had not written anything detrimental to the school. He has only written of interesting happenings in the school. When the two Ministry of Education senior officials questioned him, he opened his Facebook (FB) and showed them all the poems he had written. The officials concurred that the poems did not in any way damage the reputation of the School or of any individual.

Later, however, he received a letter from the Ministry of Education transferring him to Mayurapada Central College, Narammala, effective 11 June 2017. He states that he joined the Kuliyapitiya Central College to teach the newly introduced subject, Science for Technology to Advance Level students. The new school does not have any vacancies in that subject.
Kushan states that he has not been accused of any other misdemeanors that justified his transfer. As far as he was aware, he neither violated any principles as a teacher nor had he failed in carrying out his duties as required by the School.

According to the transfer, Kushan has been directed to teach Mathematics in his new workplace. He is not up-to-date on this particular subject. In effect, this transfer is only to replace a teacher who has gone on sick leave for two weeks. He believes that there is no justifiable reason for his transfer. This transfer was not made in line with the established National Transfer Policy Circular No. 2007/20 on teacher transfers.

On Wednesday, 14 June, the Education Ministry’s Media Unit, stated: the transfer was made due to an administrative requirement and had nothing to do with their investigation.

Meanwhile, Mr. Joseph Stalin, the General Secretary of the Ceylon Teachers Union (CTU), made a pronouncement. He said that the transfer had been done in a haphazard manner, without conforming to the National Transfer Policy Circular No. 2007/20, on teacher transfers. He has written to the Ministry of Education in protest against the injustice and will keep abreast of the problem. If nothing is done to reinstate Kushan,the CTU will take legal action against the Ministry.

Kushan states that he has the right to enjoy free speech and expression guaranteed by the Constitution. He has never engaged in anything illegal. He has not caused any damage to the reputation of an individual or Institution. While he has behaved like a peaceful citizen, the Ministry of Education officials have violated his rights.