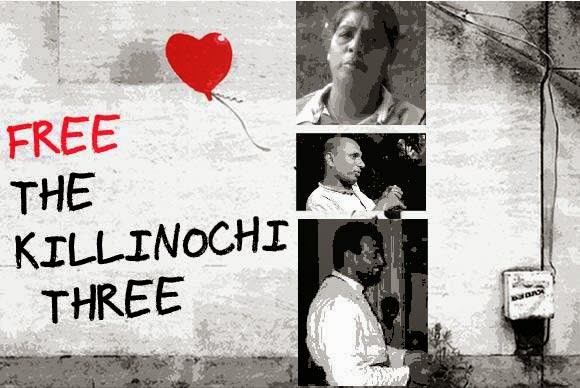 NYT/ GARDINER HARRIS and DHARISHA BASTIANSMARCH
NEW DELHI — Fears of a broad crackdown against rights activists in Sri Lanka have been heightened after the Sri Lankan police recently arrested two prominent human rights advocates and a woman who has made a public campaign of finding her missing son.
The arrests took place just as the United Nations Human Rights Council considers starting an inquiry into possible war crimes committed by government forces and separatists during Sri Lanka’s 26-year civil war.

Ruki Fernando, one of Sri Lanka’s most prominent human rights activists, and the Rev. Praveen Mahesan, a Roman Catholic priest and the former director of the Jaffna-based Center for Peace and Reconciliation, were detained around 10 p.m. on Sunday by Sri Lanka’s Terrorist Investigation Department in Kilinochchi, a former rebel stronghold.

The Sri Lankan police said the two activists were being held under the country’s antiterrorism laws. “They have been arrested on charges of creating communal disharmony and inciting racial hatred,” said Ajith Rohana, a police spokesman. He said the two would be taken to Colombo, the capital, for further interrogation.

On Friday, the government arrested Jeyakumari Balendran, an advocate for efforts to find missing people, on charges of harboring an armed man. Her own son, a child conscript to rebel forces, is still missing after he reportedly surrendered to government forces in 2009 and then was pictured in a government publication about rebel rehabilitation. Ms. Balendran’s 13-year-old daughter was taken into custody on Friday and has since been given to child probation officers, the police said.

Military officials denied that Ms. Balendran’s detention was connected to her demonstrations on behalf of missing persons. But the multiple arrests sent a ripple of dread through the country’s human rights groups.

“These are dark days,” wrote Fred Carver of the Sri Lanka Campaign for Peace and Justice in an email.

The United States Embassy in Colombo released a statement on Monday expressing concern about the arrests and saying that as a result, “we remain convinced that continued scrutiny by the Human Rights Council is necessary.”

Five years after the end of a decades-long civil war in which government forces battled the Tamil Tigers — a notoriously brutal insurgent group — the Sri Lankan government has shown little appetite for any robust investigation into possible war crimes. Some 40,000 people, many of them civilians, are estimated to have been killed in the war’s final stages.

Two resolutions pressing the Sri Lankan government to investigate war crimes have already been passed by the Human Rights Council, but Sri Lanka’s failure to heed these resolutions has led some nations to call for an independent inquiry that does not depend on the government.

The end of the insurgency has been a boon for Sri Lanka’s economy, as well as for the political fortunes of the family of President Mahinda Rajapaksa. Roads have been rebuilt, tourists have returned and the pervading sense of unease that gripped the country for decades has largely evaporated.

President Rajapaksa is popular in Sri Lanka because of this turnaround, but an independent investigation of conduct during the war would be risky for him and his brother, Defense Secretary Gotabaya Rajapaksa, who led the war effort.

A version of this article appears in print on March 18, 2014, on page A4 of the New York edition with the headline: 3 Activists Held in Sri Lanka, Raising Fears of Crackdown. Order Reprints|Today’s Paper|Subscribe
NYT