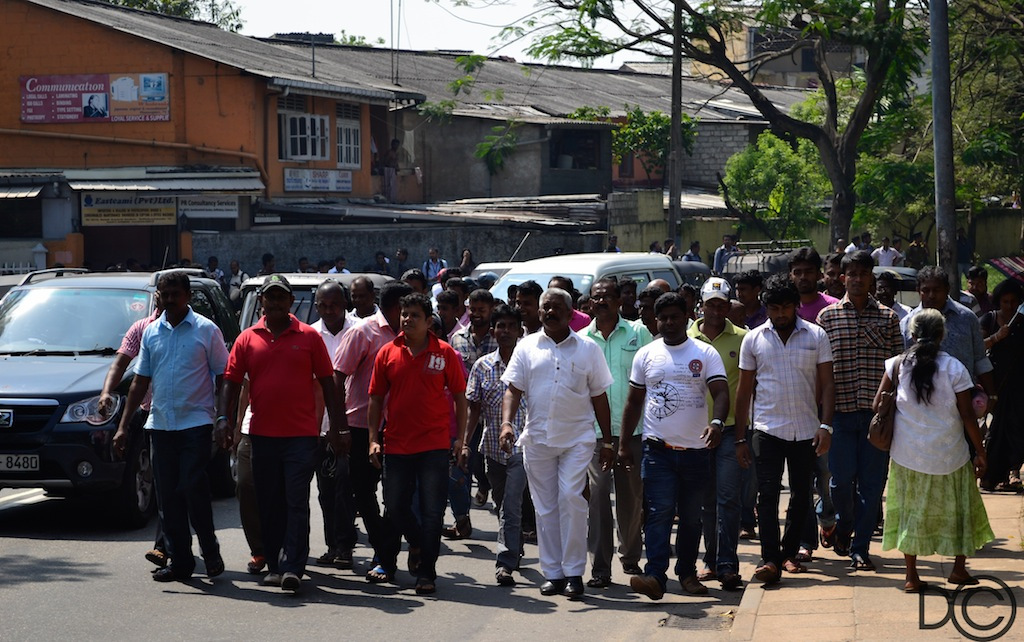 Dinouk Colombage
Sri Lanka’s descent towards an oppressive State is far from complete; however, recent actions carried out by the government have shown that this is progressing rapidly towards such a regime.
Media censorship, impeachment of the Chief Justice of the Supreme Court and intimidation and assault of protesters by government supporters are all signs of regime that is not willing to accept any form of opposition.

On Tuesday, 15th January, the Supreme Court was the scene of what can only be described as an exhibition of the strong arm of the regime. Police barricades surrounded the court complex, armoured vehicles and armed STF guards patrolled the streets and over a hundred government supporters gathered in a mob across the road yelling out support for the government.

The mob reminded many people of the previous protest that took place outside of the courts which saw supporters of the government assault protesters and lawyers with stones and clubs.

As lawyers in support of the independence of the judiciary appeared ready to talk to the media, police lines were formed preventing people from approaching the barricades that divided the lawyers from the media scrum. Anybody who happened to be on the wrong side of this police line was forced back in to a crowd that had been formed by the government supporters.

Further down the road a bus full of armed STF personal was being unloaded as they formed a second line between the police barricades and the courts, an ominous sign for many people who were out there in opposition.

While nothing violent emerged from this day, it was quite clear that the government had succeeded in quashing any hopes by the opposition to express their support for an independent judiciary. The lack of protesters in opposition to the impeachment of the now former Chief Justice is clear indication of the fear the recent assaults have instilled.

The government has not only successfully dissuaded street protests; they have also expressed intentions to prevent
any form of legal opposition.

On Wednesday, the Minister to Fisheries and Aquatic Resources, Dr Rajitha Senaratna, suggested that Dr. Paikiasothy Saravanamuttu (Executive Director to the Centre of Policy Alternatives) could be summoned before the House for contempt of Parliament.

In fact the only clear contempt by Dr. Saravanamuttu is CPA’s decision to oppose the controversial decision by the Speaker and Parliament regarding the impeachment of the Chief Justice. While no official summons have been delivered to date, this is just another avenue of opposition that is being halted by the government.

Media organisations have been censored with independent papers being purchased and their stances changed, the judiciary is being chopped and changed whenever there is any form of opposition to the actions of the regime. While protesters taking to the streets are being intimidated with the presence of armed personal and mobs of government supporters and even those who seek legal avenues of opposition are being labelled as being in contempt of Parliament.

The irony is that Sri Lanka was a country that achieved its independence from British rule through popular opposition and peaceful demonstrations. Now as the country looks to move forward from the 30 year civil war, the present government is ensuring that any expression of dissatisfaction is subdued through any means possible.
– Courtesy – Groundviews