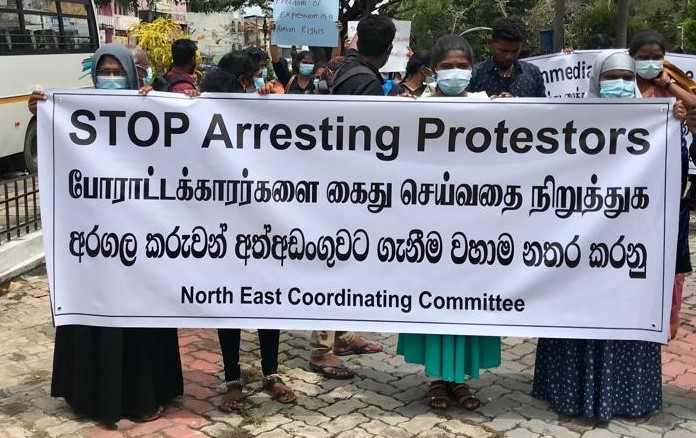 Image: Recent protest held in the North of Sri Lanka.

In endorsing the statement issued by International academics calling on Sri Lanka president to protect right to protest and other freedoms 25 Buddhist monks and nuns residing in the West has issued the following statement today.

Protect the right to protest and other freedoms in Sri Lanka

We, the undersigned Buddhist monks and nuns residing in the West, fully support the following appeal circulated by academics calling on the President of Sri Lanka to protect the right to protest and other freedoms presently being curtailed:

We fully condemn the violent assault on peaceful protestors in Colombo by the Sri Lankan security forces on 22 July 2022.

We are aghast at reports that five of the protestors were abducted and tortured by security force personnel; violently beaten, forced to kneel on rocks, and perform extremely tedious exercises while being threatened with death if they tried to escape. Nine protest leaders were also arbitrarily arrested and detained by the police.

That such a brutal attack against non-violent protestors was ordered by the country’s new President Ranil Wickremasinghe, less than 24 hours after taking office, is shocking and sends distressing signals about his method of governance. Over the last several months the protestors have been inspiring and disciplined in exercising basic democratic rights to call attention to the crisis. This space for resistance has also been used for educational purposes, with a university and library, advancing knowledge to all groups of people. The reference to protestors as “fascist” is totally inaccurate, inappropriate and damaging; it weaponizes the term to provide an excuse for the use of extreme force.

Wickremasinghe was elected by parliament to take on the presidency, which was vacated due to the non-violent pro-democracy movement against authoritarianism and failed governance. His decision to follow in the footsteps of his predecessors is deeply alarming and does not offer the prospect of Sri Lanka progressing beyond the current crisis it is in. It is disheartening and telling that one of his first actions in office was to attack the people rather than take steps to address the suffering of the people.

We call on the President and government of Sri Lanka to immediately desist from the use of any force against protestors and reduce the current extreme military presence around the protest site at the Galle Face Green in Colombo and around the country including the north and east. The government must investigate the use of extreme force and torture and hold accountable those found guilty of committing these crimes. We call on the government to respect the right of all Sri Lankans to protest and protect protest spaces. The Sri Lankan constitution guarantees Sri Lankans fundamental rights including freedom of speech, expression and peaceful assembly; in addition, these are internationally guaranteed rights that Sri Lanka is committed to protect.

Signatories (add name and affiliation below)