239 Experts With 1 Big Claim: The Coronavirus Is Airborne 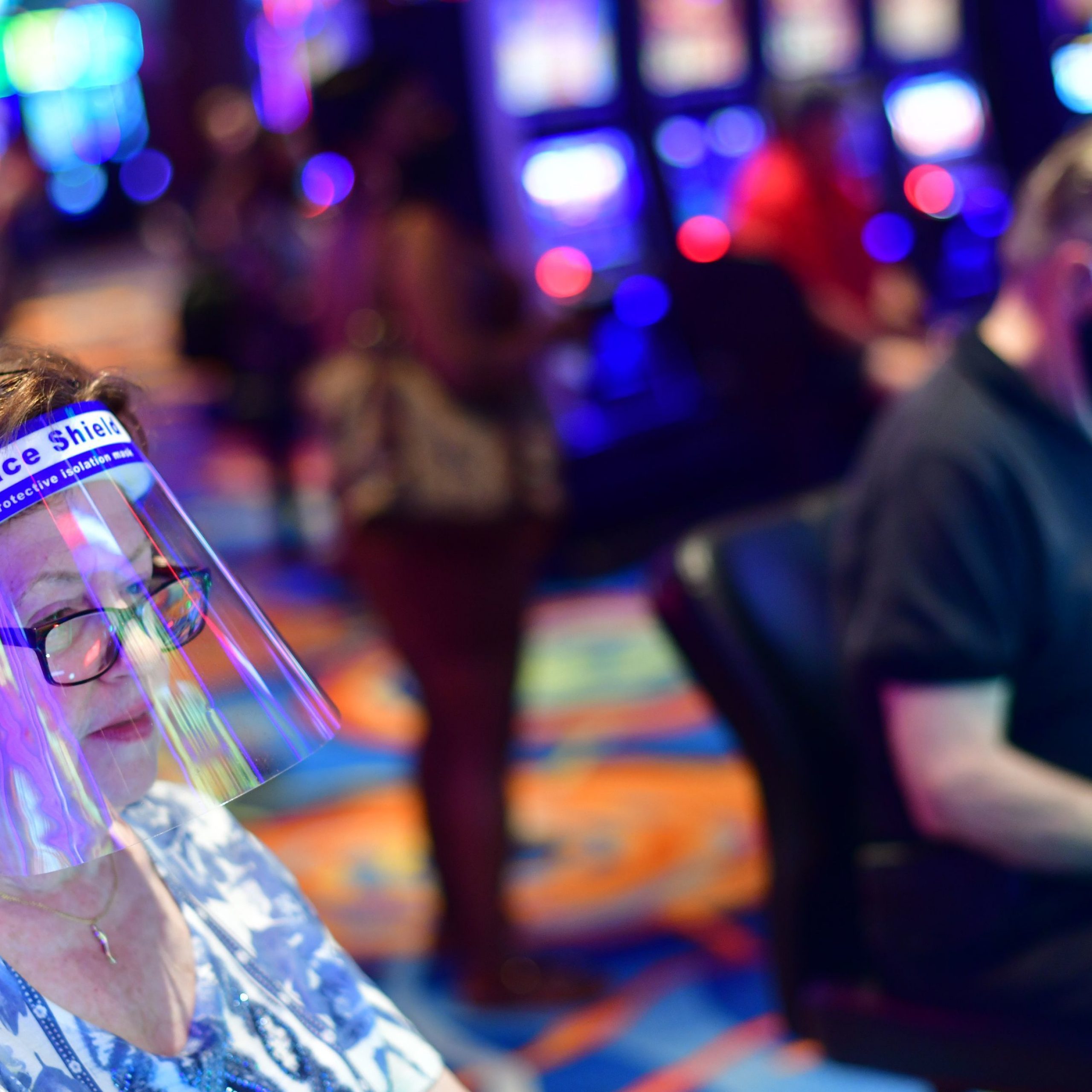 The coronavirus is finding new victims worldwide, in bars and restaurants, offices, markets and casinos, giving rise to frightening clusters of infection that increasingly confirm what many scientists have been saying for months: The virus lingers in the air indoors, infecting those nearby.

If airborne transmission is a significant factor in the pandemic, especially in crowded spaces with poor ventilation, the consequences for containment will be significant. Masks may be needed indoors, even in socially distant settings. Health care workers may need N95 masks that filter out even the smallest respiratory droplets as they care for coronavirus patients.

The World Health Organization has long held that the coronavirus is spread primarily by large respiratory droplets that, once expelled by infected people in coughs and sneezes, fall quickly to the floor.

But in an open letter to the WHO, 239 scientists in 32 countries have outlined the evidence showing that smaller particles can infect people and are calling for the agency to revise its recommendations. The researchers plan to publish their letter in a scientific journal.

Even in its latest update on the coronavirus, released June 29, the WHO said airborne transmission of the virus is possible only after medical procedures that produce aerosols, or droplets smaller than 5 microns. (A micron is equal to 1 millionth of a meter.)

Proper ventilation and N95 masks are of concern only in those circumstances, according to the WHO. Instead, its infection control guidance, before and during this pandemic, has heavily promoted the importance of handwashing as a primary prevention strategy, even though there is limited evidence for transmission of the virus from surfaces. (The Centers for Disease Control and Prevention now says surfaces are likely to play only a minor role.)

Dr. Benedetta Allegranzi, the WHO’s technical lead on infection control, said the evidence for the virus spreading by air was unconvincing.

“Especially in the last couple of months, we have been stating several times that we consider airborne transmission as possible but certainly not supported by solid or even clear evidence,” she said. “There is a strong debate on this.”

But interviews with nearly 20 scientists — including a dozen WHO consultants and several members of the committee that crafted the guidance — and internal emails paint a picture of an organization that, despite good intentions, is out of step with science.

Whether carried aloft by large droplets that zoom through the air after a sneeze, or by much smaller exhaled droplets that may glide the length of a room, these experts said, the coronavirus is borne through air and can infect people when inhaled.

Most of these experts sympathized with the WHO’s growing portfolio and shrinking budget, and noted the tricky political relationships it has to manage, especially with the United States and China. They praised WHO staff for holding daily briefings and tirelessly answering questions about the pandemic.

But the infection prevention and control committee in particular, experts said, is bound by a rigid and overly medicalized view of scientific evidence, is slow and risk-averse in updating its guidance and allows a few conservative voices to shout down dissent.

“They’ll die defending their view,” said one long-standing WHO consultant, who did not wish to be identified because of her continuing work for the organization. Even its staunchest supporters said the committee should diversify its expertise and relax its criteria for proof, especially in a fast-moving outbreak.

“I do get frustrated about the issues of airflow and sizing of particles, absolutely,” said Mary-Louise McLaws, a committee member and epidemiologist at the University of New South Wales in Sydney.

“If we started revisiting airflow, we would have to be prepared to change a lot of what we do,” she said. “I think it’s a good idea, a very good idea, but it will cause an enormous shudder through the infection control society.”

In early April, a group of 36 experts on air quality and aerosols urged the WHO to consider the growing evidence on airborne transmission of the coronavirus. The agency responded promptly, calling Lidia Morawska, the group’s leader and a longtime WHO consultant, to arrange a meeting.

But the discussion was dominated by a few experts who were staunch supporters of handwashing and felt it must be emphasized over aerosols, according to some participants, and the committee’s advice remained unchanged.

Morawska and others pointed to several incidents that indicate airborne transmission of the virus, particularly in poorly ventilated and crowded indoor spaces. They said the WHO was making an artificial distinction between tiny aerosols and larger droplets, even though infected people produce both.

“We’ve known since 1946 that coughing and talking generate aerosols,” said Linsey Marr, an expert in airborne transmission of viruses at Virginia Tech.

Scientists have not been able to grow the coronavirus from aerosols in the lab. But that doesn’t mean aerosols are not infective, Marr said: Most of the samples in those experiments have come from hospital rooms with good air flow that would dilute viral levels.

In most buildings, she said, “the air-exchange rate is usually much lower, allowing virus to accumulate in the air and pose a greater risk.”

The WHO also is relying on a dated definition of airborne transmission, Marr said. The agency believes an airborne pathogen, like the measles virus, has to be highly infectious and to travel long distances.

“We have this notion that airborne transmission means droplets hanging in the air capable of infecting you many hours later, drifting down streets, through letter boxes and finding their way into homes everywhere,” Hanage said.

Experts all agree that the coronavirus does not behave that way. Marr and others said the coronavirus seemed to be most infectious when people were in prolonged contact at close range, especially indoors, and even more so in superspreader events — exactly what scientists would expect from aerosol transmission.

The WHO has found itself at odds with groups of scientists more than once during this pandemic.

The agency lagged behind most of its member nations in endorsing face coverings for the public. While other organizations, including the CDC, have long since acknowledged the importance of transmission by people without symptoms, the WHO still maintains that asymptomatic transmission is rare.

“At the country level, a lot of WHO technical staff are scratching their heads,” said a consultant at a regional office in Southeast Asia, who did not wish to be identified because he was worried about losing his contract. “This is not giving us credibility.”

The consultant recalled that the WHO staff members in his country were the only ones to go without masks after the government there endorsed them.

Many experts said the WHO should embrace what some called a “precautionary principle” and others called “needs and values” — the idea that even without definitive evidence, the agency should assume the worst of the virus, apply common sense and recommend the best protection possible.

“There is no incontrovertible proof that SARS-CoV-2 travels or is transmitted significantly by aerosols, but there is absolutely no evidence that it’s not,” said Dr. Trish Greenhalgh, a primary care doctor at the University of Oxford in Britain.

“So at the moment we have to make a decision in the face of uncertainty, and my goodness, it’s going to be a disastrous decision if we get it wrong,” she said. “So why not just mask up for a few weeks, just in case?”

After all, the WHO seems willing to accept without much evidence the idea that the virus may be transmitted from surfaces, she and other researchers noted, even as other health agencies have stepped back from emphasizing this route.

“I agree that fomite transmission is not directly demonstrated for this virus,” Allegranzi, the WHO’s technical lead on infection control, said, referring to objects that may be infectious. “But it is well known that other coronaviruses and respiratory viruses are transmitted, and demonstrated to be transmitted, by contact with fomite.”

The agency also must consider the needs of all its member nations, including those with limited resources, and make sure its recommendations are tempered by “availability, feasibility, compliance, resource implications,” she said.

Aerosols may play some limited role in spreading the virus, said Dr. Paul Hunter, a member of the infection prevention committee and professor of medicine at the University of East Anglia in Britain.

But if the WHO were to push for rigorous control measures in the absence of proof, hospitals in low- and middle-income countries may be forced to divert scarce resources from other crucial programs.

“That’s the balance that an organization like the WHO has to achieve,” he said. “It’s the easiest thing in the world to say, ‘We’ve got to follow the precautionary principle’ and ignore the opportunity costs of that.”

In interviews, other scientists criticized this view as paternalistic. “‘We’re not going to say what we really think, because we think you can’t deal with it?’ I don’t think that’s right,” said Don Milton, an aerosol expert at the University of Maryland.

Even cloth masks, if worn by everyone, can significantly reduce transmission, and the WHO should say so clearly, he added.

Several experts criticized the WHO’s messaging throughout the pandemic, saying the staff seems to prize scientific perspective over clarity.

“What you say is designed to help people understand the nature of a public health problem,” said Dr. William Aldis, a longtime WHO collaborator based in Thailand. “That’s different than just scientifically describing a disease or a virus.”

The WHO tends to describe “an absence of evidence as evidence of absence,” Aldis added. In April, for example, the WHO said, “There is currently no evidence that people who have recovered from COVID-19 and have antibodies are protected from a second infection.”

The statement was intended to indicate uncertainty, but the phrasing stoked unease among the public and earned rebukes from several experts and journalists. The WHO later walked back its comments.

In a less public instance, the WHO said there was “no evidence to suggest” that people with HIV were at increased risk from the coronavirus. After Joseph Amon, director of global health at Drexel University in Philadelphia, pointed out that the phrasing was misleading, the WHO changed it to say the level of risk was “unknown.”

But WHO staff and some members said the critics did not give its committees enough credit.

“Those that may have been frustrated may not be cognizant of how WHO expert committees work, and they work slowly and deliberately,” McLaws said.

Dr. Soumya Swaminathan, the WHO’s chief scientist, said agency staff members were trying to evaluate new scientific evidence as fast as possible but without sacrificing the quality of their review. She added that the agency will try to broaden the committees’ expertise and communications to make sure everyone is heard.

“We take it seriously when journalists or scientists or anyone challenges us and say we can do better than this,” she said. “We definitely want to do better.”

This article originally appeared in The New York Times.