2018 in retrospect: An ‘annus horribilis’ for Lankan economy? – Nimal Sanderatne 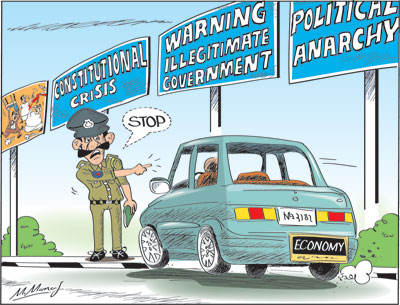 The year that is coming to a close was one of political uncertainty and economic instability. The economy, which was showing some signs of recovery with exports growing at a rapid pace, tourism booming and prospects of increased foreign investment, was transformed into an unstable one.

The political and constitutional crisis compounded the adverse impacts of the external shocks that the economy was facing at the time to create a critical period for the economy. The global financial developments and the political crisis aggravated the country’s external financial vulnerability by an outflow of capital, withholding of foreign assistance, a blow to the booming tourist industry and the downgrading of the country’s international risk ratings that increased the costs of foreign borrowing.

This year can well be described as ‘an annus horribilis’ for the Sri Lankan polity and economy.

Admittedly there were fundamental weakness in the country’s economic performance prior to the political and constitutional crisis of end October. However it turned into a horrible year for the economy when the President acted unconstitutionally to create anarchy and confusion and bring the economy to a halt.

The adverse impacts were mainly felt in the increase vulnerability of the external finances. It aggravated the outflow of capital, struck a blow to the booming tourist industry, withheld foreign assistance, downgraded the country’s international risk ratings and increased the costs of foreign borrowing,

In this darkest hour the beacon of light was the independence of the judiciary. The Supreme Court gave a unanimous judgment that the President’s action was clearly unconstitutional and saved the country from being dumped as a failed democracy with unimaginable economic consequences.

The adverse economic consequences of the political instability, uncertainty and confusion may affect the economy adversely next year, too.

Although 2018 was expected to be a year of economic recovery, the first half’s economic performance was modest and the third quarter’s growth was an unexpected disappointment. At the beginning of the year, the economy was expected to grow by 4.5 percent to 5 percent. This was revised downward to around 4 percent later. Even this is unlikely due to the modest performance in the first nine months and the disruption to the economy in the last two months of the year by the political crisis.

The economy grew by only 3.3 percent in the first half of the year and fell to 2.9 percent in the third quarter. The economy is likely to have grown by 3.5 percent at most this year compared to 3.1 percent in 2017. This year’s economic growth is below the annual average for the post-independent period.

There was significant recovery in food crops due to favourable weather conditions, but plantation crops did not fare too well till October. Particularly disappointing was the low growth in manufacturing. Construction that was a growth sector in recent years slowed down. Services, however, grew.

The two bright spots in the economy were the boom in tourism and growth in exports. Tourist earnings are expected to reach US$ 3.5 billion for the year. However, the country’s image of being the world’s best tourist destination was tarnished by the political anarchy. In the first ten months, exports increased by 5 percent to US$ 9.9 billion. Manufactured exports grew by 8.9 percent, while agricultural exports declined slightly.

However, this growth in exports did not improve the trade balance. The trade deficit expanded to US$ 8.9 billion in the first ten months owing to an import growth of 10.9 percent wiping out the gains in exports. The Central Bank expects the trade gap to be reduced in the last two months owing to lesser imports.

All three international rating agencies, Fitch, Moody’s and Standard and Poor downgraded the country. This not only affected the capital outflow and foreign investments, but increased interest rates at which the country could borrow. Consequently, debt repayment would be more costly and the country’s external finances are more vulnerable.

Last year was not the only horrible year in the country’s 70 independent years. The first of such horrible years was 1958 when the first major outburst of ethnic violence occurred. The tragic events of that violence were captured best in Tassie Vittachi’s Emergency ’58. The human tragedy was horrendous.

It also left a permanent imprint on the economy. It was not that year’s economic destruction and disruption that really mattered. It was the huge brain drain immediately and for years to come that robbed the country of valuable human resources and arrested the country’s long run development.

It is not only Tamil professionals, academics, doctors, engineers and accountants, among others, who left the country, but also the leaders of the country’s burgher community. The brain drain caused by the ethnic violence was an enormous economic loss.

Similarly, the ethnic violence of 1983 was another horrible year. It set back the economy in many irreparable ways. It led to another huge brain drain, the booming tourist industry was ruined for several decades by the subsequent terrorist violence and civil war and the take-off into rapid economic growth stifled.

By 1983, the benefits of economic liberalisation were turning the country into an attractive location for foreign investment. Many multinational companies had decided to set up industries in Sri Lanka when the ethnic violence occurred. They gave up Sri Lanka and set up their industries in stable countries, such as Singapore, Malaysia and Thailand. That was the end of the prospect of becoming a Newly Industrialised Country (NIC).

Two other horrible years that were turning points were the insurgencies of 1971 and 1988-89. Although the 1971 insurgency was short lived and its direct impact was not much, it had a permanent impact in distorting government expenditure and channelling resources away from economic and social infrastructure to defence. Defence expenditure that was less than 1 percent of GDP was tripled and resources that could have been spent on improving health, education and for development projects were channelled to defence.

The 1988-89 insurgency disrupted and dislocated economic activities in most areas and the economy registered negative growth. These were horrible years indeed for more than economic reasons. Many thousands of lives were lost and the life of civilians were insecure.

All things considered, the year that is ending was one of the worst for the economy. The restoration of parliamentary democracy by an independent judiciary is clearly a triumph for democracy and constitutional government.

Regrettably, the post-restoration weeks have seen continued political conflict between the President and the Prime Minister. This is detrimental to the economy. A more stable government is vital to restore economic stability and international confidence that is vital for economic development. Furthermore, the government has not shown any reformist tendencies to generate confidence of good economic management. At best, we could expect some economic stability and repair the damage done, rather than laying a foundation for robust economic growth.

The crisis is an opportunity for reform to achieve the country’s economic potential. Unfortunately, the year ends in economic uncertainty with little evidence of reform.