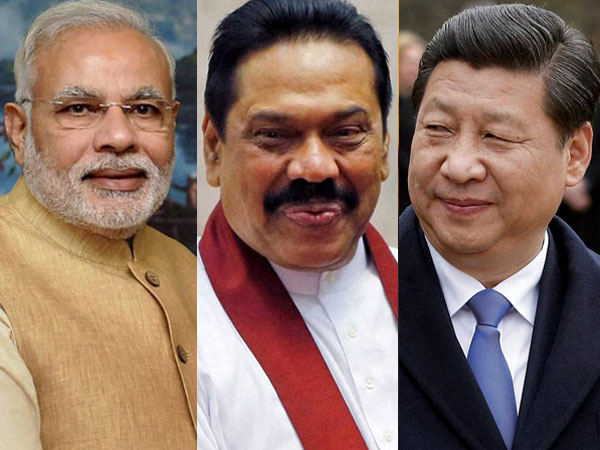 Sir, non-alignment has been the cornerstone of our Foreign Policy. It may be that there were times when we deviated from this policy, but that has been rare and has had its own consequences.

Generally, we have been steadfast in our adherence to the policy of non-alignment. We have maintained an equidistance and I would, in that context, like to pose the question, what has been the policy of the present Government? Has this Government, for narrow parochial domestic considerations, sacrificed this policy of non-alignment with consequences which can be dire for the whole country?

In fact, over the huge projects being undertaken by China in Sri Lanka, which are somewhat lacking in transparency, and even without being explicitly requested by Sri Lanka on loans with high rates of interest, it is alleged that some projects are very lucrative to some individuals.

I want to read, Sir, certain comments that appeared in “The Sunday Times” newspaper recently. This is what it says. I quote:

“Contemporary bilateral ties between the two countries, ….”
that is Sri Lanka and China.
“…….however, are neither straightforward nor transparent and key elements of the relationship have caused serious worry across the Palk Strait. New Delhi has always been wary of China’s geostrategic interests in South Asia. But nothing has raised its hackles more in recent times than China’s aggressive expansion into Sri Lanka and Colombo’s unquestioning acceptance of it.”

In another paragraph it says, I quote:

“The domestic picture is also disquieting. The most alarming aspect of the Sino-Lanka alliance is that citizens are kept deliberately ignorant of what is really going on. This might work for China which operates on the principle that what its people do not know will not hurt them. But it is not what Sri Lanka, once an open and vibrant democracy, needs.”

So, Sir, the view is being expressed by a number of people that insofar as the China-Sri Lanka relationship is concerned, many things were happening secretly and without the public knowing about it. By acting in this way, is 2 Sri Lanka preserving its sovereignty? Sri Lanka howls that its sovereignty is being breached by sections of the international community who merely call upon Sri Lanka to observe treaties and conventions to which Sri Lanka has voluntarily subscribed and which Sri Lanka is bound to honour.

It would be relevant, Sir, to look at the role played by China during the regime of President Mahinda Rajapaksa as compared with its role over a long period of time, including periods of Sri Lanka Freedom Party rule under Prime Minister Mrs. Sirimavo Bandaranaike and the subsequent rule of the SLFP under President Chandrika Bandaranaike Kumaratunga.

The total assistance extended by China to Sri Lanka during the period 1971 to 2012, around 41 years, was US Dollars 5,056 billion of which US Dollars 4,761 billion, approximately 94 per cent, was extended between 2005 and 2012, around seven years, that was during the term of President Mahinda Rajapaksa. The funding promised by China in the period 2012 to 2014 is said to be around US Dollars 2.18 billion, the majority as a loan; of the total funding in the period 2005 to 2013, only 2 per cent is grant while 98 per cent is loan. In contrast, I would like to look at Indian assistance to Sri Lanka. It is approximately US Dollars 1.3 billion, one-third of that amount is by way of grant.

Is this a clear indication of President Mahinda Rajapaksa’s insensitivity to the concerns of neighbouring India, recognized as the regional power in South Asia, or is it the pursuit of a deliberate, pre-determined programme to undermine Indian interests and thereby isolate India so as to free itself from obligations and commitments made to India not only in the interests of reconciliation, peace and harmony within Sri Lanka but also in the region? No country has greater links with Sri Lanka politically, economically, socially and culturally than India. Are these actions intended to undermine all these linkages which have their roots in both geography and history?

Sir, I want to pose this question. Is a position sought to be created where India will not be able to play any role in Sri Lanka in keeping with India’s role over the past three decades and consistent with India’s historical, geographical and cultural links with Sri Lanka?

Does President Mahinda Rajapaksa think that China would be supportive of his pursuing a narrow political agenda in Sri Lanka? This is the question that is most worrisome from the point of view of people who are concerned about the future. There is also a great deal of concern that such a course of action would not be in the interests of Sri Lanka, India or the region.

Of course, there is also the possibility of the very large loans that have been given by China to Sri Lanka being converted into equity and it is a matter of grave concern to many Sri Lankans who are concerned` with protecting the country’s independence in every way.

Sri Lanka claims that it will have operational control over many projects executed by China. To what extent this will be possible is questionable. The extent of indebtedness of Sri Lanka to China would result in Sri Lanka being denied the opportunity to exercise any such operational control.

There is defence co-operation between Sri Lanka and China which in recent times has received prominence. There were reports mid this year of the establishment of a Maintenance Facility in Trincomalee by China. This proposal had Cabinet approval. This would have been in contravention of the Indo-Sri Lanka Agreement.

A Chinese submarine along with a Chinese warship docked in the Colombo Port in September 2014. It docked again in the Colombo Port on its return. Though various assurances are given by Sri Lanka – when things that did not happen earlier happen now, they cause concern and raise the question of whether there is new thinking, whether it is sought to undermine and marginalize India by Chinese dominance – the million-dollar question being with what consequences eventually, both for India and Sri Lanka.

I want to raise, Sir, some other matters of concern, which are strategic in nature. Some of these matters reached some stage of finality when the Chinese President, Xi Jinping undertook a State Visit to Colombo on the 16th and 17th of September 2014. The first would be the Colombo Port and Harbour. As of now 70 per cent of the transshipment business in the Colombo Port is India-related. The South Container Terminal at the Colombo Port has been developed and for a period of 35 years will be operated by a consortium led by China and the Sri Lanka Ports Authority. It was here that the Chinese warship and submarine docked recently.

Hambantota Harbour and Port: For Phase I, China provided US 307 million, 85 per cent of the total cost of Phase I. Phase II would reportedly cost US 810 million. During President Xi’s visit in September 2014, a Supply-Operate-Transfer Agreement was signed, which will be valid for 35 years, and four out of the seven container berths would be used by a Chinese Company.

Colombo Port City Project: This is a mega project. It will result in the creation of a new city by reclaiming 233 hectares of land from the sea at a cost of US Dollars 1.4 billion. It was inaugurated by President Xi Jinping when he was in Colombo on 17th September 2014. Hundred and twenty five hectares would belong to Sri Lanka. Eighty eight hectares would be leased to China on a 99-year lease. Twenty hectares would be given o China on a freehold basis which means that almost half the land or a little less than half the land would eventually be under China’s control.

Maritime Cooperation: Sri Lanka supports China’s plan to build a 21st Century Maritime Silk Road. A Joint Committee is being set up on Coastal and Marine Cooperation to cooperate in search for wreckage, ocean observation, marine and coastal zone management. All types of surveys can be carried out. What are the implications of all these steps? The position would result in China acquiring not merely influence, but dominance from the West to the South of Sri Lanka. That would be the real position, not merely in some little place. These facts have established, Sir, the firm grip that China has over Sri Lanka. Is it firstly in Sri Lankan interests or in the interests of the Sri Lankan people, is it in the interests of our neighbour, India, the regional power in South Asia? What would be consequences of these steps? This is the matter, Sir, that I consider my duty to raise in this House. In the context of such activities, can we be said to be genuinely following a policy of non-alignment? And are we not sacrificing our stature and respect on the world scene for narrow parochial domestic considerations. Is this not indicative of a shortsighted and myopic vision of Governance that could have disastrous consequences for the whole country?

Despite several commitments made by the Sri Lankan Government- these commitments have been given in very clear terms to various sections of the international community, to the Secretary-General of the United Nations, to India- to bring about constitutional arrangements for the country that would enable all the people to live in this country as equal citizens this Government has been dragging its feet in complying with those commitments. There is a view that the Sri Lankan Government is emboldened to do so because China is prepared to be supportive of Sri Lanka in whatever circumstances. This is not fair and not what the Sri Lankans expect from a great power like China. We submit that China should use its goodwill over Sri Lanka in a more reasonable way so as to bring about 5 genuine reconciliation, peace and harmony between all the citizens in Sri Lanka and thereby enable all the citizens in Sri Lanka to live in peace and harmony
(Speech made by Hon MP R.Sampanthan at the parliament on 14th Oct 2014)