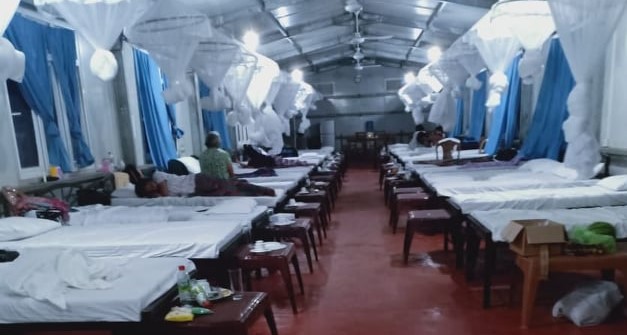 We all experience difficult situations and unexpected hardships at some point in our lives. In fact, it is an indispensable part of life. Our chosen response to these setbacks is what indicates whether we succumb to a situation or we overcome it. If anyone had asked me two months ago what my after-thoughts were of my well-dreamt and meticulously planned, wonderful tour of UK, to be follow up in a quarantine facility for two weeks in a remote Vanni District (Vuvuniya) was yet another reality would have been, totally out of context.! Recalling what I was forced to endure throughout in that period about two months back, made me write down the memories that left an indelible imprint on my mind and life.

After spending a 3-week wintry holiday in the UK in the company of a lovely British family whom I have known since I was a youngster, I was eagerly waiting to get back to my home country. This was about the time there were flight cancellations and border closures due to the rapid spread of COVID-19 in Europe as well as in Asia. I was informed by the airline staff at Heathrow Airport that all travellers from the UK will be sent to quarantine centres, and my innocent hope to see my family soon after my arrival did not prepare me to accept that reality. While flying, my thoughts were floating around those amazing moments I had spent in London amidst bone-chilling icy winds, majestic hills and rolling farmlands in the countryside and the lovely Daffodils. After an almost 12-hour flight, I landed at the Bandaranayake International Airport around 5.30 am on 16th March 2020. As I landed, an eerie feeling made me emotionally contracted, instead of the traditional Sri Lankan greeting of ‘Ayubowan’, the passengers were greeted by officials in hazmat suits and masks. The very first words I heard from the officials were “You have two options to choose from. You can either undergo the quarantine process here in a quarantine centre or you can go back to the country where you came from”. My stomach sank!

As I exited the plane, more than 10 people from the airline staff were holding posters indicating the names of several countries. Making the situation worse and melodramatic, there were media personals holding their cameras in front of the aerobridge as if to welcome a gang of criminals escaping a foreign land. To my great dismay, the first poster I saw indicated “England” shattering my final slight hope of seeing my family. The passengers who came from the UK and other European countries listed in those posters were taken separately to clear immigration, a separate place away from the airport terminal. I looked around to see if it was only me who was anxious. Everyone seemed anxious, not in words! When a public health official announced that all the passengers would be mass-quarantined for 14days, the situation became tensed creating a huge commotion as some of the passengers were astounded. Some tried to explain that the UK was a non-COVID risk country, while some argued that this decision is not consistent with the information given by the government of Sri Lanka. I became so helpless that finally I had to sit down perplexed, plugging both my ears with my two hands.

As a young woman who had never heard of the term ‘quarantine’ before, the entire concept was alien to me. My mind was painting grim pictures of the prospective quarantine centres because none of us had any clue as to what to expect. Feeling frustrated and hapless, I ritualistically followed the instructions given by the army officials and the public health authority. After filling in a health-declaration form and undergoing fumigation, we passengers were loaded into buses around 12.30 pm. I had a scrumptious meal with spicy Sri Lankan curries at the Rangiri Dambulla International Cricket Stadium which helped diminish my travel fatigue. It was around 5.30 pm when our bus reached the quarantine centre, the Vavuniya Periyakadu Army Camp. My first impression was a mixed one. We were missing essentials such as toiletries since none of us had been prepared to be quarantined. However, we were provided with facilities to buy our essential items from a mobile welfare shop which we used to call ‘Jangama Kadey’.

Our days commenced when two doctors or nurses came for temperature checks at 8.00 am. The medical team often reminded us to maintain a distance of one metre apart from one another and to wash hands regularly. It was literally the daily sermon. Breakfast, lunch, dinner and snacks were provided on time and returning home my mother was surprised to hear that I had consumed certain food I had hardly tasted while at home; especially, ash pumpkin and coriander (‘koththamalli’),

Initially it was hard to be positive about the extraordinary situation I was in, but I was gradually getting used to things in the camp by meeting and interacting with some wonderful people, gifted to our midst. Inzy, Mudzi, Ash, Amitha aunty, our wonderful nurse from UK and I were one family there. Often, us girls, spent our evening playing a game of cards or cricket. Seeing the sight of giant squirrels, troops of monkeys on huge trees was a daily occurrence. What I will never forget is the boiling heat! There were countless times I woke up with a shudder early in the mornings by the sound of a peacock punching the sheetrock or a group of aunties running after a shrub frog who has entered the dormitory. Inzy, Mudzi and I were nocturnal creatures, so we often tiptoed out of the dormitory and indulged in deep conversations under a tree, till midnight and beyond sometimes!

Looking back, I truly cherish all the bitter-sweet memories I have acquired in this quarantine centre. I learnt how to make the most of a difficult situation and that lesson will stay with me forever. I appreciate the effort taken by the Sri Lankan army soldiers who went the extra mile to make us feel at home, far away from home, to make us comfortable despite all the risks they had to take. On a lighter note, I have proof now, by certificate, to say that I have been through the quarantine process and been proved negative for COVID-19, which many of my country mates have yet to earn.

I would like to acknowledge Prof. Padmasiri Wanigasundera, Chairperson, Sri Lanka Development Journalist Forum and Prof. Abhaya Balasuriya, Director Administration, SDJF for seeding this idea to write about my quarantine experience. Thanks Hasarel, my beloved batch mate for encouraging me to maintain a daily diary during those aimless 14 days.

(All photos provided by the author)