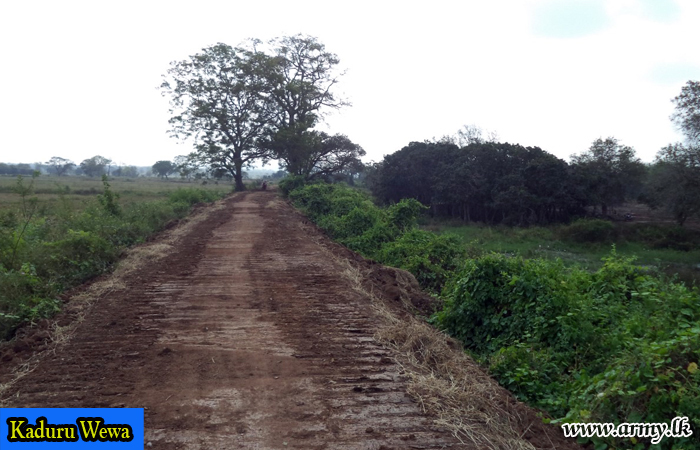 Commander of the Army  wants 1/3 of the Army be deployed for nation-building projects, says a report posted on SL Army web site. The report provides some details of  work SL Army’s on going construction work.

The report does not provide details of its own business activities or  civilian projects in the Northern province.

(SLArmy/5 01.18) Sri Lanka Army Field Engineers, as highly recognized and most sought service-providers in the country, in compliance with the Commander’s concept that 1/3 of the Army should always be committed to nation-building, are currently engaged in multifarious infrastructure improvement projects and renovation of more than 500 medium-size irrigational tanks in the Trincomalee District.

As of today (5), troops under the ‘Sirisara Pivisuma’ project in the Trincomalee District have completed the renovation of 15 such tanks after the programme kicked off in October 2016 on a directive from the Presidential Secretariat.

The repair work of 10 more medium-size tanks in Gomarankadawala, Padavi Sri Pura, Kantale, Morawewa and Pemaduwa areas is now in full swing with the support of tri-service members under the supervision of Brigadier Neranjan Ramanayake, Project Director, ‘Sirisara Pivisuma’ in consultation with respective state agencies.

Similarly, preparatory work of the proposed construction of 100 new teachers’ quarters in remote schools under the same five year-long infrastructure development programme in the Trincomalee district has already begun. Troops expect the completion of 10 such new quarters within this year, giving priority attention to the most needed remote schools.

At the request of the Presidential Secretariat, Army Engineers meanwhile are at present carrying out preliminary groundwork for erection of elephant fences in most vulnerable areas in Karadiyana-Kumburuyaya in the Trincomalee District covering a perimeter of about 250 km. The pilot project covering a distance of 30 km began recently in Gomarankadawala where elephant population is very high.

Similarly, those Field Engineers taking the responsibility and the challenge for the best interests of rural folk are presently renovating a rural road network under the same 5 year-long infrastructure development programme. By the end of last December, Army Field Engineers were able to effectively complete the full renovation of Ganthalawa – Saliyapura road (7km) and Ranathunga Kade road (5km). More such work would continue identifying priorities.

To keep pace with ongoing national projects, ‘Sirisara Pivisuma’, ‘Wana Ropa’, ‘Wasa Wisa Nethi Ratak’, ‘Pibidemu Polonnaruwa’ of ‘Rajarata Navodaya’, etc, as directed by the office of HE the President, Lieutenant General Mahesh Senanayake, Commander of the Army soon after assumption of his office, instructed Army Engineers to contribute to the nation-building tasks to be in line with his visionary concept, in which he wanted 1/3 of the Army be deployed for nation-building projects.

Each year, a sum of Rs 1000 m, out of an allocated Rs 5000 m, is to be used for those Army projects, expected to end in 2021 as stipulated under this five-year long programme.

Different assignments in Polonnaruwa, now in progress under the overall supervision of the Presidential Secretariat and also in close liaison with respective Village Development Societies, Grama Niladari officials, Samurdi officials, village chieftains and all other stakeholders at village level, are closely evaluated by the Central Environment Authority, University of Moratuwa, officials of the Irrigation Department, Agrarian Services Department and the Ministry of Agriculture.

Presidential Secretariat with the intention of uplifting economic standards and livelihoods of the rural-folk by improving the country’s infrastructure facilities, expects these projects to usher in a new era of prosperity and development in the rural sector with the cooperation of the Security Forces in the year 2021when completed.

Office of the Chief Field Engineer of the Army has thrown its full weight behind the implementation of all those projects, having deployed a fleet of 100 heavy machinery and vehicles, together with more than 4000 tri-service personnel.

In addition, Engineer troops are busy repairing and reconstructing Thimbiriyagedara Maha Wewa in the Mahawa Divisional Secretariat in the North Western Province, several school buildings, public places and other places of significance.

Meanwhile, Army personnel on the recommendations of the Mahaweli Authority and the Central Environmental Authority are busy uprooting fast spreading invasive plant, ‘Kalapu Andara’ which affects the eco system and wetlands in about 50 hectares of Thabbowa forest reserve, off Wilpattuwa.

In the same vein, on an initiative of the Commander of the Army, almost all island-wide Army camps under the self-styled ‘Parisara Niyamu – Haritha Sebala’ concept have begun cultivation projects in close coordination with the Army Directorate of Agriculture & Livestock.

During the period between June – December, 2017, a total of 18,000 saplings have been distributed among those camps. In addition, the Directorate of Agriculture & Livestock has begun cultivating 100 acres with indigenous paddy varieties in Kandakadu area under the ‘Wasa Visa Nethi Ratak’ concept. Led by Brigadier Buwaneka Gunarathne, Director, Directorate of Agriculture & Livestock, Army troops in liaison with corresponding state agencies have extended their maximum support to increase the forest cover by 32% in the future.

Similarly, the 57 Division Headquarters of the Security Force Headquarters – Kilinochchi (SFHQ-KLN) recently gave away more than 125,000 saplings of economic value to civilians and troops for cultivation in keeping with the ongoing national drive for cultivation.